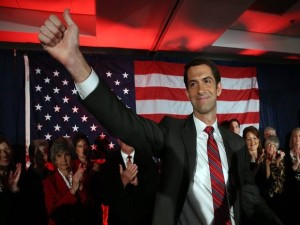 According to Tom Cotton, the newly elected senator, the justification for his now rather infamous letter is clearly demonstrated by Iran’s quest for regional domination, and as evidence for that claim he points to the fact that Iran already occupies Tehran.

Yes you read that correctly, apparently Iran has demonstrated their quest for regional domination by taking over Tehran.

Did he really claim this?

Yes he sure did … you will find him making this claim at 05:26 in the following clip …

It may indeed be a shock for some to learn that Iran is now in control of Tehran, but to most that is not actually all that great a surprise because Tehran is in fact the capital of Iran.

One can only wonder how this guy got elected, and I’m sure you need not be told which specific political party he is a member of.

Why are We mocking this Guy?

People make mistakes, that’s fine, and perhaps if not under pressure, he might have corrected what he said, but it was close to the end of the interview and there was no time left.

So why are we mocking and ridiculing Mr Cotton?

Not because he is stupid, I don’t believe he is and think if asked, he would indeed have realised his small blunder. No, instead we mock because he is a rather naive power hungry young senator who is willing to sacrifice anything and everything in order to make a name for himself, and by writing the letter directly to the authorities in Iran he endangered the ongoing process of negotiating Iran away from going Nuclear. If he had succeeded in scuppering that entire process then we might have ended up with Iran once again grasping for their Nuclear ambitions, and that makes Mr Cotton incredibly dangerous.

It may indeed be tempting to rant about this guy committing treason, but in the end I find laughing at him and mocking him to be a far more effective form of political criticism.

And there has been reply from Iran as well …

With tongue firmly planted in cheek, it is now open season on Mr Cotton …

The following is an open letter from the Islamic Republic of Iran to the United States Senate.

We received your letter from March 5. Our English is not the best, but we believe we understand your main points. Thank you for your interest in joining the Revolutionary Guard. We know you appreciate the many exciting opportunities the Guard provides to fight the Zionist-Crusader alliance while awaiting the coming of the blessed Mahdi, while also earning you money for college.

Unfortunately the Guard is not for everyone. We have stringent requirements that must be met. Per Reference 3563-3 Paragraph 5.9 and Surah 8 of the Noble Quran, you must be between the ages of 17 and 35, bearded, a Shia Muslim, a resident of Iran, and possess a diploma from your local madrasa or equivalent GED certificate. Our understanding is that you are citizens from the Great Satan of America, which could create a possible conflict of interest and would prevent you from obtaining any relevant security clearances.

Even if it does not, we are currently engaged in high level negotiations with your government’s political leaders and are concerned that allowing American mercenaries to enlist could needlessly endanger what is already a tense and delicate situation. We are sorry that we cannot simply add you to our ranks. Should you still wish to help the Islamic Republic, we suggest you contact our affiliated recruiters at Hezbollah.

We appreciate your interest in the Islamic Republic of Iran, and have included several free t-shirts with this letter. We hope you enjoy them and wear them in good health.

Actually, there really has been a reply from Iran …

Host: Senator, you think Iran and Iraq are the same thing?

Cotton: Well, why do you act like they’re two separate entities?

Host: Because they’re two separate countries who went to war with each other, Senator.

Cotton: Which one did we attack? It was Iran, wasn’t it…

Host: No, Senator; it was Iraq.

Cotton: Then why did we kill Saddam Hussein?

Host: Because Hussein was the president of Iraq…

Cotton: I don’t get it! I mean, if I knew Hebrew I could look at these writings from Zarif and tell you why Iranians are such liars…

Cotton: What difference does it make! Iraqis, Iranians, they’re both helping Isis in order to fulfill their ultimate goal of reviving the Ottoman Empire and restarting the Crusades!

Cotton: Don’t start piling the countries on me, now. Another day, another name I have to remember. All we’re saying is that the Middle East is a mess; let’s just finish it once and for all.

Hey now that’s a good start, we are joined up here with some of the folks in Iran, and are together mocking the same power hungry lunatics.