Stefan Lanka (pictured on the right-hand side above) is an anti-Vaccine advocate who was quite sure that Measles was simply a psychosomatic condition brought on by “traumatic separations.”, so he posted a challenge on his website – prove to him that measles is a virus and you get 100 thousand Euros. 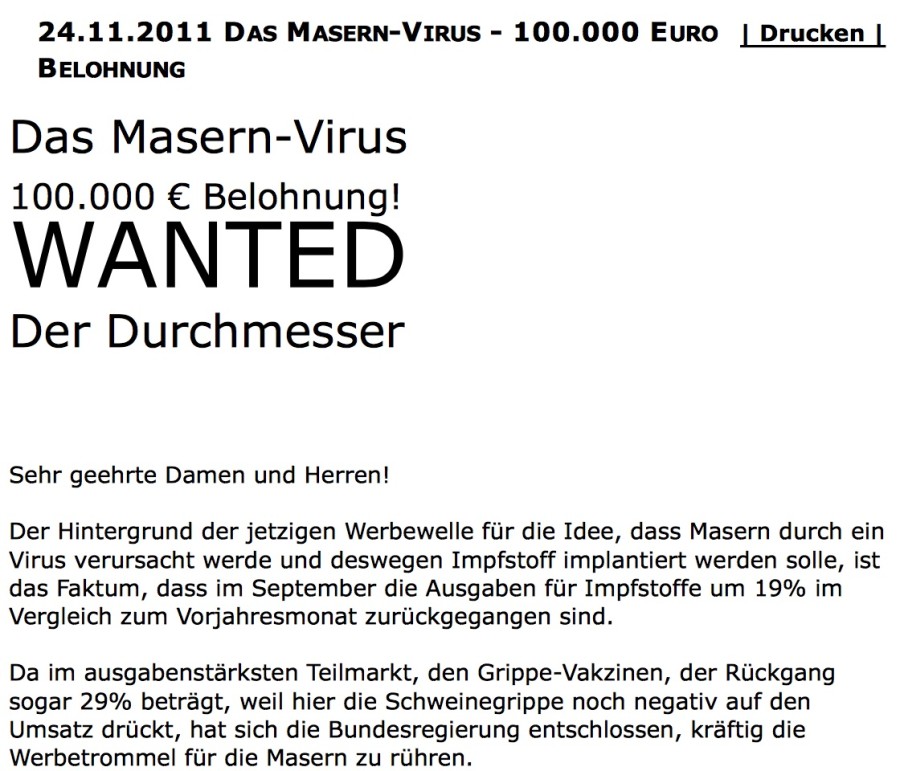 German doctor David Barden (pictured on the left in the picture at the top) took him up on this challenge. Dr Barden identified six separate studies that clearly demonstrated that measles is indeed a virus, and sent them all to Mr Lanka. In response Mr Lanka dismissed it all.

Ah but wait, publicly declared contracts like this are legally enforceable in Germany so Mr Lanka was taken to court in Ravensburg. There they went through the terms of the challenge and also the evidence provided by Mr Barden, then a few days ago on 12 March 2015 they finally issued a judgment that concluded that the proof was sufficient, and so Mr Lanka now must pay up.

All this really matters

As reported by the BBC …

A recent outbreak of measles in Germany has sparked a debate about whether vaccinations against the disease should be compulsory.

An 18-month-old boy in Berlin died last month of the disease.

The World Health Organization said it was “taken aback” by the 22,000 cases reported across Europe since 2014, urging to step up vaccinations.

Measles is a highly contagious infectious disease characterised by a high fever, a rash and generally feeling unwell.

The most severe cases can be fatal.

We might indeed think of measles as a harmless childhood illness, but it is not, even in 2013 96,000 children died from it and that is way down from the 545,000 deaths in 1990 and even further down from the 2.6 million deaths annually prior to the vaccination campaign, so actively promoting the idea that vaccines are bad, and that Measles is not caused by a virus, is quite frankly nuts.

This has been a great outcome – An idiot made a silly anti-science claim that if believed would not only do great harm but would also end up with an associated body count. He demanded evidence and promised to pay if that evidence was presented, then when that evidence was presented, he rejects it. He then gets taken to court and is legally proven to be an idiot, and now has a court order against him confirming that he is indeed an idiot – and now the entire world knows it.