Derren Brown, the famous illusionist, came out as gay back in 2007. At the time the rather inevitable happened; because he is famous, some of the tabloids ran with it ….

In 2007 he did a “discreet” interview with The Independent where he officially came out.

“If you don’t do anything at all then suddenly it’s like, it is it supposed to be a secret? How open can you be with your friends, because if the press suddenly find out, and you haven’t told them first, then it becomes a story,” he said.

Despite that, The Sun newspaper picked up on it and ran the news labelling it as an “exclusive”.

“It was a bit tacky, but it’s kind of what those sort of papers do anyway.

It was a non-story, and still is, but then that is what the tabloids specialise in doing – the promotion of news that is not really news at all and is instead stuff that is designed to motivate people into buying their paper for a bit of entertainment by tickling minds with stuff they did not previously know. Those such as Derren, simply shrug the shoulders, roll with it, and accept that it is part of the price tag that comes with fame.

Being gay is not a big deal for Derren, and so he gets on with doing what he does best, entertaining us all with some truly astonishing mentalist tricks.

There are some who start out being very impressed with all that he does, and then suddenly discover that he is gay. That discovery alone then changes how they feel about him, which is quite frankly absurd. 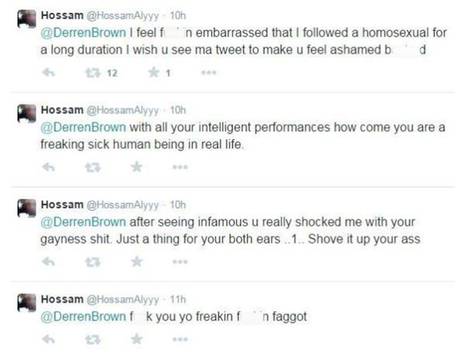 So how did Derren reply, did he tweet some abuse back at him?

Nope, instead he deployed a bit of humour instead and replied as follows … 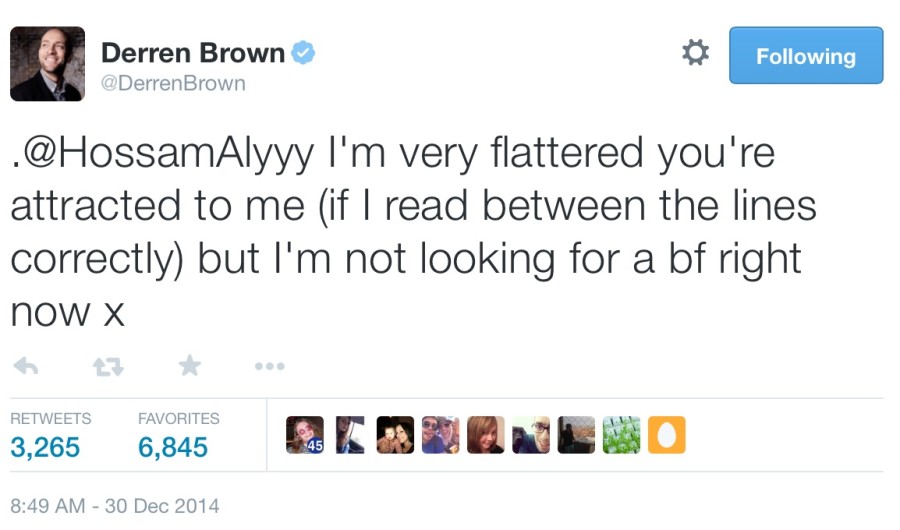 … and as a result everybody is now laughing with Derren at @HossamAlyyy.

Clearly @HossamAlyyy is not simply new to twitter, but also appears to be unfamiliar with the 21st century, and so it should come as no surprise to learn that he rapidly deleted his twitter account and fled back to the 7th century.

Satire, humour and mockery truly are the very best best ways to respond to bigotry and hate, and that is also why cartoonists such as Charlie Hebdo are deemed to be such a serious threat by religious fanatics – they enable us to laugh together at utterly absurd and rather silly ideas.