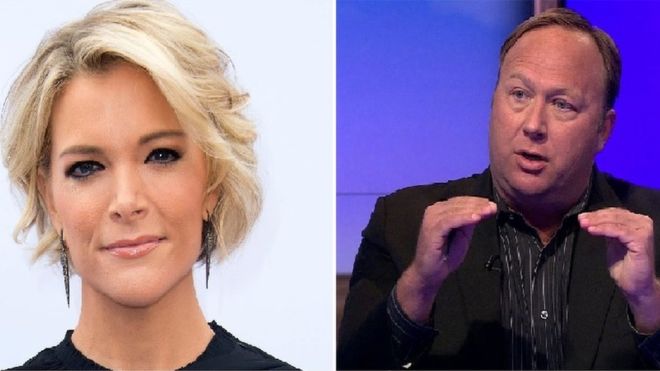 Megyn Kelly, in the role of an NBC anchor, has recorded an interview with Alex Jones. Where this attracts attention is that there has been a complete shitstorm even though it has not yet been broadcast.

Both names are perhaps familiar. Megyn Kelly quit Fox News and joined NBC last January. Her latest thing is to apparently interview controversial individuals, and so she started off by interviewing Vladimir Putin on 5th June. The latest has been her interview with popular conspiracy nut Alex Jones, and that is the interview that has generated rather a lot of heat for her and also NBC. As reported by the BBC …

The root cause behind the controversy here is focused specifically upon the claims that Mr Jones promotes regarding Sandy Hook.

The final report into the shooting concluded that Lanza had acted alone, and also noted “significant mental health issues that affected his ability to live a normal life and to interact with others“.

Arising from this tragedy were some quite frankly obnoxious and quite bizarre conspiracy allegations. There is no one conspiracy theory, but instead a collection of distinctly different ones that asserted different claims. Below is a small list, I’m not going to link to any of the actual claimants and grant them the oxygen of yet more publicity, but will instead point you at the Wikipedia page that covers the topic in detail …

Bizarre Claim: The US Government did it …

Bizarre Claim: Israel did it …

Bizarre Claim: Adam Lanza did do it, but had help from a second shooter …

Bizarre Claim: It was really those behind the LIBOR financial scandal attempting to silence a witness …

Bizarre Claim: It did not happen as described in the media …

There is more, and while the various theories put forward are all often quite different, they do have one common factor; they are all BS and do not hold together when critically examined.

Jones himself promotes a theory to his millions of followers that “no one died” at Sandy Hook Elementary School because the Uniform Crime Reports showed no murders in Newtown for 2012, and that the victims were “child actors.”. His “evidence” for this claim is utter nonsense. In reality, because the Connecticut State Police was the lead investigator after the attack, the Sandy Hook victims were included in Connecticut’s statewide records (under “State Police Misc.”) rather than under the Newtown statistics.

Reactions to the Interview

As you might imagine, when the parents of those that died at Sandy Hook found out that the guy who claimed that their children never existed was to be interviewed on Fathers Day about this, a huge backlash developed.

This piece of actual garbage encourages people to call my mom's death a hoax and harass other Sandy Hook families. Shame on you @megynkelly. https://t.co/uGmhqQAEeR

Here you go @megynkelly – her name is Ana Grace Márquez-Greene. Say her name- stare at this & tell me it's worth it. @nbc #SandyHook pic.twitter.com/mKrU63KWmA

She attempted to justify doing the interview …

Here is my statement regarding Sunday night’s interview: pic.twitter.com/iS2VfyLt6S

… but many are not convinced that Trump endorsing Jones is sufficient justification for giving him a platform to spout nonsense.

The Sandy Hook families are rather upset

The Independent relays their reactions …

The family of slain teacher Vicki Soto, posted a letter on Facebook, saying they were “disgusted and disappointed” in the decision to air the interview.

“Alex and his followers have done nothing but make our lives a living hell for the last four-and-a-half,” they said.

“This incessant need for ratings at the cost of the emotional well-being of our family is disgusting and disappointing. You should be ashamed of yourselves for allowing this behaviour.”

Nelba Marquez-Greene, whose six-year-old daughter, Ana Grace, was among those killed, said she feared the interview with Mr Jones would encourage other conspiracy theorists who have harassed her and accused her of being part of a hoax.

“Any time you give someone like Alex Jones a platform, their followers will double-down or increase their attack on grieving families,” she told the Associated Press.

“You can’t just put him in a box and say he’s just a character. He’s really hurting people.”

If you are going to grant a primetime platform to interview a conspiracy nut who has no qualms about making absurd claims about murdered children never actually existing, then it should come as no surprise to discover that rather a lot of people will quite rightly get upset about this. Actions have consequences.

No matter how hard she might wish it to be so, giving a megaphone to a conspiracy nutter is not journalism.