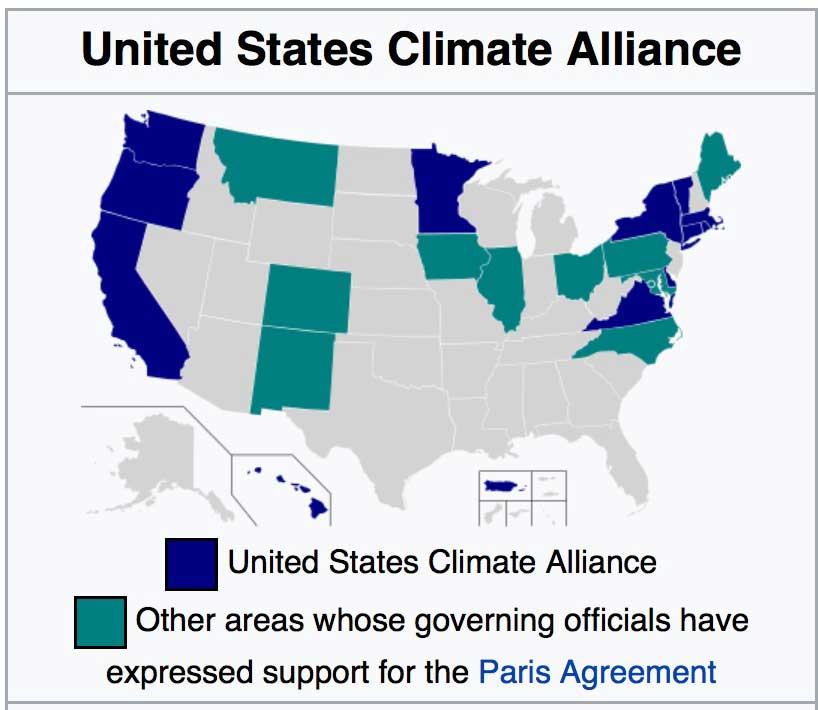 When I first wrote about this a few days ago, there was as such no name. Well there is now, it is being called the “United States Climate Alliance”. It is also growing.

There are a couple of key points to appreciate …

There is (of course) a Wikipedia page that lists them, and note that we do have red states in the mix …

Well yes that last one, Puerto Rico, is not a U.S. state as such but is included because they have signed up. Again, remember that this all crosses the normal political boundaries. Governor Ricardo Rosselló is quoted as saying

“As a governor who is also a scientist, I oppose the United States withdrawal from the Paris Agreement. Our administration is committed to protecting our environment, and we recognize that even small changes can have big, lasting effects on our planet.”

The following states, while not members of the Climate Alliance, have also pledged their support for the Paris Agreement.

This is happening, not just at a state level, but also at a city level. The Mayor’s of many cities have also pledged their support for the Paris Agreement and have formed their own alliance that takes a similar stance. Their list is extensive and include the 10 most populous cites in the US. Founded in 2014, the Mayors National Climate Action Agenda, has stated that it is committed to upholding the emissions goals of the Paris Agreement on climate change even if the United States withdraws from the agreement.

This is all very encouraging. It turns out that Climate decisions taken at a federal level are rapidly becoming irrelevant. People are not fighting against Trump, but instead are going one better, they are ignoring him and getting on with what needs to be done.

Here is that full press release …

The U.S. Climate Alliance announced that Connecticut, Delaware, Hawaii, Massachusetts, Minnesota, Oregon, Puerto Rico, Rhode Island, Vermont and Virginia have all joined the coalition, which is committed to upholding the Paris Accord and taking aggressive action on climate change.

In response to President Trump’s decision to withdraw from the Paris Accord, Washington Gov. Jay Inslee, New York Gov. Andrew M. Cuomo, and California Gov. Edmund G. Brown Jr. formed the Alliance to convene U.S. states committed to achieving the U.S. goal of reducing emissions 26-28 percent from 2005 levels and meeting or exceeding the targets of the federal Clean Power Plan.

With input from all participants, the U.S. Climate Alliance will also act as a forum to sustain and strengthen existing climate programs, promote the sharing of information and best practices, and implement new programs to reduce carbon emissions from all sectors of the economy.

“Those of us who understand science and feel the urgency of protecting our children’s air and water are as united as ever in confronting one of the greatest challenges of our lifetime,” Gov. Jay Inslee said. “Our collective efforts to act on climate will ensure we maintain the United State’s commitment to curb carbon pollution while advancing a clean energy economy that will bring good-paying jobs to America’s workers.”

“The President has already said climate change is a hoax, which is the exact opposite of virtually all scientific and worldwide opinion,” California Gov. Edmund G. Brown, Jr. said. “I don’t believe fighting reality is a good strategy – not for America, not for anybody. If the President is going to be AWOL in this profoundly important human endeavor, then California and other states will step up.”

“As the federal government turns its back on the environment, New York and states across the country are picking up the mantle of climate leadership and showing the world it’s possible to address climate change while also creating good-paying careers,” New York Gov. Andrew M. Cuomo said. “The U.S. Climate Alliance is committed to meeting the standards set forth in the Paris Accord regardless of Washington’s irresponsible actions. We welcome these 9 new members and look forward to collaborating and maintaining the momentum in the global effort to protect our planet, while jumpstarting the clean energy economy.”

“Connecticut has been a national leader in combating climate change and we have no plans of slowing down our efforts,” Connecticut Gov. Dannel P. Malloy said. “In the absence of leadership from the White House in addressing climate change, it is incumbent upon the states to take action in order to protect their residents. We remain committed to meeting the standards set forth in the Paris Climate Agreement because it is the right thing to do for not only the future of our state, but for the future of our planet. I am proud to stand with my fellow governors in support of efforts to reverse the harmful effects of global warming and to send a message to the rest of the world that we accept the science of climate change and we will not let the misguided beliefs of a few ruin our planet.”

“Delaware is the country’s lowest-lying state and with 381 miles of coastline, climate change is a very real threat to our future,” Delaware Gov. John Carney said. “As sea levels rise, more than 17,000 Delaware homes, nearly 500 miles of roadway and thousands of acres of wildlife habitat including our critical wetlands are at risk of permanent inundation. Rising average temperatures and an increase in extreme weather events also pose health risks to Delawareans, and threaten our economy. The U.S. should lead in the global fight against climate change. Delaware is proud to join this coalition of states providing that necessary leadership.”

“As the Commonwealth reiterates its commitment to exceed the emission reduction targets of the Paris Climate Agreement, today we join the U.S. Climate Alliance to expand on our efforts while partnering with other states to combat climate change,” Massachusetts Gov. Charlie Baker said. “After speaking with Governors Cuomo and Scott, our administration looks forward to continued, bipartisan collaboration with other states to protect the environment, grow the economy and deliver a brighter future to the next generation.”

“I am very pleased to announce that Minnesota will join the U.S. Climate Alliance, to uphold the tenets of the Paris Climate Change Agreement in our state,” Minnesota Gov.  Mark Dayton said. “President Trump’s withdrawal will cause serious damage to our environment and our economy. Nevertheless, Minnesota and other states will show the world what we can achieve by working together to conserve energy, to use cleaner and renewable energy, and to leave a livable planet to our children and grandchildren.”

“The ‘America First’ doctrine should put our children first too,” Oregon Gov. Kate Brown said. “Future generations deserve to inherit a world they can thrive in, not one that plays politics and ignores the fact our climate is changing. Despite the decision by the White House to retreat, it is our moral obligation to fulfill the goals of the Paris Agreement. Oregon will continue to make meaningful strides, with the rest of the world, to ensure our communities and economies adapt to meet the challenge of climate change.”

“Climate change is a real problem for all and requires immediate action to ensure future generations are left with a sustainable planet,” Puerto Rico Gov. Ricardo Rosselló said. Our administration is committed to protecting the environment. As a Governor, who is also a scientist, I value science and data as primary tools in the decision making process.  As such, I strongly oppose the withdrawal from the Paris Agreement. Our administration understands that all policy decisions, even those perceived to being small, can have big, lasting effects on our planet.  Puerto Rico, an Island that 3.4 million American Citizens call home, would suffer greatly from the devastating effects of rising sea levels.  But we all stand to lose if we don’t take meaningful action right now. We call upon all public officials across our nation to continue to support rules and regulations that protect our environment. As most of the world moves forward, our nation cannot sit idle and lag behind.”

“President Trump’s decision to withdraw from the Paris Agreement was a tremendous mistake. Rhode Island may be a small state, but climate change can have a big impact on our communities,” Rhode Island Gov. Gina M. Raimondo said. “We are determined to fight climate change from the front lines so that we can preserve our environment – including our Narragansett Bay – for future generations and create good-paying, future-proof jobs in the process. I’m proud to join Governors Cuomo, Brown and Inslee in this effort and hope other governors – from both parties – join as well.”

“Growing our economy and protecting our environment by supporting cleaner and more affordable energy and transportation choices can go together,” Vermont Gov. Phil Scott said. “If our national government isn’t willing to lead in this area, the states are prepared to step up and lead. I look forward to supporting continued bipartisan cooperation on these matters and thank Governor Baker, Governor Inslee, Governor Cuomo and Governor Brown for working collaboratively on this important issue.”

“As the first state in the Trump era to take executive action to limit carbon emissions and create clean energy jobs, Virginia is proud to join the Climate Alliance,” Virginia Gov. Terry McAuliffe said. “President Trump’s announcement to withdraw the United States from the Paris Climate Agreement does not speak for the states and cities that are committed to fighting climate change and paving the way for a new energy economy. If the federal government insists on abdicating leadership on this issue, it will be up to the American people to step forward – and in Virginia we are doing just that.”

National Geographic has published an article (dated 8th June) that explores this new US Climate Alliance.