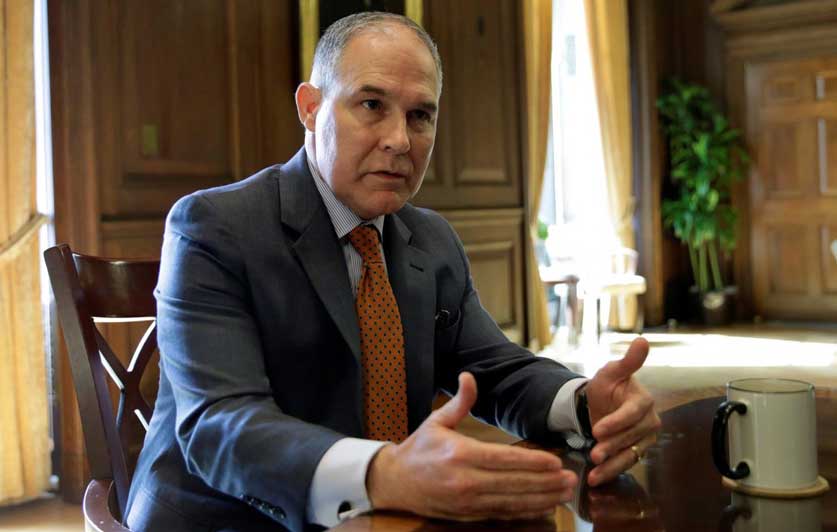 OK, let’s cut to the chase, the answer is “yes”, to the question, it is a truly daft idea, and yet it is perhaps also a clever bit of political theatre because it weaves an aura of both doubt and also respectability to an anti-science stance that does not warrant or merit either.

Let’s establish the background news here. As reported by Reuters and many other media outlets …

The U.S. Environmental Protection Agency is in the early stages of launching a debate about climate change that could air on television – challenging scientists to prove the widespread view that global warming is a serious threat, the head of the agency said.

… “There are lots of questions that have not been asked and answered (about climate change),” EPA Administrator Scott Pruitt told Reuters in an interview late on Monday.

“Who better to do that than a group of scientists… getting together and having a robust discussion for all the world to see,” he added without explaining how the scientists would be chosen.

You can find a transcript of the full Reuters interview with Pruitt here.

Flaw 1: A Debate is not how Science is done … ever

Objective truth is not something we get to vote about. Consider the idea that the earth is flat. There really are groups who seriously advocate this and adherents who truly believe it, so much so that all around the globe there is a rising membership within flat earth societies. (You can have a bit of fun by reading that last bit again, but slowly, so that you can savour the deep irony).

Let’s imagine a debate that presented an articulate flat-earth advocate against a scientist. Consider what happens when the flat-earther makes an emotionally enticing case and manages to defeat a scientist who had all the facts but no communication skills. Would that then establish that the earth was now flat?

Seriously, ask yourself that very question. If such a debate took place in front of millions and that was the outcome, would reality be altered even one jot?

Flaw 2: This is not a debate between equals.

Climate science is a robust well-established evidence-based discipline with many many decades of published peer-reviewed research. Climate denialism is generally an emotionally based rejection of the prevailing evidence that is often rooted in specific political beliefs or political tribalism.

So what does the scientific community think of this?

Buzzed reached out and asked …

Peter Gleick, a scientist who cofounded the Pacific Institute, an environmental think tank

…called Pruitt’s proposed debate “bullshit.” In an email, Gleick said that climate change has already been reviewed and assessed by “every national academy of sciences on the planet,” and is already debated “every day by the very process of science itself.”

“The effort by Pruitt and Trump’s EPA to pretend to put together a ‘debate’ is no more than another attempt to open the door to the voices of climate denial, delay, and confusion that have already postponed international action almost to the point of disaster,”

Michael Mann, a climatologist and geophysicist at Penn State University

…a debate is already going on and “it’s called science.” He also said the debate amounts to a “bad faith effort.”

“What Pruitt and his ilk really want is to stack the deck against mainstream science by giving cronies and industry lobbyists an undeserved place at the science table,”

Linda Duguay, who directs multiple environmental programs at the University of Southern California

“there is not much to debate” regarding the scientific consensus on climate change. Duguay also expressed skepticism that Pruitt and his team “would put together an honest forum on the subject.”

“The overwhelming consensus of the scientific community and the great majority of nations around the world that signed the [Paris climate agreement] accept it as a reality,”

John Seinfeld, a professor at the California Institute of Technology who studies the atmosphere

“there’s nothing to debate,” unless the discussion focused on “remediation measures.”

“Climate change is a done deal,”

debating “settled” scientific topics such as climate change “is silly, counterproductive, and perpetuates a false sense of what’s true and what’s not.”

John Oliver has already done a live TV debate on Climate change. He also made sure that it was a fair and balanced one.