Last December I was writing about the widening rift that had been measured in the Larsen C Ice Shelf in the Antarctic by NASA’s #ICEBridge. I highlighted the inevitable – the breakup of the Larsen C ice shelf,  and pointed out that this was part of the on-going process that had seen Larsen A disintegrate in 1995 and Larsen B go the same way in 2002.

The Larsen C mega-berg splintering has finally happened this week.

Details abound within major media outlets such as the Washington Post, The Guardian, CNN, and others. Even Rolling Stone is running with the news. I’ll strive to not simply replicate all that with a “me to” article, but will instead dig into the source of where this news comes from and what the discoverers themselves have to say about this event.

How do we know it has actually happened?

On the 12th July project MIDAS, a UK-based Antarctic research project, were the first to announce that this had happened – This is the alpha source for all the media news on this.

The basis for their announcement was data captured by the moderate-resolution imaging spectroradiometer (MODIS) which is on the NASA Aqua satellite. This is an instrument that is designed to image the entire earth every 1-2 days and so it is ideal for tracking major events such as this. MODIS captures images in the thermal infrared at a resolution of 1km. This initial discovery was later confirmed by NASA’s Suomi VIIRS instrument.

The MIDAS team have also been tracking the development of the rift over the last year using data from the European Space Agency Sentinel-1 satellites – part of the European Copernicus Space Component. Sentinel-1 is a radar imaging system capable of acquiring images regardless of cloud cover, and throughout the current winter period of Antarctic polar darkness.

Here is the separate ESA Sentinel-1 press release. There they explain a bit more of the backstory … 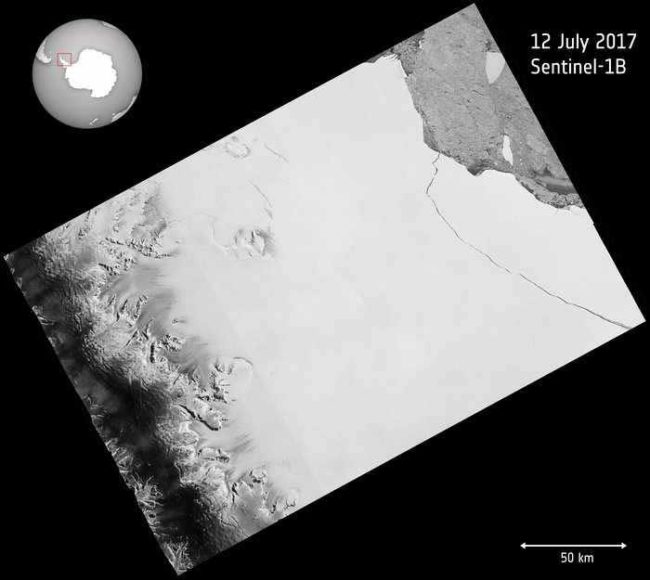 The fissure first appeared several years ago, but seemed relatively stable until January 2016, when it began to lengthen.

More importantly, as the crack grew, it branched off towards the edge of the shelf, whereas before it had been running parallel to the Weddell Sea.

With just a few km between the end of the fissure and the ocean by early July, the fate of the shelf was sealed.

“We have been anticipating this event for months, and have been surprised how long it took for the rift to break through the final few kilometres of ice. We will continue to monitor both the impact of this calving event on the Larsen C Ice Shelf, and the fate of this huge iceberg.

The iceberg is one of the largest recorded and its future progress is difficult to predict. It may remain in one piece but is more likely to break into fragments. Some of the ice may remain in the area for decades, while parts of the iceberg may drift north into warmer waters.

The recent development in satellite systems such as Sentinel-1 and MODIS have vastly improved our ability to monitor events such as this.”

Dr Martin O’Leary, a Swansea University glaciologist and member of the MIDAS project team, said of the recent calving:

“Although this is a natural event, and we’re not aware of any link to human-induced climate change, this puts the ice shelf in a very vulnerable position. This is the furthest back that the ice front has been in recorded history. We’re going to be watching very carefully for signs that the rest of the shelf is becoming unstable.”

“In the ensuing months and years, the ice shelf could either gradually regrow, or may suffer further calving events which may eventually lead to collapse – opinions in the scientific community are divided. Our models say it will be less stable, but any future collapse remains years or decades away.”

Nope, it was already floating, so it will by itself not contribute directly to sea level rising.

What happens now is that the remaining ice shelf will continue naturally to regrow. However, the MIDAS research team have previously shown that this new ice shelf configuration is potentially less stable than it was prior to the rift.  That means that there is now a risk that Larsen C will eventually follow the example of its neighbour, Larsen B, which disintegrated in 2002 following a similar rift-induced calving event in 1995.

Once the ice shelf has collapsed, that in turn removes a barrier that holds back the flow of glaciers that feed into it. The release of this non-floating ice will have an impact upon sea level, but only over a very long-term timescale.

The Larsen C ice shelf has broken away from Antarctica, a jarring reminder of why we must solve the climate crisis. https://t.co/3ddOminhX3

The last piece of the #LarsenC breakup is nicely shown in high resolution in #Sentinel1. Farewell iceberg A68! @ESA_EO @MIDASOnIce pic.twitter.com/FUzZUlT4E8

To give a sense of the true dimensions of the Larsen C iceberg, here's an animation based on real data, with something familiar for scale pic.twitter.com/OdQA07qhBb

An iceberg about the size of Delaware split off from Antarctica’s Larsen C ice shelf sometime between July 10-12: https://t.co/zVs9hClbpK pic.twitter.com/gQVGsZ6APO