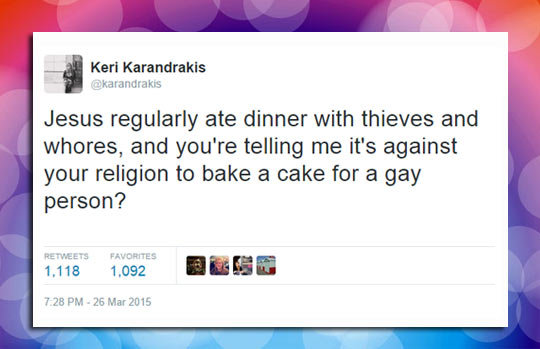 A rather common religious claim is that being gay is a lifestyle choice hence those who are gay are simply in rebellion against the “natural” order, but is this a factual claim?

What is of course true is that being gay is indeed a choice, but not in the sense that Christians mean. (Now please don’t yell, stick with me here). What is wholly factual is that while the precise mechanism that determines sexual orientation is not fully understood, it is generally accepted to be biologically causal. OK, if that is accepted, then what exactly do I mean when I state that it is a choice?

People are they way they are, and so by making a choice, I mean that people decide to either suppress who they really are and strive to conform to cultural expectations, or they come to terms with the feelings they have for others and choose to be as they feel.

You can test this yourself.

Write down the things that you like … ice cream, a specific song, the gentle caress of a summer shower cooling you down on a very hot day, the distinct aroma of roasting coffee as it wafts out of a coffee shop as you walk by, a specific place, a specific time, etc …

Now compose a second list of things that inspire you to throw up … that other song the really annoying one, sour milk, way too much chilli, etc…

If you were advised that the items on your list of likes was all evil vile stuff and anybody who liked any of that was profoundly nefarious and corrupt, and that only the items on the list of things you have a deep contempt for would mark you as pious and upstanding, then could you truly change your feelings?

You can of course choose to pretend, and wear a mask by playing a role, and do so to such a degree that you would successfully fool everybody, but in the end the feelings that lurk deep down inside would eventually bubble up and burst through. Now please don’t get hung up on the above, I’m not suggesting that a love of specific things above is on par with human sexual orientation and has a biological causal root, but rather I’m simply pointing out that liking something you do not like is often not a conscious choice, nor can you really opt to change it.

Now moving on, lets go to the source and think about the book that has inspired much thinking.

Yes the above is empty because Jesus does not have one single word on the topic … nada, nothing, zilch.

Well actually that is not strictly true, there is one very obscure verse , Luke 17:34 reads …

I tell you, in that night there shall be two men in one bed; the one shall be taken, and the other shall be left.

… well yes that’s a bit of a stretch at best, but still, Jesus does indeed mention two guys sharing a bed and one of them being raptured, so clearly he has no problem with them sharing a bed at all, so much so, that one gets to go to heaven, and it is a stretch because clearly it was just a metaphor used to illustrate something else (but still damn funny that Jesus is quoted as using this rather odd metaphor).

There are of course other verses that do indeed suggest that being gay is an abomination, but we also find verses that suggest eating shellfish is equally of abomination and so it is indeed rather odd that the shellfish verse is happily discarded by almost every single variation of Christianity, yet the gay one is not … so how does that work, how do specific verses in this supposedly final definitive word get ignored and only specific ones get quoted?

One rebuttal is that the shellfish guidance was specifically old testament, and that the anti-gay theme gets carried over into the new testament, but to be frank that is pure BS because there is rather a lot in the NT that most modern Christianity also happily discards, for example the pro-slavery stance (“slaves, obey your masters”). So no, there is no rational justification for leaning upon the bible as the definitive word that trumps everything else because doing so puts those that do this in a very dubiously unethical pro-slavery position (many might not grasp that, but it is indeed the case).

When it Comes to being Gay – We all have a choice

Nobody can duck making a choice on this topic, and so you can choose to either recognise that all humans, regardless of their gender or sexual orientation, are entitled to equal rights, or you can instead choose to not embrace that idea. The choice you make is one that will mark you as either a decent human being or not, and that is not a judgement that gets pronounced in an after-life by a deity, but rather is a judgement that you will self-certify yourself with in the here and now.

In the past you might indeed have condemned those that are gay for religious reasons, but such a stance need not remain, and you can now opt to make a different choice, one that involves an acceptance of those whom you previously reviled, and by doing so become a far better person.