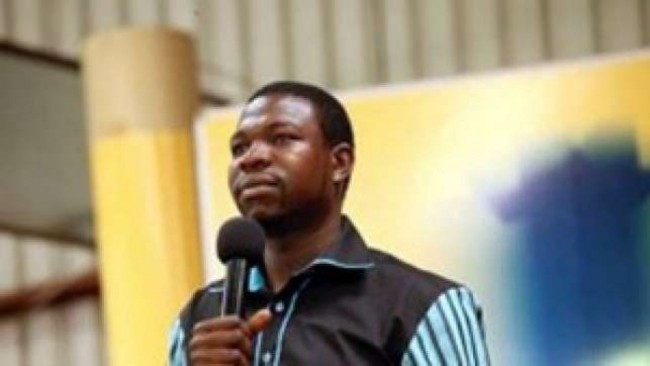 The astonishing part of this story not only concerns the observation that some religious nut truly believed that he could be buried and then resurrected, but that he also found a few others who were prepared to buy into the absurd idea and bury him alive.

It all concerns Shamiso Kanyama, a self-appointed “prophet” who … well, let’s just skip on over to the press story …

The cleansing ceremony, according to witnesses, was to be carried out on that very day since there was going to be a memorial service for a departed family member the following day.

The court heard that the five men allegedly wanted their home exorcised of evil spirits hired by their father, Zvidzai Muchengeti, to cause mysterious deaths in the family.

Kanyama allegedly told the family that the cleansing process entailed him being buried alive in a pit dug at the homestead to enable him to summon more powers to drive away the evil spirits.

Zvidzai, who has turned State witness, told the court that Kanyama assisted in the digging of the pit and later prayed before he jumped inside, lay himself face down and ordered the family members to cover him with soil.

“He pegged a grave-shaped pit in front of my hut and asked for help to dig the pit. Deceased requested to be buried alive so that he would gain power to drive away the evil forces,” Zvidzai said.

Justice Tagu heard, as the men were in the process of filling the pit, one Joseph Taderera asked the five men to stop, but Kanyama urged them on.

“I warned the men of the danger that would result in their actions, but my advice fell on deaf ears because Kanyama shouted at me saying I was disturbing his angels and he urged them to continue filling the pit saying he would later come out alive,” Taderera told the court.

Taderera said the family later dug up the pit and discovered that Kanyama was already dead.

Now a quick side note – This is not new news. The reason I’m writing about it now is because it popped up in my FB feed and so I’m blogging about it as an example of the degree of disconnect that can take place when you embrace ideas that are simply not true at all. Note that this is not your normal Darwin award, in the sense that one individual did something so utterly stupid that he ended up dead, but rather that he persuaded his followers to buy into such nonsense and they happily obliged.

There are a couple of distinct possibilities that explain this …

Whichever it was, we will never really know, but quite frankly neither is really palatable and so as a result those that participated went to jail.

Did this really happen?

Being skeptical about such stories is always wholly appropriate, and so I do recommend keeping in reserve an appropriate degree of skepticism. It did make to press in the UK, for example here it is in the Guardian, so I’d be inclined to lean towards … probably true. There is also the thought that people can and do both promote and practise crazy beliefs, and so it is quite believable.

So where should we draw the line?

This does however draw out an interesting debate and discussion. Assuming that we all embrace the idea that people should be free to believe whatever they wish, then at what point should we (society) step in and prevent them from doing harm to either themselves or others? It might indeed be tempting to strive for clear common sense rules, namely, you don’t get to impose absurd beliefs upon others, but if you wish to impose it upon yourself, then best of luck …. except most societies aren’t very good at working that out (and before you proceed to cast any stones towards others, pause and remember that here in the UK we have 23 Bishops sitting in the House or Lords on the sole basis that they truly believe that their imaginary friend is quite real).

So what happens at the moment, how does it all currently work?

If an individual manifests a deeply acute psychosis (disconnect with reality), then they generally tend to be left alone until a crisis point is reached and a medical intervention is required. For example, a psychosis might motivate an individual to think that they are being following by red cars, but as long as they drive safely, no harm is done. If however, they take it to the next level and perceive that the postman is not just delivering mail but is here to attack them, then they might attempt to do some serious harm to the postman, and so a crisis point is reached. Police are called, and they in turn get doctors involved who will access the individual. If there is a medical consensus, then the individual will (in the UK) be sectioned under the mental health act. (I know about this because I was at one point sadly involved in getting somebody sectioned who desperately needed help)

The process usually starts because your GP, a family member, a police officer or psychiatrist is worried about your mental health. The decision is usually made (other than in an emergency) by two doctors and an Approved Mental Health Professional (AMHP). One of the doctors must be specially certified as having particular experience in the assessment or treatment of mental illness. If possible, one of the doctors will already know you. The AMHP is usually a social worker, but could be a mental health nurse, psychologist or occupational therapist.

Who decides in an emergency?

It depends on where you are.

OK, back to my original question – where should we as a society draw the line?

The challenge is that there needs to be a balance struck between somebody who is simply eccentric and completely harmless, and somebody who is at risk of doing serious harm to either themselves or others. Because there really is no easy way of working that out, the do-nothing option tends to prevail until that ceases to be a viable option.

So what about our resurrection preacher, could anything have been done to prevent the outcome?

“I warned the men of the danger that would result in their actions, but my advice fell on deaf ears because Kanyama shouted at me saying I was disturbing his angels and he urged them to continue filling the pit saying he would later come out alive,”

… so clearly at least one person was thinking, “No wait, this is crazy” and attempted to intervene, but sadly nobody would listen to him until it was too late. The specific problem in this case is that religion is one area that gets a free pass when it comes to crazy claims, and it is under its banner that the utterly absurd is permitted to thrive and flourish and utterly absurd ideas are deemed to be just fine and socially acceptable.

Perhaps if we were prepared as a society to challenge that, then quite a few other things would also quite naturally fall into place as well, but remember, once again we are back to “freedom of thought”, namely that people should be free to believe whatever they wish, so I’m not suggesting that we strive to purify all thinking, but rather that we while we should strive to nurture rationality as the high ground by challenging the absurd when it pops up in a social context, we should also accept the eccentric as just fine as long long as no harm is being done.