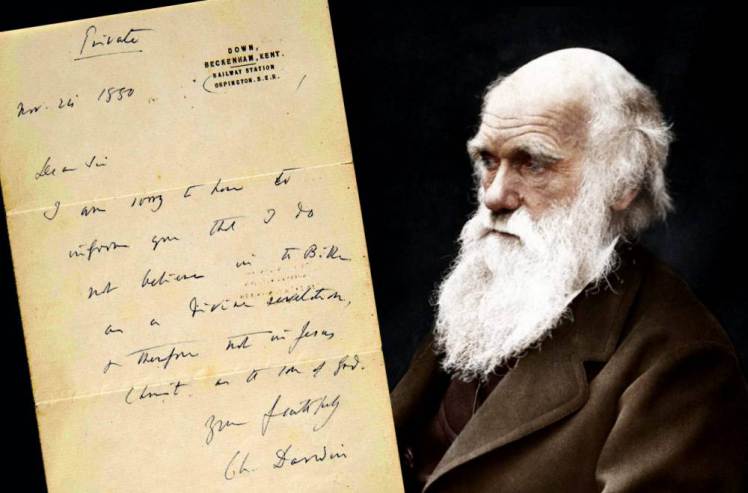 On 23rd November 1880, Charles Darwin received a letter from a barrister named FA McDermott. Within it he was asked to bluntly state if he did or did not believe…

The reason of my intrusion—which I trust you will pardon—is this. I have a great desire to read your books—the more so after finding (in his Life written by his wife) that Charles Kingsley strongly recommended them—but I am a busy man & not at all a clever man, and if I am to have pleasure in reading your books I must feel that at the end I shall not have lost my faith in the New Testament. My reason in writing to you therefore is to ask you to give me a Yes or No to the question Do you believe in the New Testament. If you could answer me Yes I should most gladly enter upon the study of your wonderful books but without that assurance I fear my brain is not fine enough to argue out doubts which might be suggested by your works but if I can say that the author of these doctrines believes as I do that Christ was the Son of God, I can say it is only in matters of detail that Mr Darwin differs from Charles Kingsley and I may read with full pleasure of all the wonders of nature which he has collected.

So you will write on the back of this page Yes or No you will be doing a real kindness which I will certainly not abuse by sending a paragraph to the theological papers headed “Mr Darwin on the New Testament,,

He replied as follows the next day …

I am sorry to have to inform you that I do not believe in the Bible as a divine revelation, & therefore not in Jesus Christ as the son of God.

What prompts this posting?

Well basically because Darwin’s response, the letter itself, went up for auction a couple of days ago and has been sold for £125,000.

Of note is that Mr McDermott kept his word, and as promised, he did not publicise the reply he received… ever.

Why is it interesting?

Well because there has always been doubt regarding Darwin’s specific religious beliefs and so there is an entire Wikipedia page dedicated to that topic. If we read that, then we find …

Though reticent about his religious views, in 1879 he responded that he had never been an atheist in the sense of denying the existence of a god, and that generally “an Agnostic would be the more correct description of my state of mind”.

… and yet here clearly stated in this letter written in 1880 a bit later, he is stating that he does not believe in either the bible or Jesus.

Here is some further insight on his thinking on it all …

In uncharacteristically bold discussions after dinner Darwin asked his guests “Why do you call yourselves Atheists?” When they responded that they “did not commit the folly of god-denial, [and] avoided with equal care the folly of god-assertion”, Darwin gave a thoughtful response, concluding that “I am with you in thought, but I should prefer the word Agnostic to the word Atheist.” Aveling replied that, “after all, ‘Agnostic’ was but ‘Atheist’ writ respectable, and ‘Atheist’ was only ‘Agnostic’ writ aggressive.” Darwin smiled and responded “Why should you be so aggressive? Is anything gained by trying to force these new ideas upon the mass of mankind? It is all very well for educated, cultured, thoughtful people; but are the masses yet ripe for it?” Aveling and Büchner questioned what would have happened if Darwin had been given that advice before publication of the Origin, and had confined “the revolutionary truths of Natural and Sexual Selection to the judicious few”, where would the world be? Many feared danger if new ideas were “proclaimed abroad on the house-tops, and discussed in market-place and home. But he, happily for humanity, had by the gentle, irresistible power of reason, forced his new ideas upon the mass of the people. And the masses had been found ripe for it. Had he kept silence, the tremendous strides taken by human thought during the last twenty-one years would have been shorn of their fair proportions, perhaps had hardly been made at all. His own illustrious example was encouragement, was for a command to every thinker to make known to all his fellows that which he believed to be the truth.”

It is of course all rather interesting to understand Darwin’s thoughts on belief, but I do feel that I should add one other rather important observation.  The opinions and beliefs of others does not establish something as factual, even when it does align with your own beliefs or lack of belief, and so I would characterise this as human interest.

When it comes to verifying religious claims, well that takes evidence, and so far (like Darwin) I don’t find any at all.