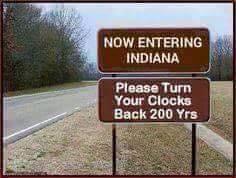 The signpost above is of course a joke and does not actually exist, and while we might laugh, we also need to remember that a rather serious point is being raised.

So the context here is that Republican Gov. Mike Pence has just signed into law the freedoms for religious beliefs law. The very vocal opposition that has risen might indeed appear odd because they are not the first state to do this, and are in fact the 20th state, so why the fuss this time?

It appears to have become a rallying point and so a line has now been drawn in the sand and this latest enactment was the wrong side of that line. The result is not just individuals protesting, but also various corporations have declared their intent to respond …

The above are just some of the big ticket items, they are not alone …

and would you believe, even the State of Indiana’s own tourism board.

“This bill is not about discrimination, and if I thought it legalized discrimination in any way in Indiana, I would have vetoed it. In fact, it does not even apply to disputes between private parties unless government action is involved. For more than twenty years, the federal Religious Freedom Restoration Act has never undermined our nation’s anti-discrimination laws, and it will not in Indiana.

The ever so slight flaw in his claim is that it is not factual at all, because the legislation itself will enable anyone to discriminate against anyone else, with no fear of government intervention or punishment, merely by citing their sincerely held religious beliefs.

You can check that by reading the text of the act yourself.

Yes sorry, you will swim through some legal soup there. OK, so what do those that are close to this say about it?

We already know that Gov Pence claims “This bill is not about discrimination, and if I thought it legalized discrimination in any way in Indiana, I would have vetoed it.“, but is he right? Well here is what others close to all this are saying …

While the supporters of this misguided act may think that today’s bill signing should put everyone’s fears to rest, I think our problems are only just beginning. I think we are opening a Pandora’s Box that will have lasting implications for our state for years into the future.

The governor and other advocates for SEA 101 already have ignored the pleas for common sense that have come from a variety of sources. It is not very often that you see the mayor of Indianapolis, Cummins Engine, Eli Lilly, the Disciples of Christ, the Indianapolis Chamber of Commerce, and the organizers of the Gen Con convention in perfect harmony, but they are in their belief that this measure sends the wrong message to people about Indiana.

SEA 101 will allow individuals to ignore any law they choose, simply because they feel it conflicts with their religious beliefs. It will pave the way for intolerance of others.

Others have noted in great detail the kinds of problems that will result for people in same-sex relationships. During debate on this bill in the House, I added my concerns that it would hinder our efforts to protect the health, safety, and welfare of our children.

These concerns have been roundly ignored by the supporters of SEA 101. We are told that we should not worry about such things.

But there have been incidents in other states that mirror what I feel could happen here. Not long ago, I read an account of a same-sex couple in Michigan who were denied pediatric care for their 6-day-old daughter because of the physician’s beliefs. There were no laws to protect the couple from this discrimination.

I fear that with passage of this bill, we are going to make it easier for people to use the guise of religious freedom to abuse and neglect others, refuse medical service, deny others employment or housing, and even say they won’t serve others in a restaurant.

There will be one group of people I see benefitting from today’s passage. I imagine the legal community is looking forward to having a field day with lawsuits that address various aspects of what will result from this bill. That should not make anyone happy.

We are allowing people to discriminate against others under the phony cover of religious belief.

This is progress? To conjure up images of people being denied service at lunch counters?

Of course, none of this will register with the misguided souls who crafted this outrage. The dismay of interests as diverse as Cummins Engine, the Disciples of Christ Church, and the organizers of the Gen Con convention mean nothing to them.

They will remain blissful in their ignorance. They have created a problem where none existed, except in their old-fashioned thinking.

Today’s news will delight one group of people above all. This will be a gravy train for Indiana’s lawyers, as they line up to defend this law. We will keep our expensive court system busy.

But will this help put more Hoosiers to work with good-paying jobs? Does it show kindness and compassion for others? Does it demonstrate to the world that Indiana is a place where people should want to live and work?

All this will bring our state is embarrassment and even shame. I hope it was worth it.

The timing of this legislation is all important to understanding its intent: the bill was introduced as a backlash reaction to achieving marriage equality for same-sex couples in Indiana,” said Jane Henegar, ACLU of Indiana executive director. “We are deeply disappointed that the governor and state lawmakers have been tone-deaf to the cries of legions of Hoosiers–including businesses, convention leaders, faith communities and more than 10,000 people who signed petitions against the bill–who say they don’t want this harmful legislation to impair the reputation of our state and harm our ability to attract the best and brightest to Indiana.

While on its face the law is constitutional, only time will tell the full consequences of the state RFRA. It poses harm to our reputation as a welcoming state that is open to everyone and it disrupts the balance that respects individuals’ freedom of religion without jeopardizing others’ freedom from discrimination. The ACLU will remain vigilant to the effects of SB 101 and we will continue to push lawmakers and the courts until all members of the LGBT community receive the Constitution’s full protection from discrimination and unequal treatment. We have been fighting for the LGBT community for over seven decades. We will keep on fighting to end discrimination wherever we see it, for as long as it takes.

Indeed yes, the State of Indiana has sent out a very clearly negative signal, and having sown those seeds, they now reap the harvest, it will not only greatly impact the reputation of the state, but will also result is a considerable degree of commercial impact as well now that various corporations have declared their intent to stop investment and to all fully withdraw.

They may not have been to first to enact such a bill, but they have now very much become the lightening rod for legislation that  enshrines into law the idea that religious belief trumps all other concerns. Many are now very clearly standing up and saying “No, you don’t get to use irrational beliefs as justification for discrimination“. The wider tide of events is very much moving towards a culture that rejects all discrimination, even the religiously motivated variations, and rather sadly for the folks in Indiana, their representatives are vigorously pushing against all that and making them a complete laughing stock of the entire nation.