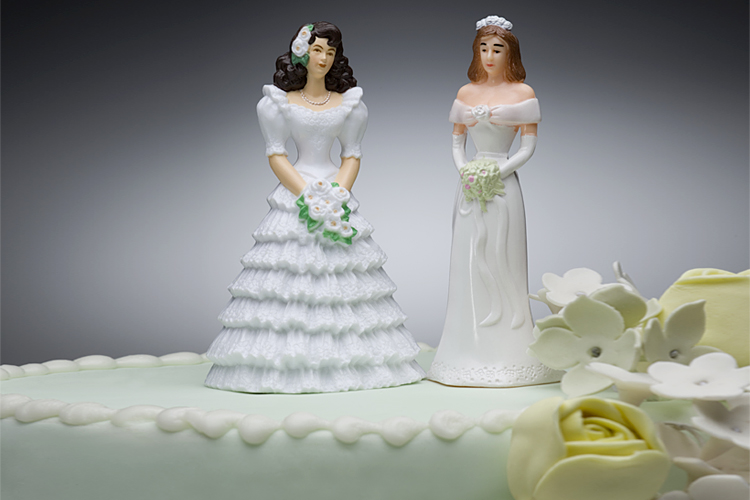 Often associated with a controversial issue is a narrative that is not wholly factual, but instead panders to a specific stance, and is popularised because it helps to protect an irrational position. There is also a full conversation, one that includes all the facts, and unless you are familiar with that full conversation then there is a considerable possibility that the false narrative will potentially fool you.

We now have judgement in the case of the Christian bakers in Oregon who refused to bake a cake for a couple on the basis that they were gay. The popular narrative over at Breitbart is one in which …

the fascist state of Oregon  is ramping up its persecution campaign against Christian bakers who declined to bake a wedding cake for a same sex lesbian couple. Aaron and Melissa Klein, the owners of Sweet Cakes by Melissa, have been told that if they don’t pay the $135,000 awarded to the lesbian couple who sued them, a lien will be placed against their home next week.

Speaking to Todd Starnes of Fox News, Klein said that the case in on appeal and the couple is worried that if they win the appeal, they will never get their money back. ” “This is intimidation and bullying – that’s exactly what it is,” Klein said.

The fascist state of Orgeon has also placed a gag order on the Kleins that makes it illegal for them to talk openly about their desire to participate and profit from same sex weddings through their small business:

“The Commissioner of the Bureau of Labor and Industries hereby orders [Aaron and Melissa Klein] to cease and desist from publishing, circulating, issuing or displaying, or causing to be published … any communication to the effect that any of the accommodations … will be refused, withheld from or denied to, or that any discrimination be made against, any person on account of their sexual orientation,” [Administrative Law Judge Alan] Avakian wrote.

To many this sounds like the oppression of a poor couple being put upon by the evil state and also the “Gaystapo” (yes, they actually use that word in the article), and so I’m sure you can imagine how rhetoric such as the above would indeed rile up the mob.

Oh but wait, the above narrative is incomplete and not wholly factual.

The facts are that this “loving” christian couple, started using, and continued to use, the media to announce that they had happily discriminated against the couple, naming them and also publishing their home address on their Facebook page, and so opened up an avenue for every anti-gay kook and crank out there to proceed to harass the gay couple. As reported by Oregon Live …

— Reports of death threats. In testimony Tuesday, Rachel Bowman-Cryer said she and her wife received death threats as media attention and criticism from strangers escalated in the months after the story went national in January 2013.

She said the threats were part of a stream of “hateful, hurtful things” that came after the couple’s contact information (home address, phone and email) was posted on Aaron Klein’s personal Facebook page. She said she feared for her life and her wife’s life.

— Concerns for foster children. Also on Tuesday, Rachel Bowman-Cryer disclosed that she and Laurel felt an even greater level of stress because they were foster parents for two young girls and feared they might lose the children.

She said they spoke to state adoption officials who told them it was the couple’s responsibility to protect the children and keep privileged information confidential, even as their own privacy was threatened by news coverage of the case.

“You have very little control over what the media says or does,” Bowman-Cryer said. She said she and Laurel’s biggest concern was “that nobody would know we had these children.”

The couple has since legally adopted the girls, who are now 8 and 6 years old.

In other words, this $135,000 fine was issued against the owners of the bakery for their behaviour after the initial refusal to bake a cake for the couple, and was not just because of that. RawStory gets it right …

The anti-LGBT owners of an Oregon bakery were not fined simply for refusing to sell a wedding cake to a same-sex couple – they were ordered to pay $135,000 in damages for causing their would-be customers emotional distress.

… After the Oregon Bureau of Labor and Industries handed down the order last week, Aaron Klein claimed the ruling was an example of the “persecution of Christians” in the U.S.

However, the ruling shows the bakery owners had made Laurel and Rachel Bowman-Cryer the victims of persecution and makes clear the payment was compensation for damages and not a fine or civil penalty

You can also fact check

You need not lean any media stories, but can instead read the actual ruling itself in full – you can find it here as a PDF – it takes you though the entire saga step by step.

If you are still truly struggling over this issue, then try this. Substitute the word “gay” for another different word such as “black”, or “hispanic”, and ask yourself if you feel comfortable with any business discriminating on that basis.

People can and do change their minds and permit empathy to finally trump bigotry, but sadly some such as these bakers, permit dogma to reign supreme. They can indeed retain the freedom to truly believe whatever they wish, but what they don’t get to do is to both discriminate and to also then continually harass in the media and publish a home address on Facebook and thus declare it to be “Open Season”.