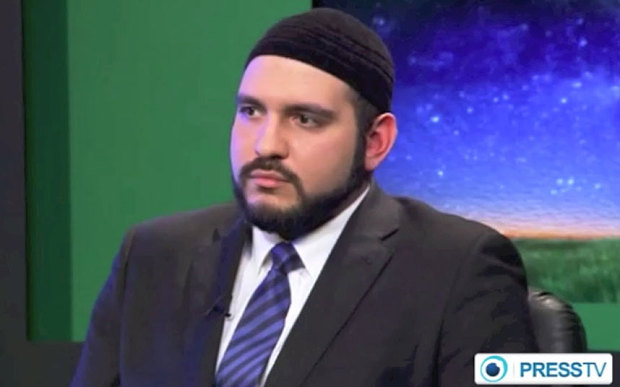 If looking for an answer to the question, I’m afraid I quite honestly don’t have one, and yet I should know because at one point in my life I did go though security vetting, and did indeed sign the official secrets act, and no I can’t tell you why, but then that is perhaps the point, and if I did actually tell you why, you would simply scratch your head and wonder why anybody would bother declaring it a secret in the first place.

So the story that prompts my pondering today is an article in the Telegraph entitled, “By day, at heart of counter-terror policing. And by night, preacher of extremism”, and concerns Abdullah al Andalusi (pictured above). The UK government has a department whose remit is to police the police by checking their readiness for any terrorism activities, and the big reveal is that apparently this department, Her Majesty’s Inspectorate of Constabulary (HMIC), employed Abdullah al Andalusi and yet were wholly unaware of what he did when not at work …

By night, he taught that the terror group Islamic State of Iraq and the Levant (Isil) was “no different to Western armies,” said that “kaffirs,” non-Muslims, would be “punished in hell” and claimed that the British government wanted to destroy Islam.

By day, using a different name, he went to work for the same British government at the London offices of Her Majesty’s Inspectorate of Constabulary (HMIC), the official regulator of all 44 forces in England, Wales and Northern Ireland.

So here is what happened …

HMIC admitted that Mr al Andalusi, whose real name is Mouloud Farid, had passed a security vetting check to work as a civil servant at the inspectorate.

He was subsequently promoted to executive grade, a management rank, placing him at the heart of the security establishment.

He was only sacked after bosses spotted him on television defending extremist Islamic positions on behalf of his organisation, the Muslim Debate Initiative, which is heavily dependent on Saudi money.

… so basically this guy managed to get through full security vetting, then went on to work inside the security establishment for two years, and was finally rumbled when he was spotted on TV defending extreme Islamic ideology. Apparently he even once spoke at a Cage rally outside the Home Office alongside other high-profile extremists and hate preachers … and nobody noticed.

As you might imagine, many have now been truly inspired and are full of confidence in the entire security vetting process after this revelation.

Actually, I do also know this guy, I remember seeing him appear on the BBCs the Big Questions on 15th March, and well recall how slippery he was, very careful refused to actually answer direct questions, and was a grossly dishonest individual, but don’t take my word on that, you can judge it for yourself.

Below you will find the entire 60 minutes of the Big Questions on 15th March. They addressed 3 questions, 20 minutes each, and so it is the second one, “Do British Muslims have a problem with Apostates?” that is of interest. Jump to 20 mins in to see that, or to get an idea of what Mr Abdullah al Andalusi is really like, you can jump to 24:14 and see what happens when he is asked a direct question – he ducks, weaves, refuses to answer, and that non-answer tells you all you really need to know when it comes to his thinking on putting people to death for simply not believing.

What is rather interesting is that the BBC had worked out that this guy was an extremist and deeply in bed with a few rather dubious individuals, and so were delighted to have him on so that they could put his feet to the fire, so perhaps the security services need to outsource their vetting to the BBC.