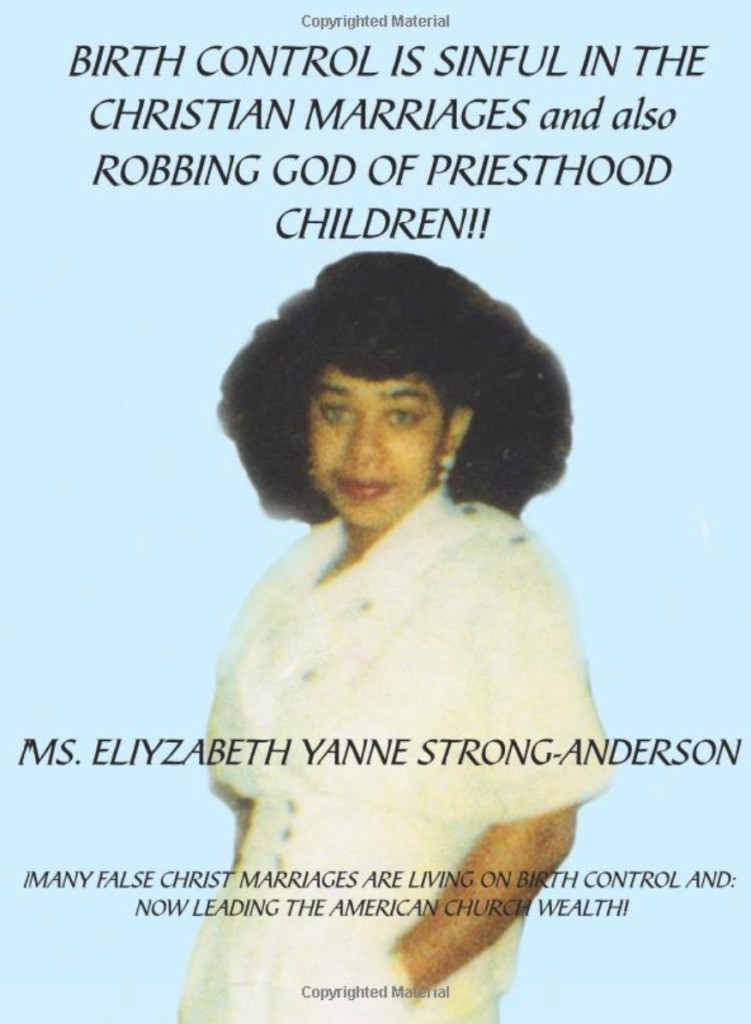 OK, a bit of fun today, and a hat tip to Tim for pointing this one out to me. – a book by Eliyzabeth Yanne Strong-Anderson.

If on the surface you think this book is weird, well you would be right, but it is even weirder than you can possibly imagine, and while the author is of course dead serious, she is also a grade one gold plated delusional Fundamentalist nutter who thinks that she has been especially selected by god to write this gibberish. Her description reads …

THIS IS A HOLYSPIRIT MANUSCRIPT BOOK: WHEN YOU BUY THIS BOOK YOU WILL BE READING A HOLYSPIRIT DIRECTED BOOK FROM GOD; & *CHRIST JESUS. THIS BOOK IS GODS HOLYSPIRIT VOICE: THE CALL FOR ALL CHRISTIANS & CHURCHES TO REPENT FROM ALL THEIR SINS: EVEN FROM FALSE CHRIST TEACHINGS. BIRTH CONTROL SINS HAVE CURSE THE CHURCH WITH SPIRITUAL WHOREDOM & FALSE WORSHIP. RESULTING IN THE PERSECUTIONS: AGAINST THE HOLY PEOPLE. THIS BOOK MAY BE REVISED: BECAUSE OF COMPUTER DICTATORS: MANY WORDS IN THIS BOOK: MADE HAVE BEEN CHANGED: TO>>DISCREDIT: THE AUTHOR. BUT IN TRUTH: I AM A HOLYSPIRIT CHOSEN ANOINTED DISCIPLE FOR GOD & CHRIST JESUS. EVEN FOR JEWS, MUSLIMS & GENTILE SINNERS …

There is lots more, the above is simply to give you an sample, and yes, her caps-lock key is indeed apparently broken and stuck in the on position.

In fact, it is not simply the description, but the entire book from cover to cover, all 648 pages of it, is in uppercase, oh and least I forget, this entire gem of complete and utter lunacy can be all yours for the bargain price of $140 (reduced from $150, so grab it now at discount while you can).

As I’m sure you can imagine, the Amazon reviewers go to town on this one …

By Davie Blossom “D.B.” – My wife and I were actually quite impressed with this item. Between the two of us it took 9 days to finish and I must say I found it hard to get used to during the first few sittings, but gradualy became more comfortable as time went on.

Although neither of us paid too much attention to the content, the sheer volume and quality of the paper contained within was pleasantly suprizing. The paper feels crisp, heavy and tough, yet the pages seperate with just the slightest tug of a thumb and forefinger.

The only real controversy this book created for my wife and I was mostly my fault. You see after I finished the last page I was too lazy to replace the book with another and I left the empty cover sitting on top of the sistern. Let me tell you I copped a nagging!

Overall the item was an interesting change, but we found it a bit expensive and not as suitable as the regular stuff available at the supermarket. Together my wife and I have decided just to stick with normal sorbent two-ply rolls from now on, and would suggest others do the same.

<By Michael Tyznik on March 11, 2009 – THIS BOOK HAS GIVEN ME A NEW LEASE ON LIFE: I NEVER THOUGHT I COULD USE > PUNCTUATION > IN THIS WAY BEFORE: BUT NOW THE HOLYSPIRIT HAS GIVEN ME THE ABILITY TO> CHALLENGE SOCIAL PUNCTUATIONAL NORMS!! PRAISE JESUS!!

By Isabel on June 11, 2014 – Truly a revelation to learn that my vagina is a sperm receptacle, a canal created by God for the sole purpose of serving Him and delivering babies in His name. Seven years of higher education were a total waste of time.

By contrariwise on May 13, 2011 – Masterly written and at less than 50 cents a page, it’s a steal for any Christian couple.

I am eagerly looking forward to her long-awaited sequel: MASTERBATIONS IS A SIN AGAINST GOD BECAUSE IT KILLS MILLIONS OF BABY PREISTS AND DON’T EVEN GET ME STARTED ABOUT WHAT HAPPENS TO THEM DURING A HOMOSEXUAL ENCOUNTER”

The one thing we do clearly learn here is that we live in an age where anybody can now publish anything at all.

OK, I do have to add one additional thought, it might not be real and could simply be an attempt at satire and parody, but the fact that it runs to 648 pages does lead me to suspect that this steam of lunacy may indeed be quite real, and yet it is rather odd that Eliyzabeth can’t spell her own name.

1 thought on “Weird Books: “Birth Control is Sinful in the Christian Marriages and also Robbing God of Priesthood Children!!””