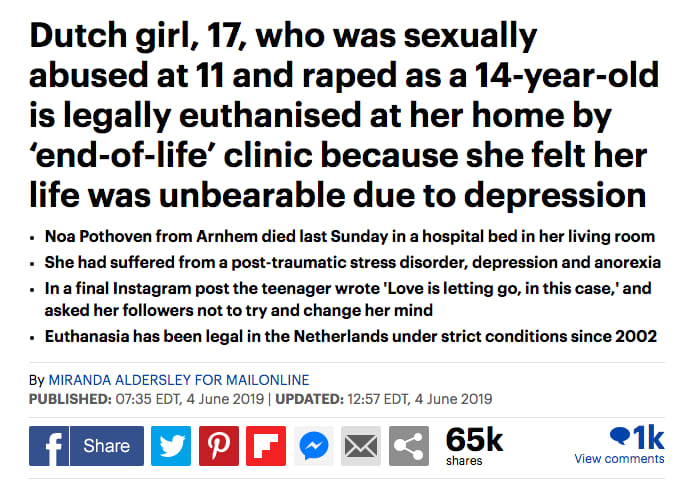 There has been a fake news story circulating recently that causes many to pause and think “WTF”. To be specific this story popped up …

It was reported by many media outlets as fact. All of these outlets ran it … Sun, the Daily Star, the Independent, UNILAD, Sky News, The Times, the Italian press, the Australian News Corp-owned News.com.au, the New York Post, the Daily Beast, NBC-part owned Euronews, and the Washington Post.

Here is the problem, nobody checked, they all simply jumped on the bandwagon and repeated it as if it was fact.

Well at least the BBC did not report it. Oh wait, they did. The BBC’s World Service ran a clip about this “euthanasia”.

Who debunked this fake news?

Politico Europe reporter Naomi O’Leary fact checked, and discovered that what was being widely reported was simply not true at all.

Why did it take off?

It was a tragic story that had been spiced up with a bit of fiction to turn it into clickbait, hence many media outlets picked it up.

Where did it come from?

The original source for this fictitious version was a small British News agency called CEN. You can find them being attributed under many of the original stories.

Did they simply make an honest mistake?

There is a BuzzFeed expose of CEN that dates to 2015 that labels them as the Kings of Bullshit. There Buzzfeed reveals …

The firm’s business model, like that of many other news agencies, is to sell a regular stream of stories and pictures to other media companies, which publish them under the bylines of their own reporters. In CEN’s case, these include a string of stories from relatively remote parts of China, India, Russia, and other non-Western countries. They tend to depict the inhabitants of those countries as barbaric, sex-crazed, or just plain weird. And often they are inaccurate or downright false.

The Chinese woman offering to sleep with men to fund her cross-country road trip? That was CEN. The Russian fisherman who was saved from a bear attack by a Justin Bieber ringtone? CEN. The Macedonian man who chopped his own penis off after his girlfriend told him it wasn’t big enough? Also CEN.

CEN’s “weird news” stories and images appeal to news organisations precisely because they fall into the category of “too good to check”. They also appeal because they are perfectly tailored to the current media ecosystem, in which the holy grail is to have content go viral on Facebook and other social media platforms, delivering a surge of traffic.

One tried and tested method for gaining those viral clicks is running precisely the kind of oddball human interest pieces in which CEN specialises: stories that are so intriguing or horrifying or just plain weird that you can’t help but share them with your friends.

Did CEN respond to the BuzzFeed revelation?

Yes, they did indeed, they took Buzzfeed to court in 2016.

Thus it ceased to be an opinion that CEN were the Kings of Bullshit News. There is now this judgement that turns that into a legal fact.

We now live in a world where many tabloid media outlets are struggling to survive, hence are desperate for clicks so that they can get the ad revenues.

Upon the alter sits a golden calf named “truth”. It has been sacrificed to appease the financial gods of profitability and we in turn now reap the fallout from that. We need to now hone and celebrate our bullshit meters to adjust to this new reality.