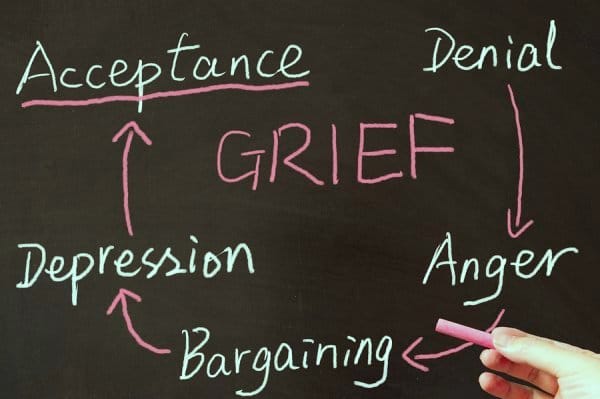 There are several popular myths that have become well and truly embedded within our cultural consciousness, yet when examined a bit more closely, turn out to be a tad dubious. I’ve covered several in past posing, so let’s add to that and take a look at one more popular myth.

Here are a few examples I’ve covered in the past…

To add to the above we will take a brief look at the 5 stages of grief.

These are described as follows …

Perhaps the place to start is to wonder about where this model came from, and to ask ourselves if this is truly a robust well-established model.

This is known as the Kübler-Ross model. In 1969 the Swiss-American psychiatrist, Elisabeth Kübler-Ross, laid it out within her book – On Death and Dying. There is one very important key point here …

While the initial book in 1969 was specifically describing how people coped when faced with a terminal illness, a later book that was published posthumously extended the scope to include almost anything traumatic such as divorce, a job loss, the end of a relationship, etc…

What does Science tell us?

There is a 2017 paper titled “Cautioning Health-Care Professionals: Bereaved Persons Are Misguided Through the Stages of Grief“. It is highly critical of these supposed stages …

Science and practice seem deeply stuck in the so-called stage theory of grief. Health-care professionals continue to “prescribe” stages. Basically, this perspective endorses the idea that bereaved people go through a set pattern of specific reactions over time following the death of a loved one. It has frequently been interpreted prescriptively, as a progression that bereaved persons must follow in order to adapt to loss.

It has remained hugely influential among researchers as well as practitioners across recent decades, but there has also been forceful opposition. Major concerns include the absence of sound empirical evidence, conceptual clarity, or explanatory potential. It lacks practical utility for the design or allocation of treatment services, and it does not help identification of those at risk or with complications in the grieving process. Most disturbingly, the expectation that bereaved persons will, even should, go through stages of grieving can be harmful to those who do not. Following such lines of reasoning, we argue that stage theory should be discarded by all concerned (including bereaved persons themselves); at best, it should be relegated to the realms of history. There are alternative models that better represent grieving processes.

In essence, the idea that there are 5 distinct stages that we progress through in a linear fashion is utter nonsense.

When Kübler-Ross wrote her book in 1969 she was describing how some people coped with illness and dying. She later came to regret writing it in the way she did and also rejected the idea that such stages were linear and predictable.

Her co-author of their 2014 book explains it as follows …

The stages have evolved since their introduction and have been very misunderstood over the past four decades. They were never meant to help tuck messy emotions into neat packages. They are responses to loss that many people have, but there is not a typical response to loss as there is no typical loss.

The five stages, denial, anger, bargaining, depression and acceptance are a part of the framework that makes up our learning to live with the one we lost. They are tools to help us frame and identify what we may be feeling. But they are not stops on some linear timeline in grief. Not everyone goes through all of them or in a prescribed order.

That last part of the rather key point.

Myth: There are 5 distinct stages of grief and we progress through them in a natural linear fashion

Reality: It is complicated. There is no right or wrong way to handle grief. We all react and cope in different and distinctly diverse ways.

The book described what she observed, but it was never meant to dictate that there was a specific universal set pattern that needed to be followed. It is time to let go of that myth.

“no study has ever established that stages of grief actually exist, and what are defined as such can’t be called stages. Grief is the normal and natural emotional response to loss…. No matter how much people want to create simple, bullet-point guidelines for the human emotions of grief, there are no stages of grief that fit any two people or relationships.”

David B. Feldman, Ph.D. professor in the department of counselling psychology at Santa Clara University….

It’s important not to criticize ourselves if our grief doesn’t act like most people’s.

Grief isn’t a race to the finish line, and it isn’t a contest to see who fits Kubler-Ross’s stages best. It’s a natural, though emotionally difficult, part of life, and one that can’t be easily explained by five simple stages.

Robert A. Neimeyer concluded in his scholarly book Meaning Reconstruction and the Experience of Loss (American Psychological Association, 2001): …

“At the most obvious level, scientific studies have failed to support any discernible sequence of emotional phases of adaptation to loss or to identify any clear end point to grieving that would designate a state of ‘recovery.’”