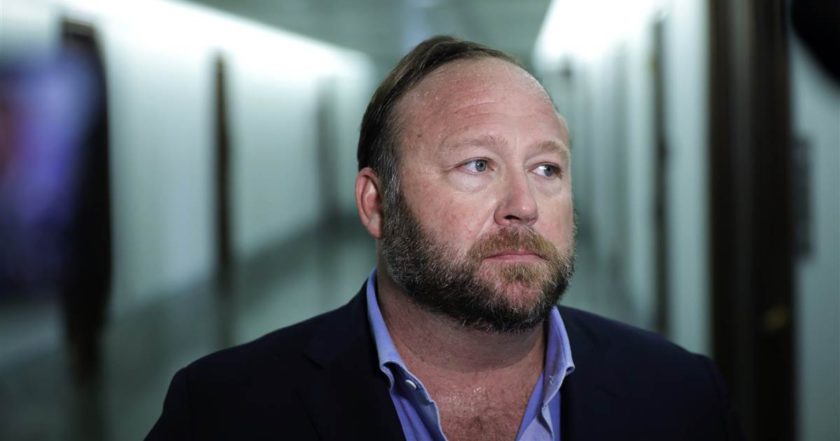 For Alex Jones it could never really be a normal trial. Getting here has been a road paved with lunacy, and so it should perhaps be no surprise to see yet more pop up.

First A bit Of Background

In 2012 the utterly tragic Sandy Hook school shooting happened – 20-year-old Adam Lanza shot and killed 26 people, including 20 children between six and seven years old. Where Alex Jones comes into the picture is that he used his Info Wars platform to promote the claim that it was a false flag operation and that nobody actually died. If you think he is on to something, then you are incredibly gullible and stupid.

As you might imagine, this is extremely distressing to the parents of the kids who died … and yet it gets even worse. Some of the people who believed Jones started harassing and threatening the parents. For example a woman named Lucy Richards was sentenced to five months in prison for sending threats to Pozner and De La Rosa, accusing them of participating in a hoax and threatening their lives for it. With stuff like this happening, and a completely unrepentant Jones still pushing his claims, action was needed.

In March 2018, six families of victims of the Sandy Hook Elementary School shooting as well as an FBI agent who responded to the attack filed a defamation lawsuit against Jones for his role in spreading conspiracy theories that had caused survivors to be harassed, stalked and threatened.

Lawyers for relatives of some victims of the Sandy Hook elementary school shooting allege that the far-right conspiracy theorist Alex Jones sent them documents relating to the court battle they are fighting that included electronic files containing images of child sexual abuse, as the latest twist in the defamation case against the Infowars website host.

Jones denied the allegations during his web show last Friday and accused one of the lawyers involved of framing him.

Lawyers say the imagery was among documents they had requested from Jones as part of the discovery process of the lawsuit.

A Connecticut judge has imposed sanctions on conspiracy theorist Alex Jones for an outburst on his web show against a lawyer for relatives of victims of the Sandy Hook School shooting.

Judge Barbara Bellis on Tuesday ordered the Infowars host to pay some of the relatives’ legal fees and prohibited him from filing motions to dismiss their defamation lawsuit against him. It wasn’t immediately clear how much those legal fees will be.

Item 3 – A related Defamation Lawsuit has been won

Picking up the theme of fighting back, there was also a defamation lawsuit against the authors of the book “Nobody Died at Sandy Hook”, James Fetzer and Mike Palacek. This is what happened …

The father of a victim of the Sandy Hook Elementary School massacre has won a defamation lawsuit against the authors of a book that claimed the shooting never happened — the latest victory for victims’ relatives who have been taking a more aggressive stance against conspiracy theorists.

The book, “Nobody Died at Sandy Hook,” has also been pulled to settle claims against its publisher filed by Lenny Pozner, whose 6-year-old son Noah was killed in the shooting.

“My face-to-face interactions with Mr. Pozner have led me to believe that Mr. Pozner is telling the truth about the death of his son,” Dave Gahary, the principal officer at publisher Moon Rock Books, said Monday. “I extend my most heartfelt and sincere apology to the Pozner family.”

A judge in Wisconsin on Monday issued a summary judgment against authors James Fetzer and Mike Palacek.

There are in fact about nine separate cases filed against various prominent Sandy Hook deniers.

You might still seriously wonder why the parents do not move on, so for one more time let me spell it out for you with this extract …

Robbie Parker, whose 6-year-old daughter Emilie was among 20 first-graders and six educators killed at Sandy Hook, spent years ignoring people who called him a crisis actor. His family moved to the West Coast, but still the harassment didn’t stop. He would get letters from people who found his address. He was once stopped in a parking garage by a man who berated him and said the shooting never happened.

“You are taught when you are young that you ignore bullies and eventually they will leave you alone,” Parker said. “But as time went on, and my other girls were getting older, I realized they weren’t stopping and some of this was getting worse and getting more personal.”

Parker is now part of a lawsuit against Jones, has testified before Congress and pushed for changes on social media platforms, such as YouTube, which announced this month it will prohibit videos that deny the Sandy Hook shooting and other “well-documented events.”

If that was you, would you move on or would you fight back against the ongoing lunacy?

Mr. Pozner who is the lead plaintiff in this case and also a parent of one of the Sandy Hook children is quoted as follows …

Like you, I am totally with the parents on this and I am delighted to see things progressing like this.

The peddlers of misinformation are starting to reap the consequences. In an age of “alternative facts” I personally find this to be very good news.