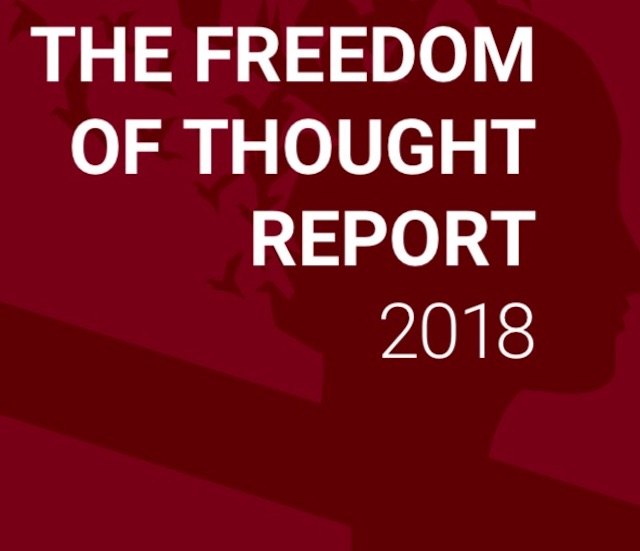 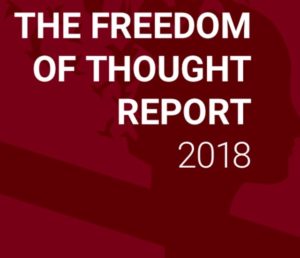 Each year the IHEU (International Humanist and Ethical Union) publishes a very comprehensive report that contains a worldwide survey of discrimination and persecution against humanists, atheists and the non-religious. In other words, it points the finger at nations that deem not believing ancient myths and fantasies to be a crime.

It is quite frankly shocking that in 2018 this is still a thing.

The full report (available both online, and also downloadable as a PDF), is about 115 pages, so pointing out the highlights is perhaps the best way to give you a sense of the sorry saga of human intolerance that it paints across of canvas.

The Very Worst Nations – the Bottom 10

The following are the very worst nations with the absolute worst at the bottom. The link for each country will take you to the precise details for that nation.

The ten worst-performing countries are:

I’m shocked I tell you, shocked, to see which nation is the absolute worst for human rights. Oh wait, no I’m not.

For some of these nations, it is not getting better, but instead is actually getting worst. Take Saudi Arabia as an example. There is the illusion of progress that is instilled via permission now being granted to women to drive, but Saudi Arabia also introduced a law that classified atheism as a crime akin to terrorism.

The degradation of basic human rights is a pattern …

Sudan has prosecuted numerous apostates. Pakistan saw in 2017 an anti-‘blasphemy’ crackdown against atheists and supposed ‘blasphemers’ on social media, as well as continued mob ‘blasphemy’ violence. Mauritania has this year increased the penalty for ‘apostasy’ and ‘blasphemy’ to death and removed the right of “repentance”.

The government of Brunei planned to implement an even more strict Islamic penal code; the plan was due to take place in stages culminating in the introduction of some of the most severe Sharia penalties including death for some infractions of Islamic norms. However, the plan stalled early in 2018, after the international community – and trading partners – expressed their grave concerns. As noted in last year’s report, anti-atheist rhetoric from senior officials in Malaysia (not to mention Muslim-Malay nationalism) caused serious alarm, but that government has now been replaced by a new leadership. In Maldives, too, a government which had overseen an increasing role for conservative Islam in the legal system, and under which various secular and human rights activists have been ‘disappeared’ or murdered, has been routed in elections. It can take more than setbacks and changes in government to reverse long term trends, but it’s worth noting and encouraging hopeful possibilities where they exist, slim as they may be.

What About North Korea?

Why is North Korea not the worst and at the bottom?

North Korea (where the state is almost entirely identical with a propaganda machine designed to uphold a repressive cult of personality) is also rated very badly in our report. But our remit, and the major focus of our ratings, is on discrimination specifically against the non-religious, including restrictions on secularism and religious privilege. This is why a country like North Korea, which fundamentally violates human rights, human dignity and human autonomy on a colossal scale, may be rated badly (currently at 173 out of 196) but not at the very top, where countries which specifically discriminate against or persecute the non-religious pull ahead.

The preverbal Elephant in the room

Rather obviously the bottom 10 nation states all have something in common. It is not politically correct nor wise these days to use a generic term. Deploying that generic term feeds into rather a lot of right-wing xenophobia and stokes up actual discrimination against that religious demographic, so it is important to get this right.

The common theme is not a specific religious belief, but instead is the existence of a religiously derived legal framework. There are states where the majority of the population are Muslim (for example Burkina Faso and Senegal) yet they rank quite well.

Fundamentalist belief, of almost every variation of belief, will deem all other variations of belief to be wrong. The natural outcome of basing your legal framework upon religious rules will be intolerance, hostility, and rampant discrimination.

In Saudi Arabia the prevailing system is a very extreme form of Islam that is commonly known as Wahhabism. The vast majority of Muslims, and that includes that majority of the population in Saudi Arabia itself, deem them to be fanatical heretics and wrong. Wahhabism thrives and dominates because they tightly hold power and force their strict interpretation through a legal framework.

Let’s not finish on a dire depressing note, but instead flip the coin over.

Why do these nations make it to the top of the list?

Belgium and the Netherlands have both taken a pluralist approach to secularism, with the state adopting a neutral attitude toward religion or belief, and have done so against a backdrop of historically high levels of Christian belief. The pluralist systems now in place do not mean there is no religion in public life, and the overall high rating does not mean that there are no conservative religious forces and other social issues, but it does mean that the non-religious do not face any documented systematic discrimination, and there is protection or legal recourse for any incidents of discrimination

What about all those fanatical conservative right-wing nuts?

The United States is famously a land with an entrenched culture war, and a very active “Christian right”. Yet it is also famous for extremely strong constitutional protections, valued by the judiciary and the people, not least pertaining to freedom of religion and freedom of expression. There will (as anywhere) be individuals who will suffer for ‘coming out’ as non-religious in a conservative religious family, for example, and the sense of social pressure to conform to religious norms in some states or communities may be very strong. However, such individuals have legal recourse, social options, and a great tradition of liberty to support them; benefits which are absent in so many other countries with a prevalence of high-control religious presumption.

The UK is way way down the list at number 133, and for some who falsely perceive the UK to be the pinnacle of civilisation, this might be a bit of a shock.

There is a reason for this low ranking. There are many many issues, for example no recognition of Humanist Marriages in England, Blasphemy Laws in Scotland and Northern Ireland, Religious clerics in the House of Lords, religious schools that discriminate against the non-religious.

Then there is also this …

A report for the UN High Commission for Refugees (UNHCR) in 2015 comparing press coverage on the migration crisis in Europe, found that “coverage in the United Kingdom was the most negative, and the most polarised. Amongst those countries surveyed, Britain’s right-wing media was uniquely [aggressive] in its campaigns against refugees and migrants.”

That propaganda which has been fundamentally false has opened up a huge social divide that threatens the viability of the UK.

You can read about it all here.