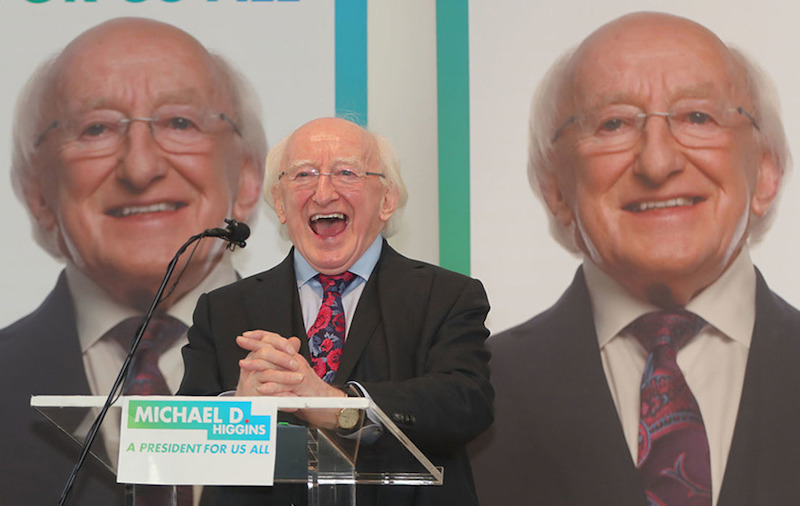 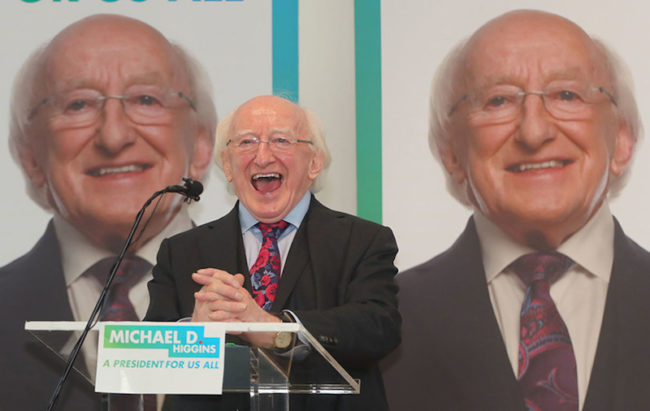 The news from Ireland last weekend is not just good, it is excellent. Nestled amongst the details are two truly outstanding results. One is the presidential election, and the other concerns blasphemy.

He won with a clear decisive 56%. The obnoxious prick Peter Casey (sorry did I portray a slight bias there) came in second with 23.1%. It is perhaps disappointing that 23.1% of the population are that stupid. None of the other candidates got more than 10%.

Who is Michael D Higgins?

You can read about him here on his Wikipedia page. Beyond being just a politician, he is also, in an ever so Irish manner, a poet, sociologist, and broadcaster. More importantly, his stance is one that is all about justice, social equality, social inclusion, anti-sectarianism, anti-racism and reconciliation.

Perhaps one way to sum him up is this now rather famous clip from 2012. This was an exchange between him (as President of Ireland at the time) and US Tea-Party-loving radio guy Michael Graham on Irish radio. He basically chewed this guy’s ass off and handed it to him on a platter. The precise turn of phrase deployed by Mr Higgins for Mr Graham was to tell him to his face that he was “A Wanker Whipping Up Fear” …

Straight talking like that ladies and gentlemen best explains why he was reelected by a landslide.

“The publication or utterance of blasphemous, seditious or indecent matter is an offence which shall be punishable in accordance with law”

“The State acknowledges that the homage of public worship is due to Almighty God. It shall hold His Name in reverence, and shall respect and honour religion.”

Number of people prosecuted between 1937 and now – zero.

In 2009 a defamation act was introduced to deal with this.

The problem was that they could not simply remove an archaic law because it was part of the Irish constitution and the only way to change that was to hold a public vote. That 2009 act itself was a classical Irish solution. It framed the offence in a way to render it utterly unworkable, and that was a very deliberate decision.

“We implemented the crime but made it in a way that it would be virtually impossible to prosecute.”

In reality Blasphemy was so obscure and redundant that most people were unaware that it was even a crime until 2017.

In May 2017, as part of a broadcast on RTE, comedian Stephen Fry was being interviewed. At one point he was asked for his thoughts on God, and this is how he replied …

“Why should I respect a capricious, mean-minded, stupid god who creates a world so full of injustice and pain?” Fry said on broadcaster RTE. “The god that created this universe — if it was created by a god — is quite clearly a maniac, utter maniac. Totally selfish,” Fry said.

A formal complaint of Blasphemy was made.

It concluded as follows. On 8 May 2017, the Garda said they would not proceed with an investigation as no injured parties had come forward and they were ..

“unable to find a substantial number of outraged people”

There is no longer any Blasphemy in the Constitution

Now that the referendum has completed last weekend, the offence of Blasphemy no longer exists as part of the Irish Constitution.

This still leaves the unworkable-by-design 2009 defamation act in place, but since that had been put in place as a temporary measure, it will no doubt be legally obliterated in due course.

Why did it matter?

There exist today nation states such as Pakistan where the “crime” of blasphemy is taken very seriously by religious fanatics. When challenged about this they would point to western states such as Ireland as justification for it, and so it becomes important to obliterate such archaic medieval laws.

This is not just a story about one nation state removing some obscure and utterly pointless law, but is a very progressive step for our species, one that will increase the pressure upon states such as Pakistan to reform as well.

The Irish people have voted to remove blasphemy from the Constitution #BlasphemyRef https://t.co/FF3rdFHvPX

BREAKING NEWS. It's official – blasphemy is no longer a crime in the Republic of Ireland after yesterday's referendum repealed this portion of the Irish Constitution. Congratulations to the visionary and hardworking folks at Atheist Ireland! https://t.co/CmFJzI2UI2

Oh and well done Ireland for ditching the crime of Blasphemy and re-electing Michael D, in the one day.

This Was the Moment When Blasphemy Became Legal in Ireland https://t.co/ske56Gnoor pic.twitter.com/ENE2M96trk