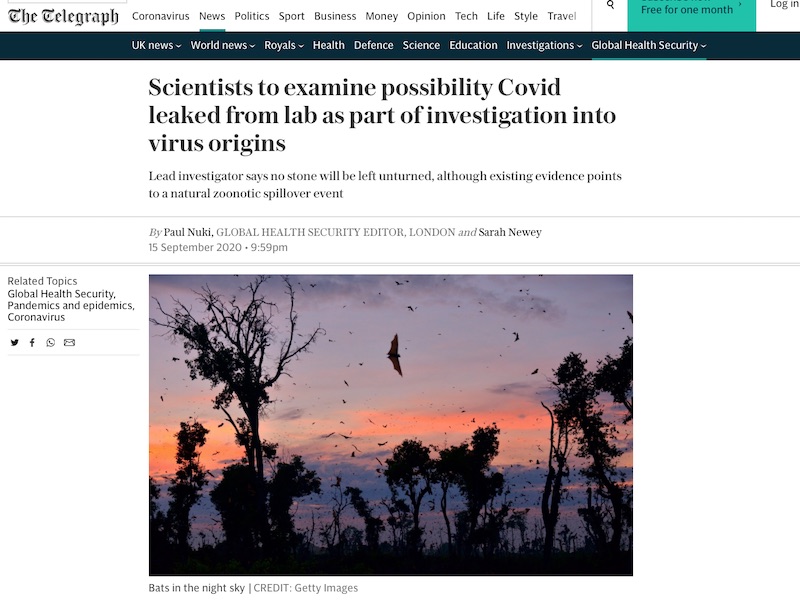 Let me begin by being clear that there is no evidence that Covid leaked from any lab. The claim is however a popular conspiracy theory, hence does merit some attention. What is also true is the the UK’s Telegraph ran the very misleading headline (pictured above) that implies that the idea has some merit.

That’s clickbait, it is not a credible claim.

The real headline, if there were going to be honest, and to be frank, this is the Telegraph so honesty is not their strength, then it should actually be this …

Their opening paragraph under the headline is also grossly misleading. That reads …

An international team of scientists will examine the possibility Sars-Cov-2 leaked from a laboratory as part of a comprehensive investigation into the origins of the virus.

What is really going on?

There is indeed a Lancet COVID-19 Commission. That was established the help speed up global, equitable, and lasting solutions to the pandemic a few months ago.

What has actually happened is that they published a detailed announcement on Sep 14, 2020 ..

The statement makes it clear that they are looking into the origins of COVID-19.

The Telegraph article rotates around the appointment of Dr Peter Daszak to lead a body that will look into the origins of Covid. It is appropriate to understand that his area of expertise is zoonosis (this is where an infectious disease caused by a pathogen (an infectious agent) has jumped from a non-human animal to a human.

Given that he has been appointed, his expertise clearly highlights what the subject matter experts really think.

The Telegraph article does quote him as follows …

Dr Daszak said yesterday he and his team would “systematically examine every theory”…He accepted conspiracy theorists would not welcome his appointment but said, as a scientist, he would “not be bound by preconceived ideas” and would investigate all avenues forensically and “with an open mind”.

He warned, however, it was not possible to “prove a negative” and said it was unlikely it would ever be possible to say with “absolute certainty” how the virus emerged.

“But what we can do is look at every possible theory on the origins of COVID-19 and say, ‘what is the evidence for that?’ And then we put all of those theories together and say, ‘where is the preponderance of evidence?’

“Is it for the virus coming from nature and spilling over into people and emerging that way? Or is it for some form of human involvement that involves a lab or biotechnology? Let’s see where the evidence lies”.

He is not pandering to conspiracy thinking, but instead is being open to where the data leads him.

The evidence we have so far points very strongly towards it being natural. I wrote about the study into this last March.

…the evidence to date supports the view that SARS-CoV-2 is a naturally occurring virus rather than the result of laboratory creation and release.8

Their reference is to the exact same paper that I wrote about last March.

What exactly is the remit for this body?

It is extremely important that the research into the origins of SARS-CoV-2 should proceed expeditiously, and in a scientific and objective way that is unhindered by geopolitical agendas and misinformation. The origins of the virus must be understood, both to help end the current pandemic and to prevent the next one.9 Baseless and uninformed allegations and conspiracy theories that are unbacked by evidence are detrimental to this cause.

It is not just fringe conspiracy theorists promoting claims that have no evidence, there is also interference by US politicians.

Professor Jeffrey Sachs, the chair of the commission makes this very clear …

“What we have learned, I think, about the public health response [to date] is that even though this is a devilish virus it is controllable”

“Around two billion people live in countries that have substantially suppressed the virus. They’ve been able to do that, primarily because of public health means, and especially these non-pharmaceutical interventions [social distancing]”.

“But if we look at the UK, the US, and western Europe, we failed to put such policies in place basically until now. In the US we still don’t have an effective control system.

“We have a lot of emphasis on hospitals, but far far less on public health”.

Prof Sachs said he hoped and expected the Lancet Commission would be conducted on an objective basis and would be free of political bias.

“There has been a lot of rumour-mongering and statements that are way out of line, that are part of a political agenda by some people, senators in the US and others that have really gone far beyond what we know,”

The key point, the real reason for the very existence of the commission is this …

“The origins of the virus must be understood, both to help end the current pandemic and to prevent the next one.”