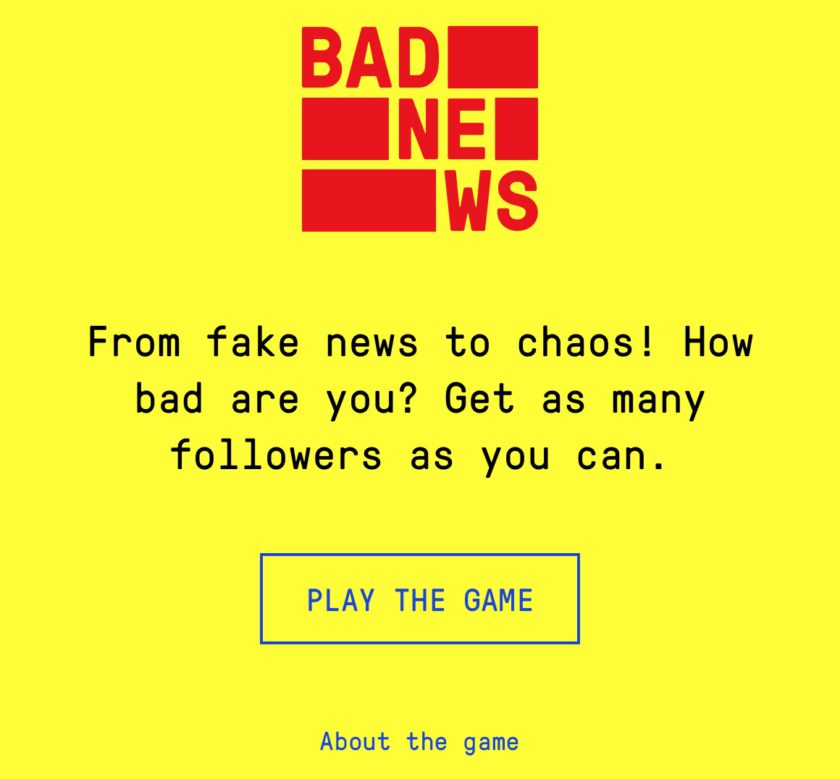 There is an online game that you can play called “Bad News”. This however is not just any game, it has been specifically designed to psychologically train and inoculate those that play against Fake News and disinformation.

How can this possibly work?

The thinking behind this is research into what is known to some as “inoculation psychology“. The idea here is to expose people to harmless fake news, get them to understand the consequences of that, and by doing so in effect arm people with an understanding of the techniques and ways that misinformation is spread.

The group that set this up describe themselves as follows…

We are a multidisciplinary team of academics, journalists and media-experts. We conduct research, give talks, offer workshops and educational programmes and create innovative tools that help you build resistance to disinformation.

Our team is from all over Europe – but our headquarters are in The Hague.

You can read more about them here.

There they describe the game as follows …

In the social impact game Bad News you take on the role of a propagandist. Enter the shadowy world of online deceit and rise to power. Build your army of online trolls and spread conspiracies to influence the public debate and contemplate the dangerous implications disinformation can have on your daily life and society as a whole.

In collaboration with the University of Cambridge we have developed this innovative vaccine to show you how various tactics and methods are used to spread deceitful messages. We believe the best way to cultivate a sixth sense to recognise and expose disinformation is to create it yourself.

How do I play and inoculate myself against Fake News?

You can jump in and give it a go via this website link.

There you are presented with a rolling dialog in white box. To move forward, you click one of the proposed responses of blue text (see below). The AI then responds to your selection, and so as you proceed, you make choices. The consequences of your choices are measured by the number of virtual followers that you gain within the left-hand panel.

By playing you learn from the experience and so you are exposed to the techniques of successful disinformation and how it works.

Does it work, do you actually increase you immunity to Fake News?

Longer evidence-based answer: A new study has been published in Nature on 25th June 2019 by some of the Cambridge University academics behind this game. It confirms that it really does work.

Titled “Fake news game confers psychological resistance against online misinformation“, they lay out the details of their study as follows …

The spread of online misinformation poses serious challenges to societies worldwide. In a novel attempt to address this issue, we designed a psychological intervention in the form of an online browser game. In the game, players take on the role of a fake news producer and learn to master six documented techniques commonly used in the production of misinformation: polarisation, invoking emotions, spreading conspiracy theories, trolling people online, deflecting blame, and impersonating fake accounts.

The game draws on an inoculation metaphor, where preemptively exposing, warning, and familiarising people with the strategies used in the production of fake news helps confer cognitive immunity when exposed to real misinformation.

We conducted a large-scale evaluation of the game with N = 15,000 participants in a pre-post gameplay design. We provide initial evidence that people’s ability to spot and resist misinformation improves after gameplay, irrespective of education, age, political ideology, and cognitive style.

Their goal is this …

…by designing and testing a novel experiential learning platform, we hope to have paved a path toward a new line of behavioural science research aimed at empowering diverse populations to guard themselves against the spread of misinformation in society….

In summary, the game itself is fun, and has gone viral for that reason alone. However, the true benefit of playing is that it is an effective tool to combat fake news via inoculation theory and will help you to celebrate your bullshit detector. This is a fabulous idea.

Tweets about the Bad News Game