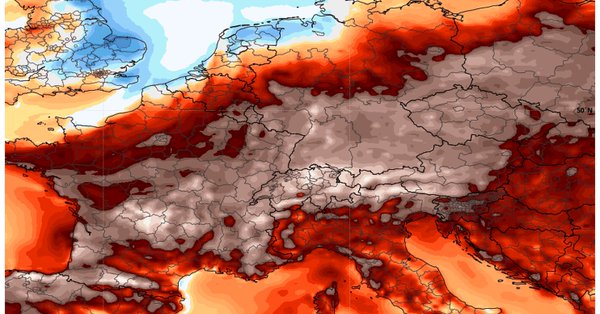 Once again the ominous phrase “record breaking” pops up. The forecast is that the heatwave will see temperatures of up to 45c in France. “But it is summer” you might quip, “what exactly did you expect”. Er no, it is not August, we are still in June. Here is how the UK’s Guardian explains the anticipated heatwave …

European cities are taking exceptional steps to limit the impact of a historic early summer heatwave as temperatures across the continent approached monthly and, in some places, all-time records.

Authorities have warned that temperatures could pass 40C and reach 45C in parts of the continent by Saturday as a plume of hot air moves north from the Sahara, sucked northwards by a stalled storm over the Atlantic and high pressure in central Europe.

In Germany, where the 38.6C recorded on Wednesday in Coschen, near the Polish border, exceeded the country’s previous June high, officials imposed a 120km/h speed limit on stretches of the Saxony-Anhalt autobahn as the road surface began to deteriorate, while rail tracks buckled near Rostock on the Baltic Sea….

…Schools in parts of France, meanwhile – where an all-time heat record of 44.1C could be beaten on Friday – were expected to remain closed until the end of the week, while authorities in Paris, Lyon, Strasbourg and Marseille banned older cars from entering their city centres to combat pollution….

…With temperatures in Milan forecast to hit 40C, charities were preparing to distribute 10,000 bottles of free water to the homeless and other people in need, while 33 of Spain’s 50 provinces will be facing record-breaking temperatures, which could reach 44C.

Innsbruck’s famous “fiaker” carriage horses were taken off the streets as the city recorded 36.7C, breaking the 2012 record for Tyrol state of 36.6C…

While some will be greatly impacted, other have adapted …

In Brandenburg, police said they were “speechless” as a man was stopped riding his moped naked, and after guards caused uproar in Munich by ordering a group of women to put their bikini tops back on, the city council was set to debate a bye-law change to allow topless bathing.

Pictures of that or it didn’t happen?

Is this really record breaking?

We often tend to forget what happened during previous years, human memory is flawed like that, so we do need to ask ourselves if the official records really do confirm that summer is getting warmer and that it is not simply media hype.

Stefan, who tweeted the above, works for the Potsdam Institute for Climate Impact Research. They have issued an official statement regarding the heatwave …

24/06/2019 – Germany likely faces a heat wave this week. In which way is this releated to human-caused climate change?

“Weather data show that heat waves and other weather extremes are on the rise in recent decades. The hottest summers in Europe since the year 1500 AD all occurred since the last turn of the century: 2018, 2010, 2003, 2016, 2002. Monthly heat records all over the globe occur five times as often today as they would in a stable climate. This increase in heat extremes is just as predicted by climate science as a consequence of global warming caused by the increasing greenhouse gases from burning coal, oil and gas.”

“On top of this worrying trend, the atmospheric circulation is also changing. Data analysis shows that the normally eastward travelling summer circulation of the Northern Hemisphere mid-latitudes has slowed down, including the jet stream. This favors the build-up of hot and dry conditions over the continent, sometimes turning a few sunny days into dangerous heat waves. We melt sea ice in the Arctic which contributes to the disproportionally strong warming in the northernmost regions of our planet, which in turn can disturb the natural jet stream patterns. A strong atmospheric planetary wave with wave number 7 has likely played an important part in the current heat extreme. This was shown to be the case in the extreme weather events of last summer as well.”

“While in Europe we worry about reaching 40 °Celsius this week, India has seen temperature records above 50° Celsius recently. Heat waves can heavily impact societies by leading to additional deaths in vulnerable groups such as old people and children, and the combination of hot and dry conditions can lead to water shortages and harvest failures. Only rapidly reducing fossil fuel use and hence CO2 emissions can prevent a disastrous further increase of weather extremes linked to global heating.”

The BBC reached out to some subject matter experts for their thoughts and opinions. This is what they also reported …

…A scientific study into last year’s Europe-wide heatwave by the World Weather Attribution group concluded that high temperatures in the region were made more likely by human activities that contributed to climate change….

Beyond the, “gosh, it is going to be hot” hype that most (including me) feel obliged to top and tale their articles with, there is also the following deeper insight from a Washington Post article …

The broader weather regime behind this heat wave has connections to the stagnant high-pressure zone responsible for the big Greenland melt event in mid-June. Both the Greenland melt and this heat wave are connected to a “blocking pattern” composed of big and lumbering high-pressure zones in the northern latitudes that can become stuck in place and lead to extreme weather. Such patterns may be becoming more common in a warming world.