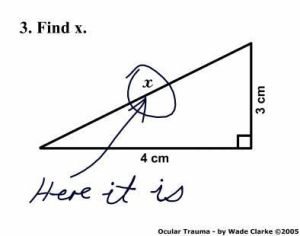 The quick short answer is “no”, being religious does not make you stupid .. OK, were are done.

Well yes, I did want to write a bit more.

Barbara Drescher, a cognitive psychologist and blogger, has posted a really good article to the new skeptical blogging platform whose writers focus on scientific skepticism (yea) all about this very topic. There she explains that highly intelligent people can also at the same time be completely irrational.

I learned a few interesting things, specifically that Mensa appears to be a club for people with both high IQs and also some truly daft irrational beliefs. If you want to join then you have to pass their supervised IQ test to prove that you are in the top 2%, and so you would assume that this crème de la crème of humanity would also be the most rational because they are the most intelligent, but apparently they are not …

I thought that this was enough to guarantee some interesting people. I expected that, being around these people, I’d probably feel stupid and intimidated, but that was okay. The trade-off was worth it.

Imagine my excitement when this envelope came in the mail and I poured over the welcome packet filled with events and special interest groups (called “SIG” for short) to join. “Scrabble by Mail”… okay, that’s cool, but if all I wanted was a challenging game, I could stay home and let my mother kick my ass at Scrabble™. “Writer’s SIG”. That’s more like it. Star Trek SIG? Hell, yeah.

I checked, and on their official list of Special Interest Groups I found these …

But wait, it gets even worse …

Then I read the Mensa Bulletin. One featured story informed me that science “does not have a consensus” regarding the man-made nature of global warming and that AGW is a product of “McCarthyism”. This was 2008, after the IPCC consensus statement which firmly declared a scientific consensus on the existence and man-made nature of climate change. The author had some harsh and rather ironic criticism of the act of making claims without evidence, but her own arguments were clearly fallacious and irrational, and I did not think this simply because I disagreed with her conclusion.

Since then she permitted her membership to lapse.

OK, so what is Mensa really all about?

They were founded over 65 years ago “to identify and to foster human intelligence for the benefit of humanity“, and to be frank so far they have managed to achieve diddly squat of that mission statement, and it has instead ended up being a social club.

So what is going on here is that intelligence and rationality are not the same thing. If you simply tick the “intelligence” box and fail to tick the “rationality” one as well then you don’t make the kinds of choices that solve real problems, and that is why they have ended up getting nothing of any practical value done.

There are many, many fascinating ways that human beings are predictably irrational, and many readers of this blog are familiar with a lot of them. We tend to think that more is always better. We fail miserably at understanding probabilities and assessing risks. We look for evidence for what we believe rather than believe what the evidence tells us is probably true. People we like are always innocent, always good, and always right. We buy lottery tickets, play roulette, and buy extended warranties. We’re afraid to fly, but we drive drunk. Because we actually drive better when we’re drunk, right?

And yet we’re capable of overriding those natural tendencies.  Our brains are not broken. They just have a default setting. But intelligence is not enough to override the defaults.

Now that nails it.

As humans we do tend to look for evidence to confirm what we already believe instead of believing what the evidence actually tells us, and so some truly irrational beliefs can and do  take root and flourish – there are beliefs in aliens, gods, ghosts, astrology, esp, lake monsters, and psychics that thrive today despite the complete lack of evidence and regardless of our degree of intelligence.

The truth is, the smarter somebody is, the better they are at rationalising utterly absurd ideas.

A bat and ball cost a dollar and ten cents. If the bat costs a dollar more than the ball, how much does the ball cost?

[First work it out, then read on]

We may indeed be smart, but as humans we all also have a natural tendency to not be rational. The reason so many get the above ball and bat question wrong is because of our natural tendency to leap for an answer that requires minimal effort … now that’s the challenge you face.