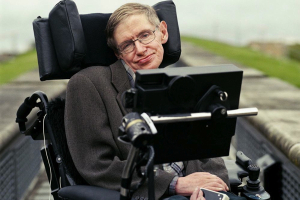 In some earth shattering breaking news various media outlets have been reporting that Stephen Hawking Says  that there Is No God and has confirmed that he is an atheist. It has been reported by outlets such as …

So what is going on here, did he turn up in the bible belt and start saying stuff that frightened the natives?

Nope, not at all.

El Mundo journalist Pablo Jauregui asked Prof Hawking about his religious leanings in the lead-up to this week’s Starmus Festival in the Canary Islands, because he was curious to understand a passage in the famous 1988 book “A Brief History of Time,” in which he wrote that scientists would “know the mind of God” if a unifying set of scientific principles known colloquially as the theory of everything were discovered. In response to that Prof Hawking explained it as follows:-

“Before we understood science, it was natural to believe that God created the universe, but now science offers a more convincing explanation. What I meant by ‘we would know the mind of God’ is we would know everything that God would know if there was a God, but there isn’t. I’m an atheist.”

This was a Jaw-Dropping revelation … right?

So in essence, the news is that a guy who has been openly declaring his non-belief in a god for many decades now once again confirmed that non-belief, and yet for some truly bizarre reason, various factions of the media deemed this to be a newsworthy revelation.

Is belief so entrenched in some minds that the reality of finding some well-known, well-respected, and highly intelligent people who don’t believe a trauma for them? Why is this lack of religious belief actually news, especially in the context of it being a fact that has been in the public domain for many decades?

Now that we fully grasp what the term “news” means for these outlets, I have a couple of additional further items for you, so brace yourself and prepare to be truly shocked, but …

Yes I know, I’ll stop now, because you need a quiet time to recover from learning the above shocking revelations.

1 thought on “Stephen Hawking Says ‘There Is No God,’ Confirms He’s An Atheist”