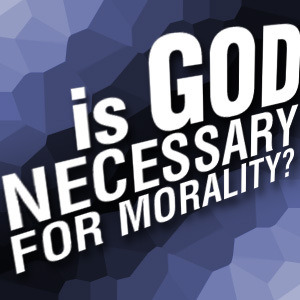 The most common arguments that are often presented to make the claim that you can’t be truly good without a religious belief are as follows:

… oh wait, no I’m not, so let me explain why and outline the flaws in each of the above.

A common modern source for the divine command claim is the book, Mere Christianity, by C.S Lewis, and since it is a popular book the claim often comes up. There Lewis argues that if you don’t embrace a definitive divine moral standard, then any morality you have is relative and very much at the whim of each individual. But is that really true? If, for example, society decided that murder was OK, would that make such a stance true? Quite clearly no, it would still be wrong. It also implies that if non-believers did not make any moral decisions at all about anything, then they would have no morality? Once again this is clearly not true, so morality is obviously not a personal decision. With or without belief, murder causes harm and so it is clearly wrong, not because we personally decide it is, nor because a belief system claims that a god said so, not even because the majority have decided it is, but simply because of the consequence of such an action.

What is also rather interesting about all this is that many do not appreciate that this divine command claim was debunked a very long time ago by Plato. In the dialogue between Socrates and Euthyphro there is a point where Socrates and Euthyphro are discussing the nature of piety and Socrates presents a dilemma as the question:

Let’s now delve into this a bit to make that crystal clear.

If specific things are indeed wrong and God is simply telling you about these facts, then you don’t need a God, because quite clearly with or without a God, the wrong things remain wrong.

What about the alternative option? Well, if specific things are only wrong because a God has decided they are wrong, then that would imply that specific things would be right if God says they are OK, for example slavery or ethnic cleansing? If this was really true, then the morality decreed by a god is also relative and quite arbitrary. This is exactly the accusation that believers charge the non-believers with, so apparently what is true for non-belief is also be just as true for belief as well.

“Ah”, say the believers as they frantically try and salvage something here, “God himself is good”. Oh but wait, who then gets to decide that, because that would be circular thinking, god is good simply because god says he is good.

Morality is what it is with or without a god, and popping a god into the mix changes nothing, nor does it establish the claim that belief has a special moral status.

Commands imply there is a Commander

An alternative line of thought is the claim that because we have moral rules, there must be a rule maker, and yes the thinking here is indeed an ethical variation of the Rev Paley’s infamous watchmaker argument. The claim is that without the rule giver there would be no rules, so you must have a rule giver.

OK, let’s think this through. Just as some point at the universe and declare, “God did it”, so you also  have some who point at morality and declare “God did it”. Neither stance can be justified, there is not one jot of evidence that such claims are true. We also have far better explanations for the quite natural evolution of morality, no deity is required to explain it.

There are of course other flaws with this line of argument as well. For example, what obligation do we have to obey rules given by a god, if such an entity existed, and it barked orders at us, what would make such orders moral? And yes, once again we are back into circular thinking where you use the thing you are seeking to prove as the basis for proving it.

The next argument is that non-believers have no reason to be good. The believers apparently are motivated to be good because if they don’t behave then a god will punish them. A secondary claim associated with this stance is the thought that non-believers remain good simply because they were once believers and while they might have abandoned their belief, they have retained the morality generated by that belief.

To some degree it is a rather frightening thought to suggest that people only behave decently due to fear, and that the moment they cease to believe they will be rushing out to commit crimes. The philosopher Voltaire held this view:

“I want my lawyer, my tailor, my servants, even my wife to believe in God, because it means that I shall be cheated and robbed and cuckolded less often. … If God did not exist, it would be necessary to invent him.”  – Voltaire (1694, 1778)

The primary problem with such a claim is that there is no evidence to support it, people who do not believe still behave decently. In fact, if you ponder the thought, people behaving decently towards their fellow humans out of pure empathy and respect are quite clearly behaving far more morally then individuals who simply behave because they are afraid of being punished if they don’t.

There was a very interesting study at Berkeley in 2012 where social scientists found that compassion consistently drove less religious people to be more generous.

There are a couple of  other very interesting observations to make as well.

Now that last one is a nice segway into the final claim. Belief asserts that it has a definitive book of rules that clearly defines an absolute moral standard that never changes, and that for non-believers, morality is simply an opinion.

The most obvious challenge to this assertion is that it is quite obviously not true because the supposed absolute religious standard is no such thing and has in fact evolved and been very heavily filtered. If you consider all the rules that the bible dictates, you soon find numerous examples of biblical rules that have been abandoned. For example, eating shellfish and also wearing clothes made from wool/linen mixes are apparently abominations (Lev11:10 and Deut 22.11), but nobody today would accept that. The rich are also supposed to give away all their money (Mat 19.21), ethnic cleansing is a direct order from god (1 Samuel 15:2-3), and the entire bible from cover to cover is very pro-slavery, and even contains details guidance on how to beat your slave (apparently it is just fine as long as your slave survives the beating).

Quite clearly believers do not treat the bible as a definitive absolute source for all morality, but instead they filter out the bullshit and just keep the good bits, so their morality is not actually rooted within a text that endorses some highly obnoxious and truly immoral standards, but rather comes from outside it.

Ask yourself this, how exactly did the religious work out that slavery was wrong, because clearly that did not come from the pro-slavery text they embrace.

So how best to wrap all this up? Well, perhaps with the following quote …

“To suggest that one can’t be good without belief in God is not just an opinion, a mere curious musing – it is a prejudice. It may even be discrimination” – Greg Epstein: Good without God.

8 thoughts on “Morality with and without a god.”