You would perhaps expect Saudi Arabia to be facing considerable pressure from the UN Human Rights Council (UNHRC), but apparently not. Let’s first make this abundantly clear …

The Mandate and goal of the UNHRC is that it is …

a United Nations System inter-governmental body whose 47 member states are responsible for promoting and protecting human rights around the world.

OK, that’s clear, so what about Saudi Arabia, they can’t be all that bad if they are not being condemned by the UNHRC, right?

Wrong, Saudi Arabia is a nation where the track record for human rights is utterly appalling in so many different ways and is perhaps the very worst on the planet, to be specific …

OK, is my objection today that they have not been condemned by the UNHRC?

Nope, my objection is that a few days ago Saudi Arabia was selected to chair the UNHRC panel for appointments to be made in the current 30th session of the council.

A UN report dated September 17th reports that Faisal Trad, Saudi Arabia’s envoy to the UNHRC, was selected to chair the panel for appointments to be made in the current 30th session of the council, which opened on Monday and will last for another two weeks. The Saudi ambassador was first elected to the post ahead of the recent June 2015 session, yet Geneva diplomats chose to keep silent and that initial election went unreported until now.

Ensaf Haidar, the wife of jailed Saudi blogger Raif Badawi, has criticized the election of Saudi Arabia as Chairperson of the UN Human Right Council panel, saying the decision is “like a green light to start flogging Raif Badawi again!” 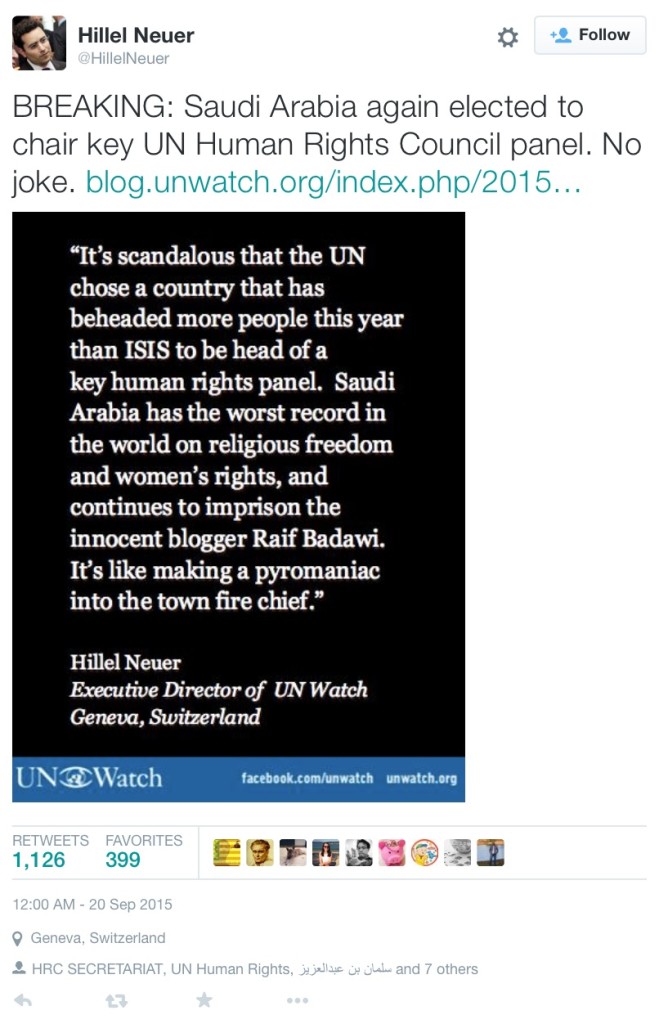 There is of course one obvious question … why?

The an$wer i$ of cour$e obviou$ to all – oil and arms, and so the rather clear message being sent is that oil still trumps human rights.