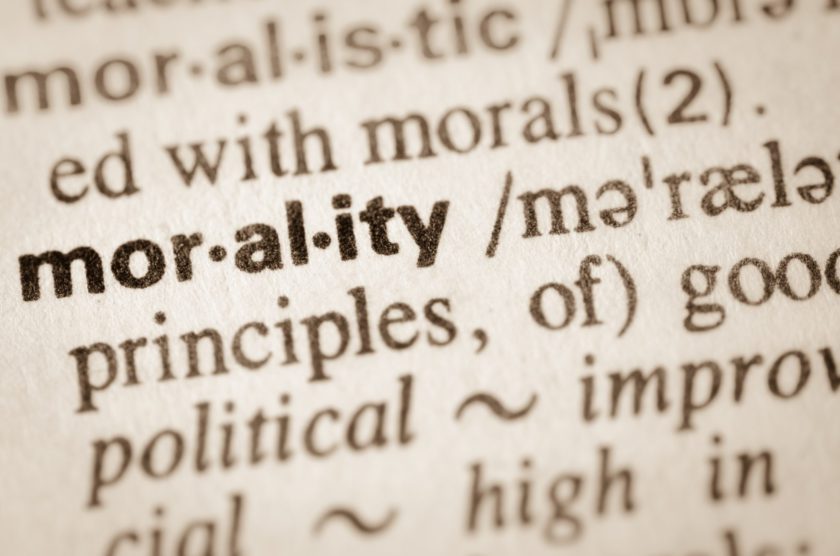 This is an interesting question.

Rather obviously those who are religious will have a very specific answer that just happens to align with their specific beliefs. To be honest, anything other than that from those that believe would be a huge surprise.

If we step beyond a religious boundary, then what is the best possible most honest answer?

Andrew Copson, the President of Humanists UK has a very good answer …

It’s true that all religions are human inventions and so they may have interesting or worthwhile reflections or moral insights frozen into them, but there’s no reason to treat these as any more or less valuable than the insights that come from novels, soap operas, or philosophy. The relevant test is not whether the insight in question comes from religion or not. Personally, I think that most moral insights in religions, because they are the product of very different times from our own, are amongst the least useful sources of moral ideas today.

Here are some other very good observations from different people …

Yes insofar as it underpins the way a lot of religious people see their own morality, they can look to it for guidance & there’s nothing wrong with that, but it’s not necessary to have faith to know right from wrong.

Morality: What do we really mean?

What exactly does the word “Morality” mean?

In a very strict sense it is defined as “principles concerning the distinction between right and wrong or good and bad behaviour“. That then perhaps leads you to wonder what we mean by “good” or “bad”.

Obviously religion often claims a monopoly on determining this, but that is not the case. Religious history clearly demonstrates that they really don’t have a valid claim on any such monopoly.

There is no avoiding the fact that once you wade into this topic then things can become very fuzzy and complicated. Often what appears to be simple and easy is not.

Let me give you a simple example. If asked, “should you always tell the truth and never tell a lie?”, then universally most would agree that lying is bad. This is also generally the religious absolute answer.

What do you then do when faced with questions like these …

OK, let’s really push the boat out and give the classical example. You live in occupied France and you have just hidden your good friend and Jewish neighbour in your house. A Nazi comes knocking on your door and asks if you have seen your neighbour?

Hopefully you get it now and can see that simple binary absolute answers often don’t work in the real world; it gets complicated.

Let’s test this a bit more via one big topic.

For some, a ban on abortion is absolute and in no circumstances should it ever happen because it is murder. If however you are faced with a scenario where the only option is an abortion to save a life, what do you then do?

Those that take the absolute “We don’t do abortions” end up killing people. Some might claim that such cases are never necessary, but they would not be telling you the truth. In 2012 Savita Halappanavar died in a fully equipped hospital in Ireland from septic miscarriage because the law, inspired by religious belief, did not permit the abortion that would have saved her life.

We need empathy, compassion, and reason to work out what is truly best for wellbeing.

Some might counter-argue that we need absolute “divine” objective standards. The problem is that such standards don’t exist, the claim that they do is a myth. There is no religious consensus regarding morality. When presented with a claim for such absolute standards, you are given one of many different interpretations of a text authored by humans who died a very long time ago.

There is no avoiding the fact that we really do need to think things through.

There is of course a great deal more to say on this topic, I’ve only scratched the surface. The goal here is not to lead you to a conclusion, but rather to start you thinking and questioning assumptions.

Side Note: The 10 Commandments

Some may advise that they follow the 10 commandments. If asked, generally they can’t tell you where in the bible they are listed, nor can then tell you what all ten are.

In other words, they might sincerely believe they have a moral foundation that is bible based, but test that and you find that they don’t. What they actually do is relative to whatever group they belong to.