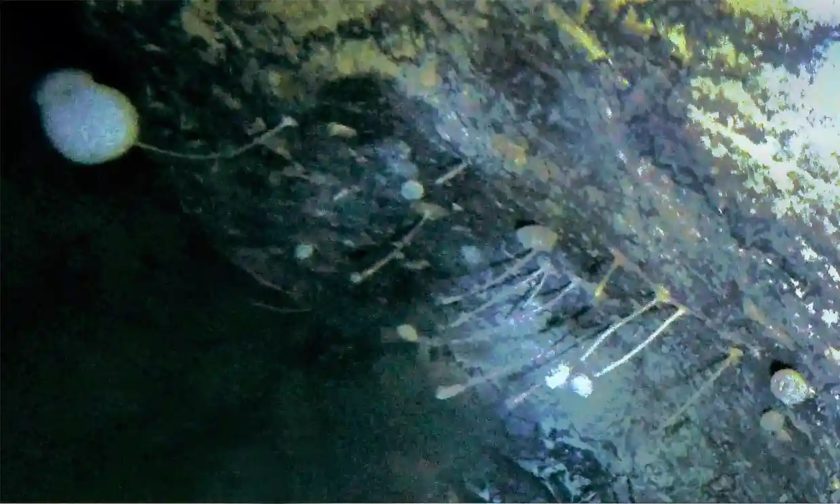 You will no doubt have spotted the news concerning the surprising discovery of life deep under an Antarctic ice shelf. The big news here is that this accidental discovery leads to a complete re-think concerning life under extreme conditions.

They were actually attempting to get a core sample, but the bolder their drill encountered scuppered that. Attached to that bolder was life and that was a huge surprise because this is a very extreme location. Total darkness and a lack of food led them to believe such forms of stationary filter-feeders could not exist there, yet there they are.

It opens up new thinking concerning life in extreme conditions. Once upon a time long long ago, about 720 to 635 million years ago, all of earth was frozen. How did life survive such periods? This perhaps offers us a hint about how life really can adapt to very extreme conditions.

Far underneath the ice shelves of the Antarctic, there’s more life than expected, finds a recent study in the journal Frontiers in Marine Science, published this week (15 February 2021).

During an exploratory survey, researchers drilled through 900 m of ice in the Filchner-Ronne Ice Shelf, situated on the South Eastern Weddell Sea. At a distance of 260 km away from the open ocean, under complete darkness and with temperatures of -2.2 °C, very few animals have ever been observed in these conditions. But this study is the first to discover the existence of stationary animals – like sponges and potentially several previously unknown species – attached to a boulder on the sea floor.

“This discovery is one of those fortunate accidents that pushes ideas in a different direction and shows us that Antarctic marine life is incredibly special and amazingly adapted to a frozen world,”

“Our discovery raises so many more questions than it answers, such as how did they get there? What are they eating? How long have they been there? How common are these boulders covered in life? Are these the same species as we see outside the ice shelf or are they new species? And what would happen to these communities if the ice shelf collapsed?”

Floating ice shelves represent the greatest unexplored habitat in the Southern Ocean. They cover more that 1.5 million km2 of the Antarctic continental shelf, but only a total area of around the size of a tennis court has been studied through eight prior boreholes.

Current theories on what life could survive under ice shelves suggest that all life becomes less abundant as you move further away from open water and sunlight. Past studies have found some small mobile scavengers and predators, such as fish, worms, jellyfish or krill, in these habitats. But filter feeding organisms–which depend on a supply of food from above–were expected to be amongst the first to disappear further under the ice.

So, it came as a surprise when the team of geologists, drilling through the ice to collect sediment samples, hit a rock instead of mud at the bottom of the ocean below. They were even more surprised by the video footage, which showed a large boulder covered in strange creatures.

“We were expecting to retrieve a sediment core from under the ice shelf, so it came as a bit of a surprise when we hit the boulder and saw from the video footage that there were animals living on it.”

Dr James Smith, a geologist at BAS, was part of the drilling team

This is the first ever record of a hard substrate (i.e. a boulder) community deep beneath an ice shelf and it appears to go against all previous theories of what types of life could survive there. Given the water currents in the region, the researchers calculate that this community may be as much as 1500 km upstream from the closest source of photosynthesis. Other organisms are also known to collect nutrients from glacial melts or chemicals from methane seeps, but the researchers won’t know more about these organisms until they have the tools to collect samples of these organisms–a significant challenge in itself.

“To answer our questions we will have to find a way of getting up close with these animals and their environment – and that’s under 900 m of ice, 260 km away from the ships where our labs are,” continues Griffiths.

“This means that as polar scientists we are going to have to find new and innovative ways to study them and answer all the new questions we have.”

Griffiths and the team also note that with climate change and the collapse of these ice shelves, time is running out to study and protect these ecosystems.

The seafloor beneath floating ice shelves accounts roughly a third of the Antarctic’s 5 million km2 of continental shelf.

Prior to this study, our knowledge of these habitats and the life they support was restricted to what has been observed from eight boreholes drilled for geological and glaciological studies. The established theory of sub-ice shelf biogeography is that both functional and taxonomic diversities decrease along a nutrient gradient with distance from the ice shelf front, resulting in a depauperate fauna, dominated by mobile scavengers and predators toward the grounding line. Mobile macro-benthic life and mega-benthic life have been observed as far as 700 km under an ice shelf.

New observations from two boreholes in the Filchner-Ronne Ice Shelf challenge the idea that sessile organisms reduce in prevalence the further under the ice you go. The discovery of an established community consisting of only sessile, probably filter feeding, organisms (sponges and other taxa) on a boulder 260 km from the ice front raises significant questions, especially when the local currents suggest that this community is somewhere between 625 km and 1500 km in the direction of water flow from the nearest region of photosynthesis.

This new evidence requires us to rethink our ideas with regard to the diversity of community types found under ice shelves, the key factors which control their distribution and their vulnerability to environmental change and ice shelf collapse.