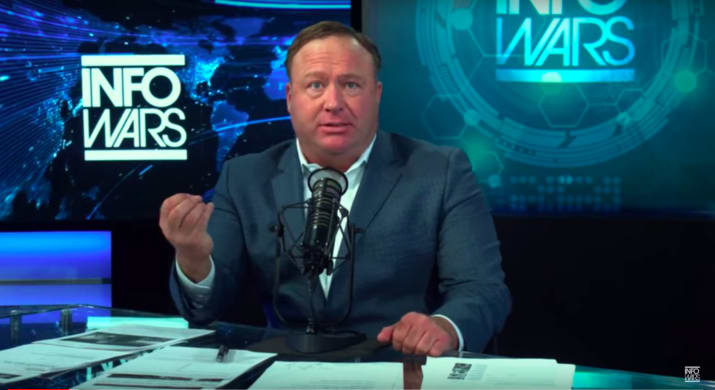 The reality of actions having consequences is fast catching up with Alex Jones. Back last April I was writing about the well-deserved defamation suits that he was being served with. Today there are several updates to bring you up to speed on.

Initial Hearings for the Defamation Suits

As was perhaps anticipated, nobody is rolling over to settle for money. It is not about cash, it never was. It is about people who have had their lives ruined by the promotion of blatantly false and utterly absurd conspiracy claims by Jones. The parents of children murdered in the Sandy Hook elementary school shooting in 2012 are going after him because Jones falsely accuses them of being crises actors and that their murdered children never existed. This has had dire consequences …

last June, a woman named Lucy Richards was sentenced to five months in prison for sending threats to Pozner and De La Rosa, accusing them of participating in a hoax and threatening their lives for it. In that case, the court found that Jones and Infowars so influenced Richards’s thinking on the matter that, according to documents filed by the plaintiffs’ attorney Mark Bankston and obtained by Texas Monthly, the terms of her sentence also include that, after her release, Richards would “be prohibited from viewing Infowars programming.” As a result, Bankston says, “This suit was brought because the Pozner family cannot let Mr. Jones’s malicious lies put their lives at further risk.”

The other case coming up concerns Marcel Fontaine. He was falsely named by Infowars as the Florida Shooter …

“I’ve seen hundreds of violent, hateful messages posted online. I have seen messages from people wishing me dead even after being told of my real identity. And I’ve personally been sent violent and harassing messages which continued even weeks later, including a threat which referenced my place of employment,” he says, adding that “he’s terrified that Infowars fans may come to similar conclusions” that he’s “part of a conspiracy to stage the Florida shooting.”

All of these people have been harassed and traumatised by followers of InfoWars who are stupid enough to actually believe it all.Attorneys representing Mr Jones now face the task of defending the indefensible. So how exactly can they even begin to tackle that? The answer is to apparently argue as follows …

a motion to dismiss the suit filed by Jones’s attorney argues. “No reasonable reader or listener would interpret Mr. Jones’ statements regarding the possibility of a ‘blue-screen’ being used as a verifiably false statement of fact, and even if it is verifiable as false, the entire context in which it was made discloses that the statements are mere opinions ‘masquerading as a fact.’”

In other words, what his lawyers are saying is that he is not making statements of fact, that he is simply pretending, and that it is all just an act, a show designed to entertain . They need to do it in a way that enables them to win the legal argument, and yet at the same time maintain the credibility the Jones needs in order to keep his audience intact. The legal speak “no reasonable reader or listener” shows you the degree of contempt that Jones has for his devoted listeners. From his viewpoint they are stupid gullible marks ready to be milked of cash by drumming up an absurd conspiracy so that he can then leverage that fear to see them overpriced trinkets. He might indeed bang on about water turning frogs gay, but not because he actually believes that. Instead he wants to sell overpriced water filters to his gullible followers. This guy is simply a grifter, a modern day snake oil shark who now faces the real possibility of being tarred and feathered, then run out of town legally.

Many, if not most, do recognise him for what he really is, and so they complain about him using various platforms. The platform providers respond, not because they agree, but because it is their most profitable option.Both YouTube and Facebook put his content on hold for breaching their policies – hate speech and child endangerment. When it was then discovered that he was using Spotify, many of their subscribers started cancelling subscriptions. Spotify listened, and made the decision to also pull the plug on him.In a statement to Bloomberg on Wednesday last week, a spokeswoman for Spotify said the following:

We take reports of hate content seriously and review any podcast episode or song that is flagged by our community. Spotify can confirm it has removed specific episodes of ‘The Alex Jones Show’ podcast for violating our hate content policy.

Apple has now not only joined into this trend, but has taken it to an entirely new level. BuzzFeed reports …

Apple has removed the entire library for five of Infowars’ six podcasts from its iTunes and Podcast apps, BuzzFeed News has learned. Among the podcasts, which were removed from Apples’ iTunes directory, are the show “War Room” as well as the popular Alex Jones Show podcast, which is hosted daily by the prominent conspiracy theorist.Apple’s decision to remove all episodes of Jones’ popular show — rather than just specific offending episodes — is one of the largest enforcement actions intended to curb conspiratorial news content by a technology company to date.… In a statement Sunday evening to BuzzFeed News, Apple confirmed that it notified Jones of the decision to remove the five shows under its hate speech guidelines earlier this weekend. “Apple does not tolerate hate speech, and we have clear guidelines that creators and developers must follow to ensure we provide a safe environment for all of our users,” a company spokesperson said. “Podcasts that violate these guidelines are removed from our directory making them no longer searchable or available for download or streaming. We believe in representing a wide range of views, so long as people are respectful to those with differing opinions.”

Is this a Freedom of Speech issue?

In a word … no.Platform providers are wholly entitled to host whomever this wish to host, and to also remove, for no reason at all, anything. It’s a business decision, pure and simple.The term “Freedom Of Speech” does not in any way mandate that any platform provider (digital, visual, oral, or print) is required to host any content.Anybody claiming that this is a Freedom of Speech issue simply does not understand what the term means.https://twitter.com/MrFilmkritik/status/1026481135847657473

But I guess Cenk Uygur naming his show "The Young Turks" in celebration of the murderous regime that carried out the Genocide of 1.5 million Armenians doesn't qualify as "Hate Speech" to @Apple and @Facebook because he's a liberal, right?https://t.co/SUfsYmYdgE

On top of tormenting the families of shooting victims, Alex Jones/Infowars played a huge role in spreading the Seth Rich conspiracy theory, even after Rich's family issued public pleas to stop.

As @slpng_giants put it: This isn't a right/left issue. It's a right/wrong issue. pic.twitter.com/ffOlQsp8kJ