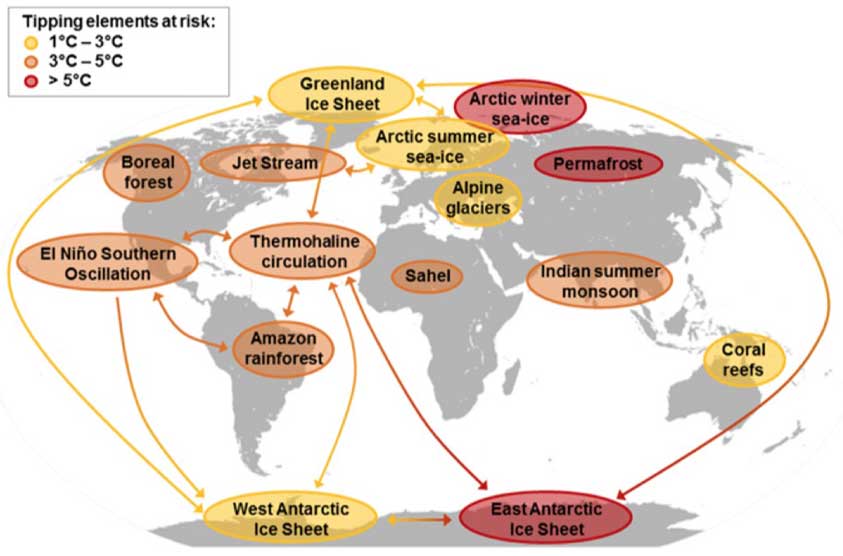 A paper has appeared in PNAS (Proceedings of the National Academy of Science) that is attracting a lot of media attention. Titled “Trajectories of the Earth System in the Anthropocene” it lays out a possibility that we face a runaway climate hothouse. Note the word I’ve underlined. Many of the media stories highly overhype it all and state it as a certainty. Its scary stuff, but at this point just a possibility.

feedbacks could push the Earth System toward a planetary threshold that, if crossed, could prevent stabilization of the climate at intermediate temperature rises and cause continued warming on a “Hothouse Earth” pathway even as human emissions are reduced. Crossing the threshold would lead to a much higher global average temperature than any interglacial in the past 1.2 million years and to sea levels significantly higher than at any time in the Holocene.

We are getting headlines such as …

So let’s turn to the paper itself, the alpha source for all the media stories and mull over what it is telling us. It should however be remembered that this paper is part of an ongoing discussion amongst subject matter experts within the scientific community and is not a PR exercise, it simply explores what might happen.

First, who are the subject Matter experts that authored the paper?

The lead author is Johan Rockström. He is the executive director of the Stockholm Resilience Centre. He and his co-authors are among the world’s leading authorities on positive feedback loops. He expresses his thinking on why he authored the paper as follows …

“I do hope we are wrong, but as scientists we have a responsibility to explore whether this is real, We need to know now. It’s so urgent. This is one of the most existential questions in science.”

You can find it here, and sadly this is PNAS, so it is behind a paywall.

Climate History context: What has been happening is this …

Over the Late Quaternary (past 1.2 million years), the system has remained bounded between glacial and interglacial extremes. Not every glacial–interglacial cycle of the past million years follows precisely the same trajectory (7), but the cycles follow the same overall pathway

It’s a roughly 100,000 year cycle and that happens due to complex orbital variations caused by other bodies in the solar system slightly altering our orbit in regular cycles. That’s not simply a wild idea, we can calculate these variations, and we can also see these cycles in the geologic record.

Where are we now?

We have changed all that. Human activity has pushed the entire climate system out of this cycle. They have a diagram in the paper to illustrate it …

In essence – there now exists the realistic possibility that we have committed the climate system to conditions beyond the envelope of past interglacial conditions. It is not simply going to get a little bit warmer, we have possibly tipped the entire system into a completely new direction.

This is not some future scenario, clearly in our current observed reality things not seen before are happening right now.

Key Point: It’s going to be bad. What is not specifically certain is just how bad it will be.

There is no certainty. What we do next, and also how the various feedbacks play out, will very much determine the answer to that. Yes, they have a diagram for this as well and it illustrates that our choices will play a key role …

Will The Paris Agreement be enough?

The short answer is probably “no”.

If we fully adhered to it then the answer is possibly negative due to the existence of various feedback systems.

The challenge we face is that we don’t just have to reduce our emissions a bit, we need to create a “Stabilized Earth” pathway that steers the Earth’s Climate System away from its current trajectory. There is no avoiding the fact that creating such a pathway and basin of attraction requires a fundamental change in the role of humans on the planet. Our actions would need to be both deliberate and also sustained.

They have a table that lists the negative feedbacks that have the real potential to accelerate global warming.

OK yes, they also have a picture of the various feedbacks as well …

They identify that these tipping cascades fall naturally into about three clusters, each of which will be triggered when we hit a specific temperature threshold.

Everything is connected. Melt the ice sheets and you get an influx of fresh water into the ocean in those areas. That in turn changes the ocean circulation system and temperature. This leads to sustained warming of the northern high latitudes. As a result, this process could accelerate feedbacks or activate tipping elements in that region, such as permafrost degradation, loss of Arctic sea ice, and boreal forest dieback.

How Hot is too hot?

This is the stance they take …

Based on this analysis of tipping cascades and taking a risk-averse approach, we suggest that a potential planetary threshold could occur at a temperature rise as low as ∼2.0 °C above preindustrial (Fig. 1).

We are already damn close to that right now … but … it’s not stated as a definitive number, it’s simply an informed suggestion of what might happen.

What do we need to do to avoid this possibility?

It’s (hopefully) rather obvious – you know the answer, most of us do.

Stabilized Earth would require deep cuts in greenhouse gas emissions, protection and enhancement of biosphere carbon sinks (stop cutting down forests and plant lots more trees). There will also need to be efforts to remove CO2 from the atmosphere, possibly solar radiation management, and adaptation to the unavoidable impacts of the warming already occurring

The most immediate challenge is this – we must act now, the longer we leave it the harder it becomes …

if a planetary threshold is crossed toward the Hothouse Earth pathway, accessing the Stabilized Earth pathway would become very difficult no matter what actions human societies might take. Beyond the threshold, positive (reinforcing) feedbacks within the Earth System—outside of human influence or control—could become the dominant driver of the system’s pathway, as individual tipping elements create linked cascades through time and with rising temperature (Fig. 3). In other words, after the Earth System is committed to the Hothouse Earth pathway, the alternative Stabilized Earth pathway would very likely become inaccessible

What happens if we do stabilise the climate system?

Even if we crack the problem, it’s still going to be bad …

Even if a Stabilized Earth pathway is achieved, humanity will face a turbulent road of rapid and profound changes and uncertainties on route to it—politically, socially, and environmentally—that challenge the resilience of human societies. Stabilized Earth will likely be warmer than any other time over the last 800,000 years at least (that is, warmer than at any other time in which fully modern humans have existed).

In addition, the Stabilized Earth trajectory will almost surely be characterized by the activation of some tipping elements and by nonlinear dynamics and abrupt shifts at the level of critical biomes that support humanity.

The Paper Presents the following conclusions

The Earth System may be approaching a planetary threshold that could lock in a continuing rapid pathway toward much hotter conditions—Hothouse Earth.

If we reach such a threshold and feedbacks kick in, it becomes very difficult for us to change that.

Key Point: They don’t know where that threshold is. They are not wholly certain it is even there, but if it is then they do suggest that is not too far away at about 2C of warming.

The impacts of a Hothouse Earth pathway on human societies would likely be massive, sometimes abrupt, and undoubtedly disruptive.

Avoiding this threshold by creating a Stabilized Earth pathway can only be achieved and maintained by a coordinated, deliberate effort by human societies to manage our relationship with the rest of the Earth System, recognizing that humanity is an integral, interacting component of the system. Humanity is now facing the need for critical decisions and actions that could influence our future for centuries, if not millennia.

How credible is this?

It has not been manufactured out of pure imagination. There is significant evidence from a number of different sources that they list (with references in the paper) …

First, the complex system behavior of the Earth System in the Late Quaternary is well-documented and understood. The two bounding states of the system—glacial and interglacial—are reasonably well-defined, the ca. 100,000-years periodicity of the limit cycle is established, and internal (carbon cycle and ice albedo feedbacks) and external (changes in insolation caused by changes in Earth’s orbital parameters) driving processes are generally well- known. Furthermore, we know with high confidence that the progressive disintegration of ice sheets and the transgression of other tipping elements are difficult to reverse after critical levels of warming are reached.

Second, insights from Earth’s recent geological past suggest that conditions consistent with the Hothouse Earth pathway are accessible with levels of atmospheric CO2 concentration and temperature rise either already realized or projected for this century.

Third, the tipping elements and feedback processes that operated over Quaternary glacial–interglacial cycles are the same as several of those proposed as critical for the future trajectory of the Earth System.

Fourth, contemporary observations of tipping element behavior at an observed temperature anomaly of about 1 °C above preindustrial suggest that some of these elements are vulnerable to tipping within just a 1 °C to 3 °C increase in global temperature, with many more of them vulnerable at higher temperatures. This suggests that the risk of tipping cascades could be significant at a 2 °C temperature rise and could increase sharply beyond that point. We argue that a planetary threshold in the Earth System could exist at a temperature rise as low as 2 °C above preindustrial.

The paper is an important bit of initial analysis. Further research is needed to address three key questions …

In other words, they are telling the wider community: Look at what has the potential to happen. We need to think about the unthinkable right now and do further research into all of this so that meaningful decisive action can be taken.

Human induced Climate Change is the greatest threat our species has ever faced. That is certain.

We may be tempted to find solace in the thought that the scenarios in the paper is just a possibility and not a certainty. However, a better approach is not to lean upon the hope of uncertainty, but to instead take meaningful decisive action that makes a real difference.

What we do in the next decade or two will determine the actual outcome.

This is an important new paper by Steffen, Rockström, Schellnhuber and others. Domino-effect of climate events could move Earth into a ‘hothouse’ state https://t.co/rbRywxZrBo

As a heatwave causes drought and wildfires across Europe, scientists warn the world is at risk of heading towards an irreversible 'hothouse' state https://t.co/MaM4hnuYw4 pic.twitter.com/4qe18otVRr

Hothouse earth is a possibility, not an inevitability. But the uncertainty here isn’t “will it be bad or not”. It’s, “how bad will it be”?