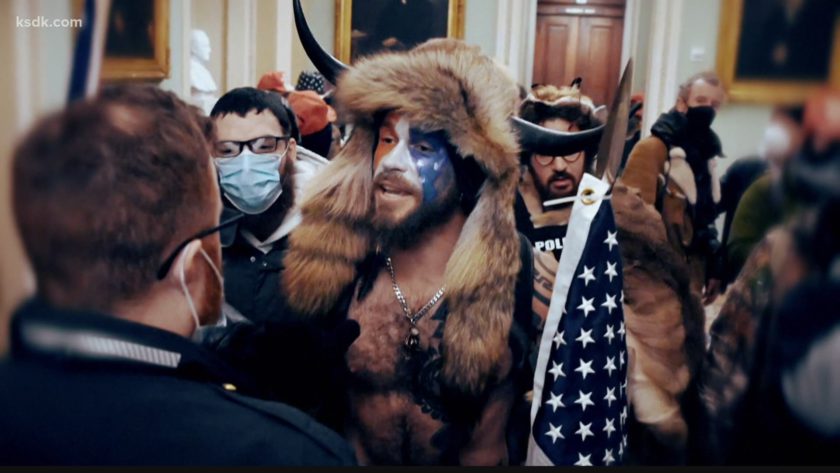 I occasionally write about the QAnon lunacy.

Central to it is the belief that Trump has been especially chosen by God to lead the fight against a Satanic ring of deep state and global pedophiles. Yes, this is indeed pure nonsense, but these nuts believe it, and they also believe the lie that the election was stolen. Trump is quite literally the father of lies (remind me again who, in a religious context, is the official keeper of that title – See Bible reference here for the answer).

He is very clearly not going to have a second term. His supposed Hail Mary play turned out to be classic Trump of bluster and incompetence being incarnated. He riled up a mob who stormed and ransacked the capital. Net effect, rather a lot of pissed off people have now quite rightly impeached him.

So where does QAnon go now?

QAnon in the House

The GOP managed to elect a QAnon nut to the house. Given the sharp left-hand turn they have taken away from reality and off into the Trump fantasy, it really is not a surprise.

QAnon advocate Rep. Marjorie Taylor Greene (R-Ga.) wore a mask with the word CENSORED on it…

Let me play that back for you. While speaking on the floor of the House with a microphone in her face as an elected representative during a rather public debate that was carried by almost every network in the nation and watched by millions, not just in the US but right around the planet, she wore a mask claiming that she is being censored.

The degree of stupidity in play is truly jaw-dropping.

That however is not her Cherry of the cake of stupidity this past week. This was …

Those 75 million who supported Trump have had 4 years of inaction and incompetence. What perhaps truly frightens them now is having credibility and competence in charge once again.

As for supposedly impeaching Biden … for that exactly?

Yes, she is pandering to the delusion held by her base, but as for her doing anything truly meaningful or credible … don’t hold your breath.

Additionally we have seen the big cloud hosting providers, Google, AWS, and Microsoft, refuse to host Parler, so it went down (until they found an alternative).

Meanwhile Trump was finally banned from Twitter and many other platforms, so he has in one sense been gagged. Some claim he is being censored. Gosh, if only he had some sort of press briefing room in his house where he could turn up, and hold a press conference … oh wait.

What is also perhaps fascinating to see how it plays out, is that many big corporate donors are pulling their funding from many in the GOP who are clearly taking a stance against the credibility of the election. Actions really do have consequences …

Corporations are targeting the 147 GOP lawmakers who voted to challenge the 2020 election results in Arizona or Pennsylvania last week, even after the deadly attack on the Capitol by a pro-Trump mob.

One lobbyist described McCarthy calls to donors: “I would equate it to trying to get a plane out of a spin, trying to level the wings.”

But many corporations are not just questioning the GOP’s ability to work with Democrats, they are trying to distance themselves from the ugly scenes in D.C. last Wednesday.…

This might currently be background noise but it is also a very big deal, a potential game changer.

Rather obviously the QAnon fanatics will simply migrate to alternatives. For example Chain-mail-style text messages.

The conspiracy theories will continue to circulate. The ban by major platforms simply motivates them to move on, it does not actually bring these people back to reality.

Manipulators will present social media bans as “evidence” of the deep state being out to get them.

Meanwhile the Real Deep State has them on their radar now

When I use the term “Deep State”, I’m not referring to some nefarious dark conspiracy on a grand scale that has been created to scare and manipulate people with. Instead I am referring to the rather well-known federal agencies we are all familiar with – the national security bureaucracy.

A violent attack against the Capitol that threatened the lives of elected representatives and left people dead means that they have self-identified themselves as domestic terrorists. They have in effect painted a bullseye on their backs. Federal agencies are getting their act together and ramping up their scrutiny and activities. Replace the term “Deep State” with “Rule of law” and you will then begin to grasp the vast resources that are now being deployed.

It is vast and operates on a national scale. All they care about are dealing with threats – terrorists, serial killers, narco-traffickers and foreign governments. Political allegiance or beliefs play no role, their loyalty is to the stability of the Republic itself. MAGA fanatics have now demonstrated that they are a threat and so are on the radar.

In essence, the capitol riot was a game changer, not just for Trump, but for all of them, QAnon and MAGA.

U.S. code defines “sedition” as using “force to prevent, hinder, or delay the execution of any law of the United States.” That’s what they did. The legal process they tried to stop is one of the most important in American democracy.

A line has been crossed and QAnon’s fingerprints are all over this.

Arrests of people caught on camera storming the Capitol are now happening.

If you are part of QAnon, then now would be a really good time to jump ship and get out.