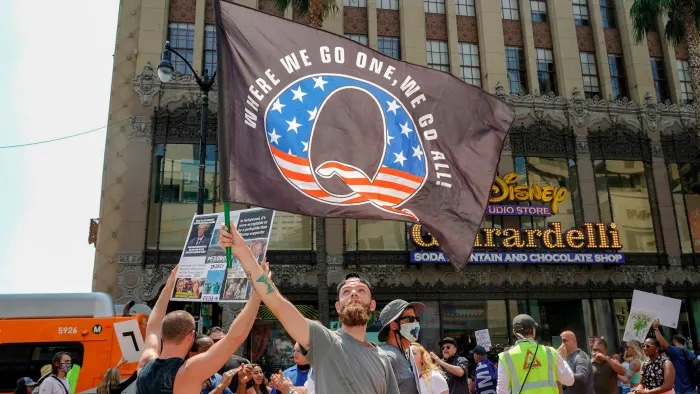 It has been a rather eventful week. For those that embrace QAnon as “truth” the big event is that the supposed Day of Reckoning failed to happen. IQ45 simply packed, waved goodbye, and rapidly scuppered away.

For those into QAnon, there were supposed to be power blackouts across the US, military tribunals led by Donald Trump, and the mass execution of Democrats in the streets. None of that happened. It never was going to happen, but there was no explaining that to these folks. Every previous “prediction” has failed and so this latest one did exactly the same; nothing happened. The only way the believers were going to find this out was the hard way.

Central to the QAnon belief is that Trump has been especially chosen by God to lead the fight against a Satanic ring of deep state and global pedophiles. Yes, this is indeed pure nonsense, but these folks were quite sure that he would be either there for a second term and/or something dramatic would happen.

So where does QAnon go now and what do all those inside make of a very peaceful transition?

It is beginning to dawn to many that Rep Greene is not simply a little bit eccentric because she embraces a few quirky QAnon beliefs. The realisation emerging is that she is an Olympic standard nutter.

Greene’s account “has been temporarily locked out for multiple violations” of Twitter’s ‘civic integrity policy’, a company representative said in an emailed statement.

What is perhaps fascinating about her is not that she got elected, but rather that the GOP selected her as their candidate. It tells us a great deal about them and not just her.

QAnon is not her first disconnect with reality and facts. She has a history. For example in 2018 she was claiming that the Parkland school shooting, where 17 students and faculty members at Marjory Stoneman Douglas High were killed, was a ‘false flag operation,'”.

The latest gem on her cake of stupidity is that she has filed articles of impeachment against Joe Biden. It is all meaningless of course, it will not move forward. All she wants is to tap into a flow of funding from the QAnon crowd.

Meanwhile CNN has published: “Fact check: 11 false claims Rep. Marjorie Taylor Greene has tweeted in the last month“. This is neither a surprise nor a shock, it is exactly what we would expect. What would have been truly a jaw-dropping shock is if she tweeted something that was actually true. (Don’t hold your breath waiting, misinformation is part of her DNA).

QAnon Shaman is in deep trouble

He was the most distinctive figure in the mob. Jacob Anthony Chansley, the shirtless, tattooed man often referred to as “QAnon Shaman,” stood out in a headdress made of coyote skin and buffalo horns.

Rather obviously Federal Officials have been digging into his motives. The Washington Post reports …

In a court filing late Thursday, federal prosecutors in Phoenix wrote that “strong evidence, including Chansley’s own words and actions at the Capitol, supports that the intent of the Capitol rioters was to capture and assassinate elected officials in the United States government.” …

… the 33-year-old Arizona man left an ominous note for Vice President Pence at his desk in the Senate chamber: “It’s only a matter of time, justice is coming.”…

We also learned this …

Since his arrest last week, Chansley again made headlines after his mother, Martha Chansley, said he had been starving himself in jail because he “gets very sick if he doesn’t eat organic food.”

His lawyer was hoping that Trump would pardon him, but no, that did not happen.

So yes, actions really do have consequences. Putting your faith in IQ45 is never a good idea.

Responses to the Peaceful transition

As you can perhaps imagine, for those inside QAnon, Wednesday 20th was a day when their batshit crazy faith hit a deep crises.

Like disappointed Doomsday believers, there are those that are inevitably just moving the date. Travis View, a QAnon researcher, told The Washington Post: “Others are coming to believe that the storm they were expecting is still going to happen but some time during the Biden administration.”

What the experts expect to happen is a splintering of QAnon, with neo-Nazi, anti-vaccine and anti-5G groups preying on the former adherents.

QAnon adherents appeared to have fractured into two groups on popular far-right message boards Wednesday, with some realizing their crackpot conspiracy theory was a fraud, while others tried to somehow keep the flame of the Crazy Candle alive.

Ron Watkins, the founder of 8chan who is one of several people suspected of being the anonymous poster “Q” who spawned the conspiracy theory, conceded shortly after Biden was sworn in, telling his supporters it was time for believers to keep their “chins up” and “go back to our lives.”

Up until the final minute of Trump’s presidency, some QAnon adherents were cheering for Trump to do something spectacular, with one instructing fellow followers Wednesday morning to “pray” because the next five hours would “determine the fate of the world.” They got that part right.

That optimism unraveled for some as the day wore on, especially after Trump gave no hints of a plan to take over the U.S. in his final speech at Joint Base Andrews, with one user lamenting on Telegram that “it simply doesn’t make sense that we all got played.”

… and then this happened …

By midday, a new spin to the conspiracy theory gripped the far-right message boards: Biden has been their savior all along, a twist multiple QAnon influencers threw their support behind.

“Biden is Q” a post on the donald.win read, while others brushed aside that theory and urged believers to stick with Trump.

We know from previous experience that what happens when prophesy fails is that believers move the goalposts, modify their beliefs, then double down on the promotion of crazy ideas.

The thought that many will abandon QAnon many indeed be true for some fringe believers who dabbled in it all at the edge. However, for the hard core, those that have invested in it all at a very deep emotional level, will stick with it. This is because they have embedded it all as part of their psychological identity, they are simply not open to letting go.

The conspiracy theories will continue to circulate, and will be modified to handle reality.

If you are part of QAnon, then now would be a really good time to jump off the train to crazy town.