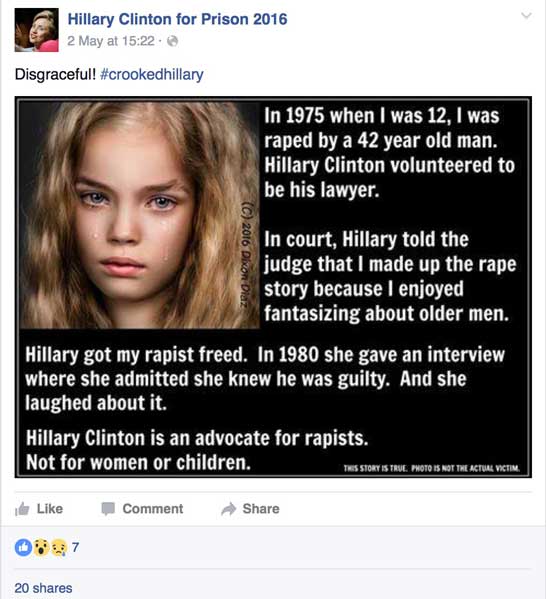 So I’ve been seeing postings such as the following popping up, and if this was in any way factual then there would indeed be questions to be answered.

One ever so small tiny flaw is that it is not in any way factual.

OK, that is not actually such a small problem, but is actually quite large, because you are being emotionally manipulated and deliberately deceived. So what are the facts here?

Chris DiOrio, a criminal defense attorney, researched it in detail, and this is what he discovered …

And here is where I take a position unfamiliar, and DEFEND Hillary Clinton – not as a candidate, but as a fellow attorney.

It’s this kind of uneducated, knee-jerk, hateful stuff that poisons America, not just politically, but by fostering the ongoing abject midunderstanding about how the criminal justice system works, and as a criminal defense attorney I hear this ignorant claptrap constantly! So, I researched this case, and every single statement in it is not just false, it’s slanderous.

(A) She was appointed as a legal aid attorney; she didn’t volunteer.

(B) She asked to be relieved from representing the client, and the judge denied the request.

(C) She didn’t “free” her client; she negotiated a plea deal for jail time, like every other defense attorney has done.

(D) If she did not zealously advocate for her client, or tanked the case, she could have been disbarred.

(E) In the 1980 interview, she talked about how her client failed a polygraph, and then laughed while saying she would never trust a polygraph ever.

(F) Even the picture used is not the actual victim, and you can be damned well sure they use the tearful angelic blonde white girl to drive the hate.

I tell my children to reserve the word “hate” for things that are truly deserving. So, in that vein, here goes: I HATE when people refuse to actually educate themselves and chose to castigate attorneys for doing what they are ETHICALLY REQUIRED TO DO! If you want to come at me with stories of unethical counsel, I acknowledge they exist, but I loathe when people say the word “lawyer” or “attorney” with the same tenor and tone as they say the words “diarrhea” or “rectal cancer”.

Next time you need legal assistance, you WANT someone to use all ethical means to protect you. Or, try calling a friggin’ plumber – see how that works. But, if you do, please make sure to bring your own toothbrush to court, because the ones they hand you out at the state prison really suck.

So why the outright lie?

At one level I do not truly grasp why anybody would ever seriously support Trump to such a degree that they felt it appropriate to manufacture such fiction, and yet perhaps we all do understand. We can clearly observe that he appeals at an emotional level, and taps into the prevailing undercurrent of disillusion, but the manner in which he conducts himself tends to attract people who are not exactly ethical or decent individuals.

Not only is the criticism of him wholly factual but also quite clearly very little of what he says is actually true (and that is a verifiable objective well-established fact) and so obviously those that support him do not give a toss about that. His misogyney, racism, xenophobia, and support for actual violence is common knowledge, you just can’t miss any of that and plead ignorance of it. The fact that he is willing to behave like this will indeed stand, not just as an emotional attractor, but also as an example to be emulated by those that are ensnared by his mythological political banter, and so it is not exactly a huge leap for drivel like that pictured above to quite naturally flourish wherever the Trump shadow falls.

The above yarn is designed to appeal at an emotional level and manipulate you by invoking a feeling of revulsion towards Hilary, and yet in stark contrast to the wholly factual criticism of Trump, it is not just an outright lie, but rather is blatant slander.

You might, or perhaps might not agree with her politics and policies, (either is fine), but this fictitious rhetoric is something quite different. It does not in reality tell us anything at all about Hillary, but instead speaks volumes about the complete lack of integrity or honesty that grips some minds during this quite bizarre election season, one that is unlike anything ever seen before.

If you are wondering who you can actually believe, well ask yourself this – who, when measured by the fact checkers, is the most truthful?

It turns out that Hilary Clinton is, and Bernie Sanders is a very close second, and yet on the sole basis of pure fiction she is reviled by many.

It strikes me as wholly odd that the motivation that drives so many to support Trump is that they they are fed up with the political establishment manipulating and lying to them, and yet the candidate they opt to reach out for as a solution is the master of emotional manipulation and deception. Luckily there are still many sensible and decent people out there, not just within the Democratic camp, but also among the Republican ranks as well, all of whom are quite horrified about what is going on.

Now here is an obituary about the sad passing of Ruth, and I can’t help be think that I would indeed have loved to have known her … 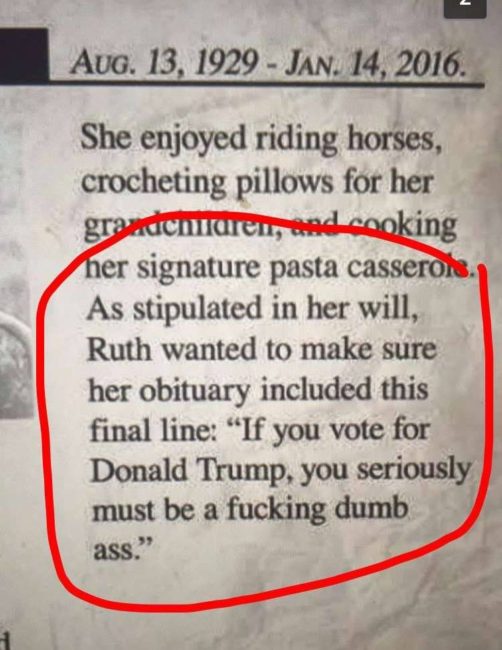 Beyond the Normal Rough and Tumble of Political Rhetoric

Politics by its very nature stirs up heated verbal vomit, it comes with the territory and is to be expected, and so anybody who dips their toe into that cess pool will need to develop an excessively thick skin. However, what is at stake here is something deeply troubling. This is all far more than the usual verbal mud being hurled by equals who simply have different ideas, there is something far more fundamental in play that has now emerged.

When a faithfully married black president who was the son of a single-mother, the first black editor of Harvard Law review and a professor of constitutional law is considered unintelligent, immoral, and anti-American by the right while a xenophobic, misogynistic, “serially philandering”, trust fund kid who quotes from the National Enquirer, peddles conspiracy theories, routinely calls women ugly and fat, calls McCain a loser for having been a prisoner of war, and who has advocated torture and the bombing of women and children has captured the hearts of a majority of Republicans. This is white supremacy folks. Plain and simple. – Dr Jonathan Giftos