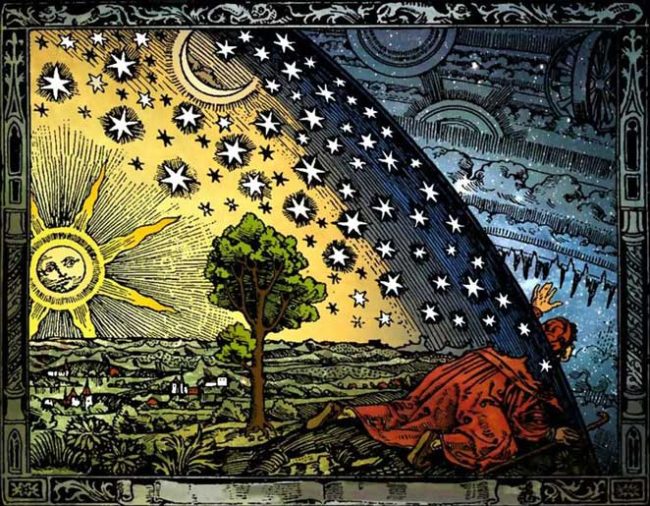 Is the Genesis creation myth a metaphorical or poetical story that works at some level, or is it completely are utterly crazy because it is just too out of step with our modern understanding?

If you read the text then you will discover a few rather surprising claims, for example …

Now let me spell out the implications of that for you. This is a part of the story where we already have planet Earth, along with grass and fruit yielding trees, because they were all part of day 3. Coming into existence after these we now have the creation of the sun, the moon and all the other stars in the universe. This makes no sense, for a whole host of reasons, namely what exactly does the concept of a day mean if there is no sun or moon until day 4, and how exactly can you have planet earth with all plant life if the rest of the entire universe and also the sun and moon does not yet exist.

It is both poetry and myth, but clearly not factual.

As a Metaphor – Day-Age Creationism

It is perhaps popular within some religious communities to regard the Genesis story as one where the days are not literal days, but are instead simply periods of time. This idea is the most popular variation of creationist belief and is known as day-age Creationism.

Believing day-age creationism or some variation of it is perhaps the only way some can realistically attempt to embrace both the bible as the divine word of God and also accept the facts that science shows us to be true about the origins of the world around us. Within day-age you just keep stretching the days within the genesis creation story until you get a match to real geological processes.

So Does it work, can you really do it?

If indeed we get the sun, the moon and all the stars in the universe after all plant life on planet earth, then clearly no, not even bending it like this works.

As A literal Belief

There are however some who advocate Genesis to be a literal and wholly factual truth, so when faced with rather obvious glaring issues such as the above, then how do they reconcile that belief with reality?

Well, here is Ken Ham, the leader of Answers in Genesis tweeting the answer a couple of days ago …

… in other words, you resolve the dilemma by simply proclaiming the Bible to be right, and everything or anything that conflicts with that conclusion to be wrong, and notice how evidence-based scientific consensus is deemed to be a religious belief.

This stance more or less blows away not only all of our modern understanding, but also the entire scientific methodology itself, for this is a line of thinking that acquires knowledge, not via observation or the testing of any hypothesis designed to explain any observations, but instead rests entirely upon the conclusion that the Bible is right, hence anything and everything else is wrong no matter how clear the evidence is.

How does he know this, how can anybody possibly test and verify or falsify such a conclusion when faced with a methodology that will simply discard anything, no matter how robustly verified it is?

When faced with people like this it might indeed be tempting to consider that there is something seriously wrong with the educational system, but the issue here goes far deeper than a lack of understanding or a lack of information. The information is there, and is easily available, and so the problem is not that it is being misunderstood, but instead is being rejected.

Once again no, Dr. Marcus Ross explains just how smart and highly he actually he is, and yet also embraces creationism as “truth” …

on February 12, 2007, my picture was on the front page of the New York Times, with the headline “Believing Scripture but Playing by Science’s Rules.” Why the national spotlight? I had just received a PhD in geosciences from a respected secular university, and I am a young-earth creationist.

It may indeed be tempting to consider the creationist stance to be rooted in not just ignorance but pure stupidity, and while it might be emotionally satisfying to assert that, this does not actually explain it.

The key to understanding this is that humans develop deep emotional attachments to political and religious ideas, and once rooted, as time and resources are invested, that emotional attachment grows stronger and deeper. For a Creationist to see the light (if you will forgive the religious metaphor) it is an extremely challenging journey because letting go of the concept is almost on par with a bereavement, because it is not just about learning something new and is instead a breaking of an emotional bond that has defined and given a sense of identity and an illusion of meaning and control to a human life.

It can be done and has been done and often happens, not in one big leap, but rather as a series of small steps that are perhaps akin to a deep sea diver very slowly rising and decompressing until they suddenly break surface and discover a new freedom. Individuals might first move from literal creationism, to perhaps day-age creationism and then later on to a full acceptance of our modern understanding, but perhaps with the thought of “well that is how god did it“, and then on from there into the discovery of how things really are.

Well dear reader, whoever you are, as we walk together on the journey we are all on, I do encourage you to be inspired to find out the things that are really true and to never be satisfied with answers that cannot be questioned or tested.