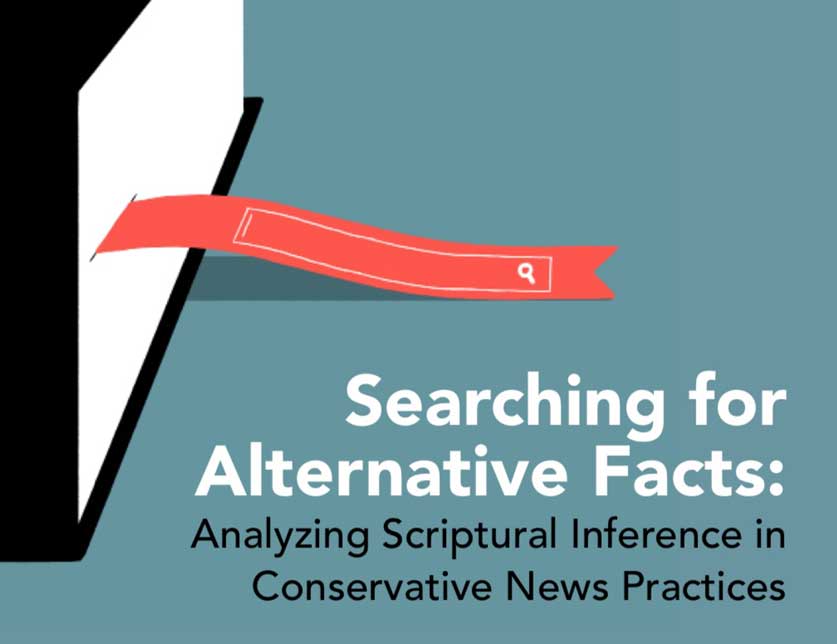 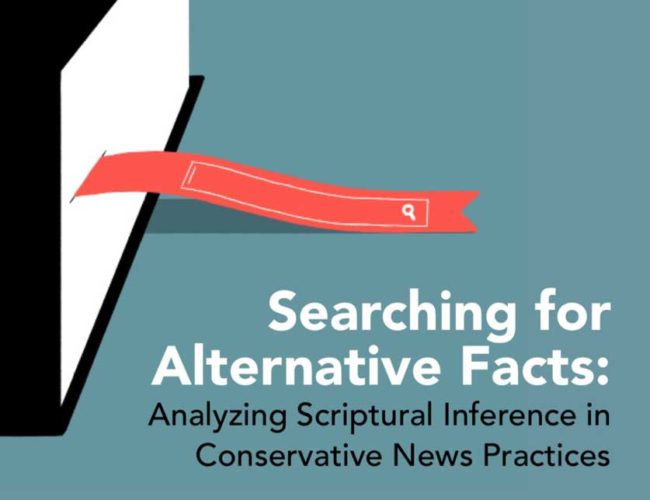 Francesca Tripodi, a postdoctoral scholar at the University of Virginia, has released a report that is quite frankly fascinating. Titled “Searching for Alternative Facts” and released on 16th May, it lays out the results of her research within upper-middle class conservative Christian communities in Virginia in 2017.

People who believe and read the bible often tend to interpret it so that what they read aligns with the things that they believe. Dr. Tripodi uses this practise as a lens for understanding the relationship between so-called “alternative” or “fake news” sources and contemporary conservative political thought.

“They critically interrogate media messages in the same way they approach the Bible, focusing on specific passages and comparing what they read, see, and hear to their lived experiences. I term this media interrogation process scriptural inference.”– Francesca Tripodi

On media consumption and interpretation:

On “fake news” and ideological bias:

The full PDF of her report that runs to over 64 pages can be downloaded from this link.

Here are a few fascinating insights I’ve gleaned from it.

Since Google is seen as a neutral purveyor of information, it becomes a conduit for “unbiased” news. Given their low trust in mainstream media, members of the conservative groups I observed “fact check” the news by typing “exact phrases” into Google. Following the principles of scriptural inference, they feel the need to “do their own research” in order access information they can trust. While scriptural inference might be a sophisticated mechanism for media critique,

the technological underpinnings that influence their query results receive little scrutiny. Not only can the slightest shift in language dramatically skew the ideological position of the returned texts, this report also demonstrates that Google and YouTube can unintentionally expose individuals who consider themselves “mainline conservatives” to “far-right” and “alt-right” content.

In many minds the term “Conservatism” = religious belief

They were also quick to claim that many Republicans are not conservative. “Being conservative,” one woman clarified, “really goes back down to morals and beliefs, instead of political parties.” Through my interviews and observations a clear pattern emerged that comprised conservatism as “faith, family, the Constitution, and national security.”

It’s a bond that pull together politics and religious belief.

The most common connection between faith and patriotism is displayed in the “Prayer & Pledge” ritual. Before the official beginning of any gathering, regardless of the context, there is a prayer. Silas, a college sophomore with dark brown hair parted on the left, frequently led the prayer for the College Republican group. Before a silent crowd on the Thursday before the 2017 November election election, he hung his head in reverence asking “that God would help GOP people get in office so that they can help to serve his will.” Directly following the prayer, we would all rise and look to the American flag, placing our right hand over our hearts.

During one of the luncheons I attended, a heated discussion between two older couples broke out after the pledge, regarding how to properly say “under God.” Shaking his finger sternly, one man said that the other paused incorrectly. “It’s gotta flow,” he said “one nation under God.” The other couple shook their heads, responding that it was the saying of the phrase that mattered, not how you said it. Indeed, it was clear that for everyone in the room, the inclusion of the phrase “under God” was essential. In every circumstance, “under God” was recited louder than the rest of the pledge to emphasize its importance—despite the fact that it was not part of the original pledge

Following the Prayer & Pledge we would recite the Virginia Republican Creed, a statement that binds the ideas of Christianity, free-market enterprise, and limited government intervention together.

Who the heck are these fanatics?

She explains where she was …

The report is long and detailed. It grants a window into another world where faith and politics are intertwined. It is a place where facts are myths, the media is not reliable, and “alternative facts” are successfully harvested by interpreting things to fit in with, and align to pre-existing beliefs.

She was also interviewed about this by Harvard’s Nieman Lab.

The interview is titled “From Bible study to Google: How some Christian conservatives fact-check the news and end up confirming their existing beliefs“…

OWEN: You looked at two groups — women in a Virginia Republican women’s organization and people who were affiliated with them, and then members of a college Republicans group. They were all white and they all identified “conservative” (rather than “Republican”) as their political affiliation. You write about how the practice of close Bible reading shaped the way they read news, but I’m wondering, did everyone you talked to go to Bible study? How did they learn these reading techniques?

TRIPODI: I saw this first doing my interviews and going back through the text — people would, time and again, be saying, “You have to do your own research.” “You have to go back to the words.” “Those weren’t his words.” “Look at the Constitution. Those words aren’t in the Constitution.” I kept hearing this emphasis on the words.I was talking with the lead on [Data & Society’s] media manipulation team, and she said it reminded her a lot of Bible study. I was like, “Oh, I should ask if any of the people in these groups go to Bible study,” and a bunch of them did. So I went to a few Bible studies with a college student, and a few led by one of the participants in the older [group of women]. And I realized that’s how they were applying the deep reading of Bible practices into other spaces.

I’m not saying that all constitutional conservatives even go to Bible study. But this practice of returning to an authoritative text and leveraging your own personal dissection of it, rather than accepting an elitist interpretation of a text, is fundamentally bound to this practice within Protestant evangelical churches.

These are not poor impoverished people left behind, but instead are affluent and well educated, and yet also reaching for a “truth” that is fictitious. The depth of self-deception is quite frankly a scary read.