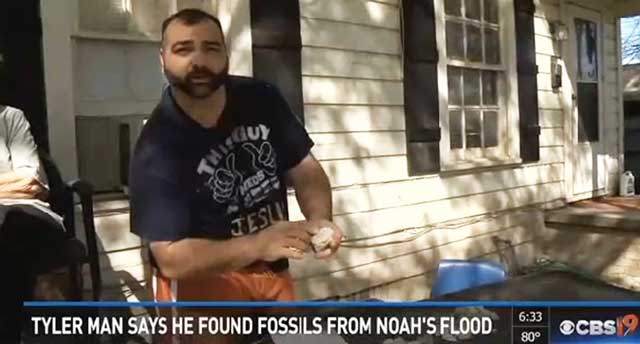 So today’s weird news is the story of a Texas resident (well where else would you find this) who has made the news because he has discovered “proof” that Noah’s Biblical flood really happened. RawStory reports …

A Texas man who discovered what he believes to be prehistoric fossils in his aunt’s front yard has received confirmation from a self-described biblical scholar and fossil expert — although he has yet to see them, reports KYTX.

According to Wayne Propst, he was replacing soil in his aunt Sharon Givan’s yard when he made the amazing discovery of the fossilized snail shells which he believes date back to the time of Noah’s flood.

“What’s really interesting to me is we’re talking about the largest catastrophe known to man, the flood that engulfed the entire world,” Propst explained, while showing off fossilized remains and adding, “Noah’s flood in my front yard. How much better can it get?”

So he now gets his 15 minutes of fame via the local media, and it is not because people are gasping in awe at an amazing discovery, but rather because most are laughing are the complete and utter lunacy of it all.

As noted by the CBS anchor in the above news clip, “This is one story that may be hard to believe” … er yes, no kidding.

But his “evidence” has been verified by an “expert”

(Yes, I really do need those air quotes, words such as “expert”, “evidence” and even the word “museum” are being grossly abused).

His go-to guy was a self-proclaimed nut Joe Taylor, the director and curator of a creationist “museum”, and this “expert” immediately verified it all without actually seeing anything at all, and immediately declared … “that the fossils indeed are a remnant of the Biblical flood that covered the Earth due to God’s wrath“.

So basically a guy finds a fossil and his immediate conclusion on the basis of sight-unseen confirmation by a nut is that it is “evidence” of Noah’s Flood 4,500 years ago. What can I possibly say except welcome to a small sampling of what goes on in Gods chosen country … Texas.

What we do actually have here is good solid robust evidence that the educational system in Texas is seriously flawed.

Many human civilisations do have stories about floods, but that is not because there was a universal flood, but rather because for very practical reasons most early humans tended to settle and live near a reliable source of fresh water that will at times often flood.

If curious, you can read up on the Noahs Ark myth here, and please, if you are going to assert the claim as fact, then you will need to cite independently verifiable and credible scientific evidence. Waving a bible at me which simply contains a rehashed Babylonian flood myth does not cut it.