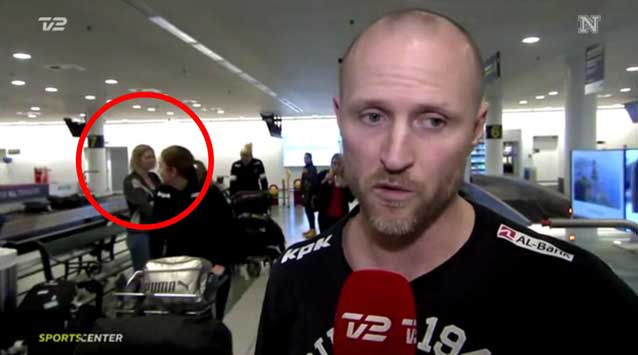 The following clip has caused a bit of a stir on the Internet. It shows a chap being interviewed, and as you watch, the lady on the left just vanishes. What happened, was it aliens, the rapture, or something else? If it was the rapture then I guess that makes her the only true believer.

First, let’s look at the clip itself …

Clearly it has caused a bit of interest, the clip has only been up for a couple of days and has already been viewed over 1 million times, and that is not the only copy of the clip, it is found in many other places as well.

What caused the vanishing lady?

The immediate conclusion you reach perhaps will be dictated by how you think about things.

What is clear is that we don’t actually know, and that is perhaps what makes it fun, and so if you are going with “I don’t know how, but it was not supernatural”, well that is a wholly rational response.

So what actually happened?

Then again some might indeed be rolling with the idea that she flew with Mary Celeste Air, and the reason for such a conclusion is clear and understandable. The phrase, “Well I saw it with my own eyes” is often used for many claims and so this illustrates why such statements should perhaps be treated with caution. Clearly subjective human experience is prone to illusions like this one.

Viewer beware: No matter who who are or how smart you are, you can be fooled.