Would you like to win $250,000? To claim the prize, all you need to do is to demonstrate significant evidence of any paranormal, supernatural, or occult power.

This is not a prank, nor is it a stunt. The prize money is real, and so it the offer. A document certifying that the $250,000 exists can be verified with Barry Karr ([email protected]), executive director of CSI in Amherst, New York. It is available upon request.

The offer come from CFI. Here is the link to their website where they explain …

Can you demonstrate paranormal ability?
Are you interested in earning $250,000 dollars?

The Center for Inquiry Investigations Group (CFIIG) at the Center for Inquiry-Los Angeles offers a $250,000 prize to anyone who can show, under scientific testing conditions, significant evidence of any paranormal, supernatural, or occult power. The CFIIG works with the applicant in designing the test protocol and defining the conditions under which a test will take place. CFIIG representatives will then administer the actual test. In most cases, the applicant will be asked to perform an informal demonstration of the claimed ability or phenomenon, which if successful will be followed by the formal test. The CFIIG conducts demonstrations and tests at CFI West in Los Angeles, California, in the San Francisco Bay area, or in special circumstances at one of our affiliates around the world.

Below the above you will find details of how to apply along with the terms and conditions.

They also have a Frequently Asked Question page.

What is perhaps the biggest and most well-known challenge like this was the offer made by the James Randi Educational Foundation (JREF) to pay out one million U.S. dollars to anyone who could demonstrate a supernatural or paranormal ability under agreed-upon scientific testing criteria. That started in 1964 and ran until about 2015.

My Notes from an actual test (the JREF one)

Here are my notes and pictures from a JREF Challenge applicant being tested in 2014. The claimant was a Mr Fay Wong, age 34, who asserted that he could use his hands to heal.

After the test that fails, the claimant is asked if he will accept questions from the audience. He agrees, and here is an extract from my notes of this Q&A …

There are in fact many other tests

The CFI and also the JREF tests are not unique, many others also offer similar prizes.

Historically such offers have been around since the 1920s when Scientific American offered a $2,500 prize. Harry Houdini was famously a member of that investigating committee.

In all this time nobody has ever successfully demonstrated anything paranormal or supernatural under scientifically controlled conditions.

A successful demonstration would be truly fascinating. Over the year many sincere individuals have tried and failed.

We live in a world filled with supposed psychics and religious people who claim they can perform miracles, yet none have ever demonstrated such an ability.

Those claiming such abilities can be divided up into two camps. Those they know they are just running a con and using trickery, and those that sincerely believe they have a gift. Many of those that sincerely believe, often try to pass such tests, and when they fail what is common is a retreat to a position where they still believe and proceed to think along these lines …

Meanwhile the big-name folks who know it is all just a sham, duck any offer turn up and demonstrate that they really can do what they claim they can do.

CFI continues to test for the supernatural

CFI advise that they have reached out to Tyler Henry, who has the Hollywood Medium shows. So far he is a no-show.

Of those they do apply, one of the latest was the lightning man who was informally tested on June 20, 2020 …. 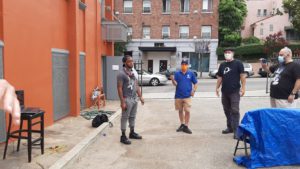 …The applicant’s three-part claim included emitting static electricity from his hands, creating lightning in the sky, and teleporting 3 or more feet….

… Upon being introduced to the tarp barrier, TR said that he “can’t go through things”, and reminded us that he must be moving to teleport. He soon after showed us what he meant and walked around the barrier in a sort of herky-jerky motion. He asked us if we saw the teleportation, and we replied that we did not. We only saw someone walking. We offered to show him the just-shot video of him, and he declined to view it….

… We then moved on to TR’s claim of being able to emit electricity from his hands and put lightning in the sky. TR let us know that he had to be listening to music to generate a charge. We monitored both his hands and the sky above us while TR closed his eyes and listened to his earbuds. We observed no lightning in the sky or sparks coming from his hands. He said he sees it, but we did not, nor did the video cameras….

… TR discussed the origin of his abilities, black magic, God, and other thoughts about his abilities. Jim asked about the rehab facilities TR was in, and if he was given any medication for what he was experiencing. TR said he was there to get off cocaine…

…The CFIIG and TR parted amicably, after it was agreed that no paranormal powers had occurred.

It is important to note that claimers are treated with dignity and curtesy, there is no room for mockery, There can also be no avoiding respectfully asking the obvious questions.

Some of the very best paranormal testers and investigators are not scientists, but instead are illusionists and magicians, for example Harry Houdini and James Randi. This is perhaps because their entire career has been focused on fooling people with illusions and tricks and so they are not only familiar with all the tricks, but they also do understand how easy it is for all of us to be fooled and tricked.