Nothing too serious today, just a bit of fun.

There is a spoof video doing the rounds of a human sacrifice taking place under the cover of darkness at CERN.

Some have been reporting that this is “Probably” a prank, and to that I can only add a facepalm to the thought that anybody gave more than 2 seconds to the idea that this just might be real by spicing up the story with the word “probably”. Yes, Mashable went with “Probably”, but hey, welcome to the media silly season (or to use the US term, the slow news season), a time when those hungry for clicks and views to keep the advertising revenue flowing opt to spice up things a bit with attention grabbing stories.

What is the alpha source for this clip?

It first popped up in the “Stranger than fiction” Facebook page about one week ago on 11th August.

As an aside, most of the stuff  I can see on the STFN Facebook page is all the usual conspiracy stuff, 9/11 inside job, rigged DNC elections, free energy, etc… In other words, if you read it on STFN, then it is not actually “stranger than fiction” because it is fiction.

Is Anybody actually taking this seriously?

Sadly yes, checkout some of the comments under the Stranger Than Fiction posting, but given their content and target audience, that is not exactly a huge leap for them.

What does CERN say about this?

“Whoops, you caught us” perhaps?

No, of course not, they have the following press guidance …

I have seen a video of a strange ritual at CERN, is it real?

No, this video is a work of fiction showing a contrived scene. CERN and its on-site accommodation fills up with scientists from across the world coming to CERN as part of their work. Work at CERN can take place 24 hours a day, 365 days a year with shift work and data analysis. Persons that are authorised to access the CERN site sometimes let their sense of humour go too far, and that is what has happened on this occasion. The video was filmed from an office building; strict safety systems are in place to prevent any unauthorised access to technical and experimental facilities. CERN does not condone this kind of spoof, which breaches CERN’s professional guidelines, and is currently carrying out an internal investigation.

What is that weird Statue at CERN? 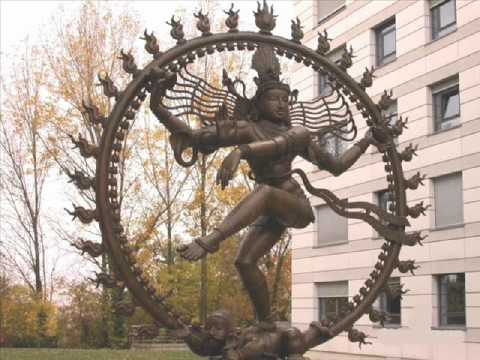 The Shiva statue was a gift from India to celebrate its association with CERN, which started in the 1960’s and remains strong today. In the Hindu religion, Lord Shiva practiced Nataraj dance which symbolises Shakti, or life force. This deity was chosen by the Indian government because of a metaphor that was drawn between the cosmic dance of the Nataraj and the modern study of the ‘cosmic dance’ of subatomic particles. India is one of CERN’s observer states, along with the USA, Russia and Japan. CERN is a multicultural organisation that welcomes scientists from more than 100 countries and 680 institutions. The Shiva statue is only one of the many statues and art pieces at CERN.

I guess the core issue here is that there are some out there who are truly daft enough to think that the word “scientist” is spelt “satanist”, and so a couple of pranksters at CERN have been willing to mock that with this bit of silliness.

If they get caught, then it might turn out to have been a career decision, but I suspect nobody, apart from the CERN PR department, actually gives a toss.