This is not a posting about one specific variation of belief, but I will start with one to illustrate the point I’m making.

Hemet Mehta, the Friendly Atheist has been doing a series of videos on what various beliefs actually believe, and one of the latest is 10 Things You Should Know About Seventh Day Adventists. I guess most could probably nail the Saturday bit, but as for the rest, perhaps not. Some of it is, if I may be brutally frank, truly weird stuff …

But what makes them unique?

— Jesus is coming back very soon. Like not in our lifetime soon… but like now soon. The word they use is “imminent.” And only people who rest on Saturday will be saved.

Remember how God created the universe in six days and rested on the seventh? Obviously that was on Saturday.

What if you die before that happens? Then you just have to sit there unconscious in your grave until the day comes. Which I hear will be very soon.

They’re just going to be permanently destroyed. Because God grants us eternal life… so if you don’t accept God, you don’t get the joy of burning in Hell forever.

When Jesus comes back — which is soon — God’s gonna commit the biggest act of genocide you’ve ever seen.

Which also means they don’t believe in Hell. Because no one could end up there.

— God’s going to determine your faith through a process called Investigative Judgment. Basically, until the time when Jesus comes back — which is happening any moment now — God’s investigating your life to figure out your fate.

It’s not enough that you believe in him. You also have to live a life in accordance with his rules. He’s always judging you…

They abstain from alcohol and tobacco… and coffee and soda… and unclean meat like pork.

Because those things defile your soul. Not bad ideas… but the reasoning is horrible.

— Their prophet was a woman. Ellen G. White. So that’s different. And kind of cool in a way.

But that’s the only way she’s different. She saw visions in 1844 and the religion sprang from there. Those visions came after she suffered a traumatic brain injury as a child and was in a long coma which many people believe led to epileptic seizures.

But I’m sure that had nothing to do with it.

— They think the Catholic Church is the Whore of Babylon and the Pope is the Anti-Christ.

They think less of the Catholic Church than most atheists do!

Several of the commenters get into an argument about it, and one points out that other commenters under the video have popped up objecting that the above is not what they believe at all. Examples are cited … 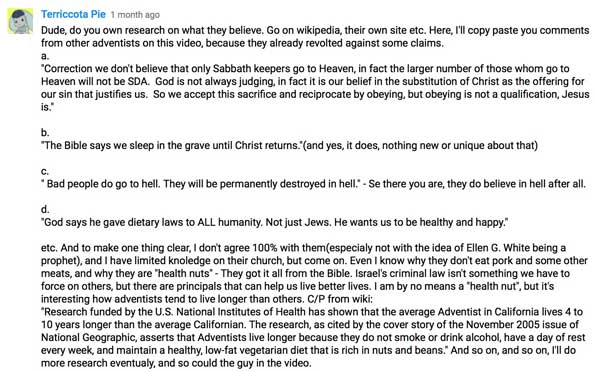 In reply, another commenter points out that Hemet is actually correct,  and he can verify this because he was inside for 12 years … 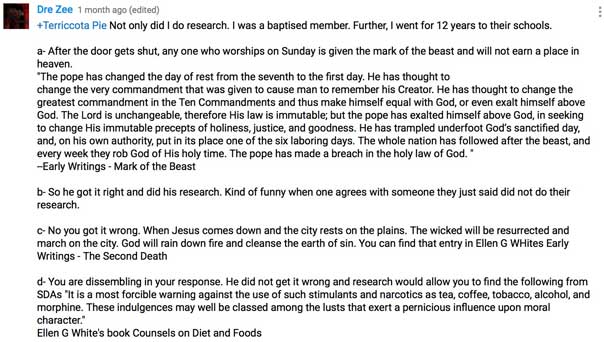 The Buffet table of belief

Clearly the first guy was cutting and pasting what other seventh day adventists had claimed, and yet in reply the second guy was able to point out that what Hemet wrote was basically correct, because those are the official beliefs.

It turns out that this is actually a generic pattern within every belief.

This is because belief is not actually a binary condition where you embrace a specific set of ideas, but is instead more akin to a buffet table where those that participate come along and pick up the bits they like and happily ignore and discard the bits they don’t like.

Here is another fun example.

Catholicism officially advocates that birth control is wrong, and that has always been their stance. Meanwhile back in today’s world, most Catholics ignore that and use birth control.

It is perhaps like this because belief is not an intellectual exercise, but instead is an emotional experience. Finding that people are generally entranced emotionally with belief while not embracing the entire official party line should perhaps not be a surprise.