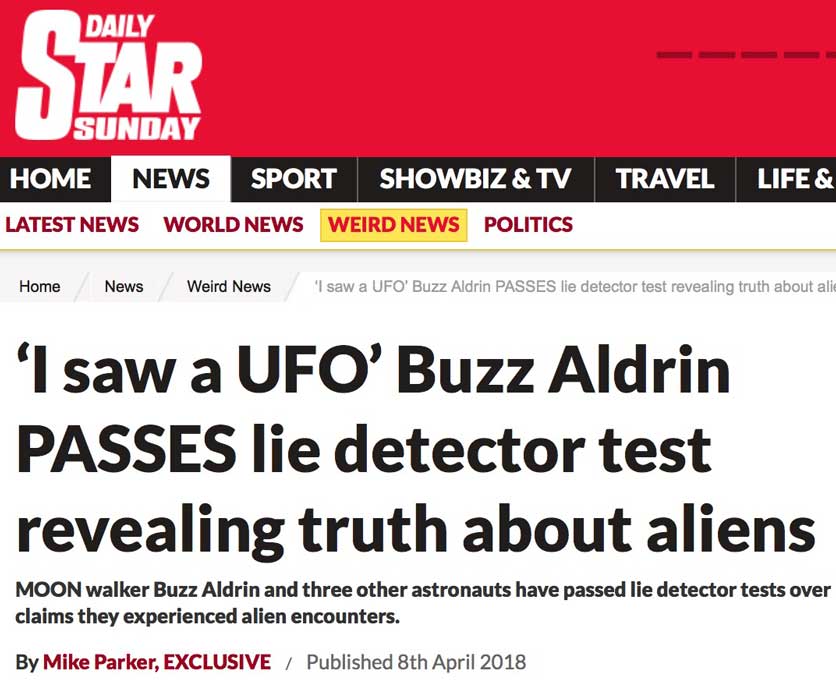 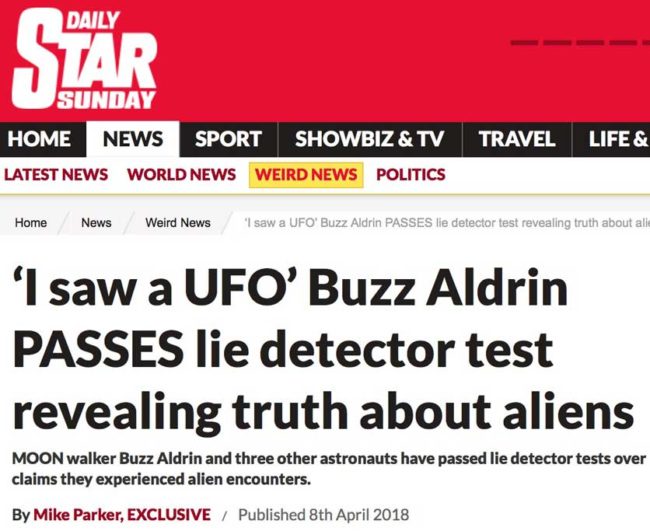 The UK’s Daily Star ran a story last Sunday in which they claimed that Buzz Aldrin not only saw a UFO when on his way to the moon, but actually passed a lie detector test and so it has all been confirmed …

… The Institute of BioAcoustic Biology in Albany, Ohio, carried out complex computer analyses of the astronauts’ voice patterns as they told of their close encounters.

Although the technology is still top-secret, these studies are claimed to be more reliable than current lie detector tests and could soon replace those used by the FBI and police.

BioAcoustic’s Sharry Edwards said tests reveal Aldrin is sure he saw the UFO even though his logical mind “cannot explain it”.

If you are a regular Daily Star reader then you will most probably have not noticed that almost every other media story relaying their scoop has pointed out that it is (to use a highly technical term) utter bollocks. Well OK, they used the word “nonsense”, I’m simply translating. For example see the UK’s Independent here, or the Washington Post here.

Are there any facts here?

In 2005 when being interviewed for a documentary titled First on the Moon: The Untold Story, Buzz Aldrin did supposedly see something strange that could not be  identified. What was presented in the documentary was not the whole story, the documentary makers cut out the conclusion and simply left in bits giving the impression the crew had seen an unidentified object and had no idea what it was.

In 2006 David Morrison, a NASA Astrobiology Institute senior scientist filled in the gap as follows during an online NASA “Ask an Astrobiologist” session. Somebody had asked about this, so David phoned up Buzz and talked to him about it, then came back with these details …

I just talked to Buzz Aldrin on the phone, and he notes that the quotations were taken out of context and did not convey the intended meaning. After the Apollo 11 crew verified that the object they were seeing was not the SIVB upper stage, which was about 6000 miles away at that time, they concluded that they were probably seeing one of the panels from the separation of the spacecraft from the upper stage. These panels were not tracked from Earth and were likely much closer to the Apollo spacecraft. They chose not to discuss this on the open communications channel since they were concerned that their comments might be misinterpreted (as they are being now). Apparently all of this discussion about the panels was cut from the broadcast interview, thus giving the impression that they had seen a UFO.

For a bit of further confirmation, on 15th Aug 2007 Buzz appeared on The Howard Stern Show. Quite naturally, the topic came up. Buzz confirmed that there was no such sighting of anything deemed extraterrestrial and said they were “99.9 percent” sure that the object was a detached separation panel.

In 2009 David Morrison went on to write an article for Skeptical Inquiry on the topic of UFOs and Aliens. As a NASA senior scientist he has access to everything inside and so was well positioned to explain things as follows from an insiders viewpoint…

To my knowledge, no NASA astronaut has ever reported seeing a UFO in space, let alone having a confrontation with aliens. However, this is not to say that no astronaut believes that alien visitations to Earth might be happening. Recently there were news reports that Apollo 14 astronaut Edgar Mitchell believes in the reality of some reports of UFOs. He has attended a number of meetings of UFO believers, and he asserts that some of these reports are true, and that the U.S. government and military are aware of these alien visits. However, Mitchell does not claim to have seen aliens himself. His astronaut colleagues tell me that he has always had an interest in the occult, and he even tried to conduct a parapsychology experiment on the way to and from the Moon. It is easy for a journalist to ignore Mitchell’s caveats about most UFO reports being untrue, or about not encountering an alien himself, to give the impression that he and other astronauts have had frequent encounters with beings from other worlds.

The Truth is Out there

What about that Lie detector test?

What the Daily Star does not reveal is that nobody was interviewed. The Ohio-based Institute of BioAcoustic Biology and Sound Health, is a nonprofit institution. They have software that can evaluate how truthful or confident someone feels about a subject they are talking about.

The Washington Post managed to dig up the precise details. There they explain …

…In an analysis, Edwards says Aldrin “has a firm belief in what he saw but logical awareness that he cannot explain what he saw; therefore he thinks he should be doubted.”

She said that the conclusion was published years ago but that she does not know how it became suddenly relevant.

But remember, that Buzz has also clarified his position on all this. The documentary makers cut out the bit where they explained their conclusion that it was a separation panel, and so the BioAcoustic analysis was conducted upon incomplete data.

Well OK, one last additional very obvious observation. The UK’s Daily Star is not a reliable source for anything.