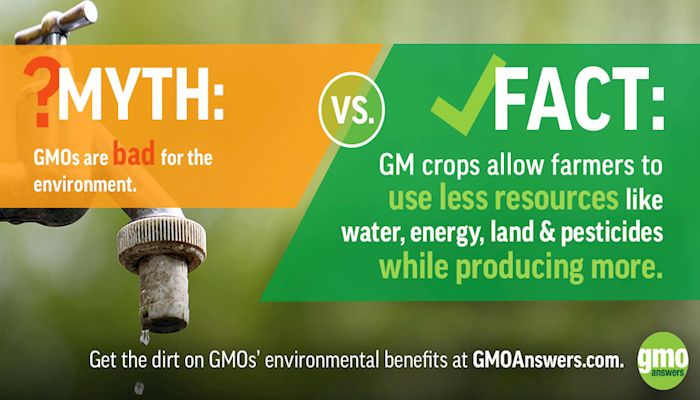 There is widespread agreement among scientists that genetically modified foods (GMO) are safe to consume. The truth is that they have the potential to provide substantial benefits to humankind. No really, there actually is a solid evidence-based scientific consensus …

There are several current efforts to require labeling of foods containing products derived from genetically modified crop plants, commonly known as GM crops or GMOs. These efforts are not driven by evidence that GM foods are actually dangerous. Indeed, the science is quite clear: crop improvement by the modern molecular techniques of biotechnology is safe. Rather, these initiatives are driven by a variety of factors, ranging from the persistent perception that such foods are somehow “unnatural” and potentially dangerous to the desire to gain competitive advantage by legislating attachment of a label meant to alarm. Another misconception used as a rationale for labeling is that GM crops are untested.

This publication summarises the results of 50 selected research projects on genetically modified organisms (GMO), co-funded by the European Commission under the Framework Programmes for Research and Innovation, and conducted in the period 2001-2010, including a summary of the latest Eurobarometer survey 2010 on Life Sciences and Biotechnology.

Beyond the scientific arena fear prevails along with a considerable degree of doubt and uncertainty. When it comes to GMOs the gap between the scientific consensus and public understanding is vast and unlike anything else.

When polled, 88% of scientists thought GM foods were safe to eat, while only 37% of the general public thought so.

A group of researchers have been asking themselves why it is like this, and so they looked into it.

Published on 14th Jan 2019, the title reveals what they discovered …

Permit me to repeat that. Those most opposed to GMO were quite sure that they knew far more about it all than anybody else. When they were tested, it was revealed that they in fact knew the least about it. These are people who argue from a position of complete and utter ignorance and are also quite oblivious to that.

Some really don’t understand how much they don’t know…

… Across four studies conducted in three countries, we found that extreme opponents of genetic engineering technology display a lack of insight into how much they know. …

Unlike Climate Change, GMO is not a political issue …

… for GM foods there are no interactions at all by political identification, which makes sense because this issue is not polarized along partisan lines the way climate change is. We take these results as evidence that knowledge and ideology both contribute to polarization and impasse around divisive science and policy issues. The relative strength of these forces seems to depend on the specific issue….

Education alone is not enough, you need to get people to understand that they have a GMO knowledge gap …

… A traditional view in the public understanding of scientific literature is that public attitudes that run counter to the scientific consensus reflect a knowledge deficit. Science communicators have made concerted efforts to educate the public with an eye to bringing their attitudes in line with the experts. These initiatives have met with limited success, which has led for calls to abandon this approach altogether. Our findings highlight a difficulty that is not generally appreciated. Those with the strongest anti-consensus views are the most in need of education, but also the least likely to be receptive to learning; overconfidence about one’s knowledge is associated with decreased openness to new information. This suggests that a prerequisite to changing people’s views through education may be getting them to first appreciate the gaps in their knowledge.

I have written extensively about GMOs (gentically modified organisms) here, and even dedicated a chapter of my book to the topic, because it is the subject about which the difference between public opinion and the opinion of scientists is greatest (51%). I think it’s clear that this disparity is due to a deliberate propaganda campaign largely funded by the organic lobby with collaboration from extreme environmental groups …

…Readers of this blog may recognize this pattern as the Dunning-Kruger effect (DK) – the less someone knows about a topic the greater they overestimate their knowledge. Actually the pattern the current authors found is even more extreme than DK. In DK self-estimation still goes down with objective knowledge, but the degree to which people overestimate their knowledge increases. The current study is super DK – at the extreme end of opposition to GMOs, opponents actually knew the least about genetics but thought they knew the most.

One further insight from Steve, who is a practising Neurologist, is this ….

A partial remedy is to build into your own behaviors safety valves that will protect you from falling down such holes. This means being skeptical of extreme claims, conspiracy theories, or claims to special knowledge. It also means – when you find yourself moving in one direction with regards to a controversy, deliberately slow down and seek out information from the other side. You don’t really know what is going on until you find out what all sides believe, and why, and how they respond to the claims of the other side.

The frequent example here is, imagine listening to just the defense or the prosecution in a trial, then making a decision without listening to the other side. How fair do you think your decision would be? You could be convinced of almost anything if you only listen to one side, and the more developed, sophisticated, and well-funded that side is, the more extreme of a view they can persuade you into.

Via the above podcast, Dr. Philip Fernbach from the University of Colorado discusses the results of his study, along with a deeper discussion into the ramifications of these findings as they apply to science communication.