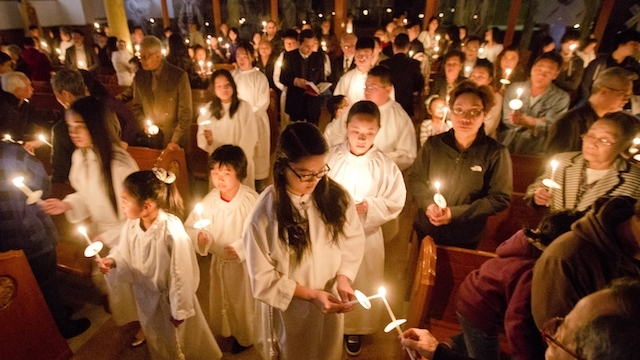 What do Catholics think about Catholic Priests? Roughly one month ago, in the lead up to Christmas 2018, Gallup conducted a poll of people that asked about the categories of professions that they trusted the most. They have been doing that every year for some time now. From that one we learned the following …

As for clerics in general, this is what they revealed …

Gallup has measured Americans’ views of the clergy’s honesty and ethics 34 times beginning in 1977, and this year’s 37% very high/high rating is the lowest to date. Although the overall average positive rating is 54%, it has consistently fallen below that level since 2009. The historical high of 67% occurred in 1985.

Positive views of the honesty and ethics of the clergy dropped in 2002 amid a sexual abuse scandal in the Roman Catholic Church, and although positive ratings rebounded somewhat in the next few years, they fell to 50% in 2009 and have been steadily declining since 2012.

They now have an update. What happens if they only looked at the views of Catholics and ignored everybody else? Well they did just that, they filtered out anybody who did not identify as Catholic and then crunched the numbers. The results were then published roughly about a week ago.

That last one is the big ticket item. To place that in context, here is a chart that illustrates what has happened over the years …

The background is that in August last year a Pennsylvania Grand Jury report detailed accusations of sexual abuse involving more than 300 Catholic priests over 70 years. The report indicated that Catholic bishops and other high-ranking church leaders covered up these incidents.

In other words, Catholic Sexual abuse was not simply a sorry saga of a few bad priests, but was also one in which the Catholic hierarchy had deliberately conspired to cover it all up. This apparently involved rather a lot of priests and also moving these abusers when caught to a different parish and so in effect it simply enabled the abuse to carry on. The scale of it all was deeply shocking and involved over 300 priests.

The inevitable is a huge collapse in response to the question amongst the Catholic community.

This is apparently the second time this has happened. Opinions previously fell sharply between 2014 and 2015. That 13-point drop from 57% to 44% followed the release of a study by the Catholic Church that found more than 4,000 priests had faced sexual abuse accusations in the prior 50 years

As you might perhaps anticipate, the decline is not just an immediate response, it is all part of a longer term trend …

Here is how they sum it all up …

Since the first high-profile sexual abuse allegations against Catholic priests emerged in 2002 in Boston, many similar cases have rocked the church, and 2018 brought another wave of such charges. Given the sheer breadth of the alleged and confirmed sexual abuse, the erosion of Catholics’ views of the clergy’s ethical standards is perhaps to be expected. The church’s handling of many of these cases undoubtedly weighs heavily on Catholics’ minds and likely plays a part in shaping their more increasingly negative views of the church and organized religion as a whole….

…Still, despite the turmoil, the percentage of Americans who self-identify as Catholic has been stable and a slim majority of Catholics still consider religion to be very important in their lives. That only one-third of Catholics who consider religion very important to them rate the clergy’s ethical standards highly seems to show that they are able to separate the institution from their own personal faith.

This persistent support is itself perhaps part of the problem. It enables the hierarchy to simply craft the illusion of action with words, but to not really do anything meaningful except to wait it all out and let the storm blow over in a generation or two. The reason Catholicism survives, and will continue, is because they can play a very long game.

Religion itself is highly potent. If any other organisation had been caught doing this, they would have been completely obliterated by everybody abandoning them.