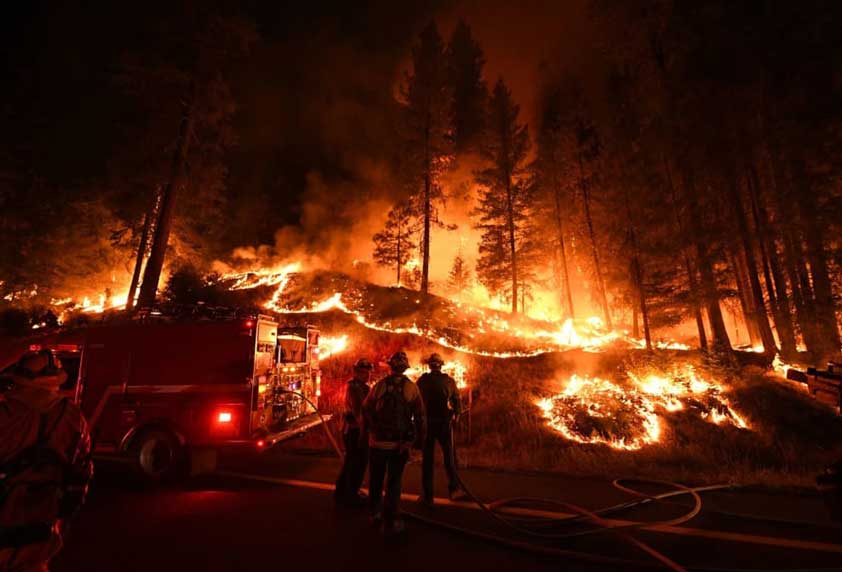 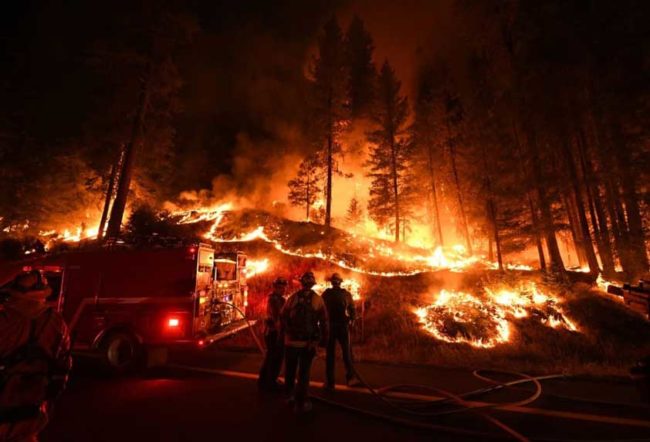 Governor Jerry Brown must allow the Free Flow of the vast amounts of water coming from the North and foolishly being diverted into the Pacific Ocean. Can be used for fires, farming and everything else. Think of California with plenty of Water – Nice! Fast Federal govt. approvals.

California wildfires are being magnified & made so much worse by the bad environmental laws which aren’t allowing massive amounts of readily available water to be properly utilized. It is being diverted into the Pacific Ocean. Must also tree clear to stop fire from spreading!

Insanely wrong as this is, it is actually all part of his ongoing disconnect with reality. About two years ago right in the middle of a Californian drought, his stance was that there was no drought …

In Fresno, Trump said he’d spent 30 minutes before his rally meeting with more than 50 farmers who complained to him about their struggles.

“They don’t understand – nobody understands it,” he said, declaring at one point: “There is no drought. They turn the water out into the ocean.”

Trump appeared to be referring to disputes over water that runs from the Sacramento River to the San Francisco Bay and then to the ocean. Some farmers want more of that flow captured and diverted to them.

You don’t need to push your imagination too hard to guess the responses to this latest stance. It can be summed up as “WTF is he babbling about now?”

.@CAL_FIRE says it has "no idea" what Trump's talking about in regards to "bad environmental laws" making California's fires worse.
"We have plenty of water for the firefight. The Mendocino complex is next to Clear Lake and the Carr fire has the Whiskeytown Lake and Lake Shasta" https://t.co/Gy0uNx3xiK

Un-frign-believable! You FINALLY mention the deadly wildfires in CA, but it's for political purposes, & you don't even offer condolences to victims or thank America's brave firefighters or acknowledge that Australia & New Zealand are sending theirs to help.https://t.co/OrkD0eNzVN

"Not enough water in dams" is not why California has wildfires. The reason is shorter, dryer wet seasons, longer, dryer and hotter dry seasons, and timber die-offs due to a combination of drought stress and invasive beetles. So Trump tells two lies to make that "point."

Here are a few related statistics …

Do you think perhaps he was watching the movie Chinatown and thought that it was a documentary on Californian environmental policy?

No wait, that’s just daft to suggest that. In that movie you had some old rich guy who also had the hots for his daughter. It is totally unrealistic to suggest any comparison there.

What do the Subject Matter Experts say?

They pointed out that Trump was partially correct and that he had a point … oh wait, that’s not how this played out.

What in the entire hell are you talking about? pic.twitter.com/7vgLjRNpSA

Ok. I know something about this.
This is gobbledygook bullshit.
California's forests and rangelands aren't dry & burning because of CA's water policies. There's no shortage of water to fight fires. And the little #water still flowing in rivers to the sea isn't wasted. https://t.co/2f1mljxDNW

It's Sunday. That means @realDonaldTrump is lying, again. There is more than enough readily available water in CA to fight the fires.

The truth is that wildfires across the United States started increasing in the 1980s. Some of this increase is attributable to climate change. https://t.co/K0V6bKT9Go

As @CALFIRE_PIO deputy director Daniel Berlant confirmed to @nytimes, "We have plenty of water to fight these wildfires." We need to talk about more important questions: where we build, how we build, how we prepare, and how we respond. https://t.co/c1G01Ids8B

What is really going on?

You probably already know the answer, but for completeness let’s have a tweet or two from real subject matter experts …

Brief but to the point, @NBCNightlyNews interviews me on the climate change context for understanding the epic California wildfires (starts at 3:43 in): https://t.co/fXgSuWS7FO

If you're looking for a more expansive discussion of climate change, California wildfires, and extreme summer weather events, tune into @NPR/@WBUR @OnPointRadio tomorrow morning 10-11AM, where we will have a full hour-long conversation about the topic! https://t.co/Q35lRM2DCN

My @washingtonpost op-ed today on the #CaliforniaWildfires, #water, and #climatechange.
"the president’s comments completely ignore the role of human-caused climate change as a growing factor in the extreme fires that the nation is now experiencing."https://t.co/xT6pyFhouB