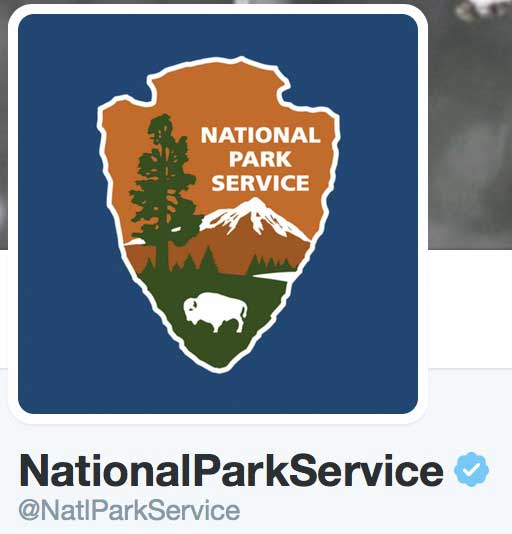 The short TL;DR; answer is probably not, and officially they continue to maintain a politically neutral position.

So what inspired the question?

The National Mall, the bit of land between the US Capital and the Lincoln Memorial, is officially managed by the US National Park Service. As you are no doubt aware, when Mr T turned up to swear the oath of office (by placing his hand on a book that actually contains a verse where Jesus is quoted as telling you not to do that – Matthew 5:34-37). There was more than a slight quibble regarding crowd sizes. Mr T and his press secretary claimed biggest ever, but pictures revealed that to not be factual.

The National Park Service official account retweeted a tweet that presented evidence that this claim by Mr T was a lie, oh and they also retweeted a tweet about what had just been scrubbed from the White House website as well … 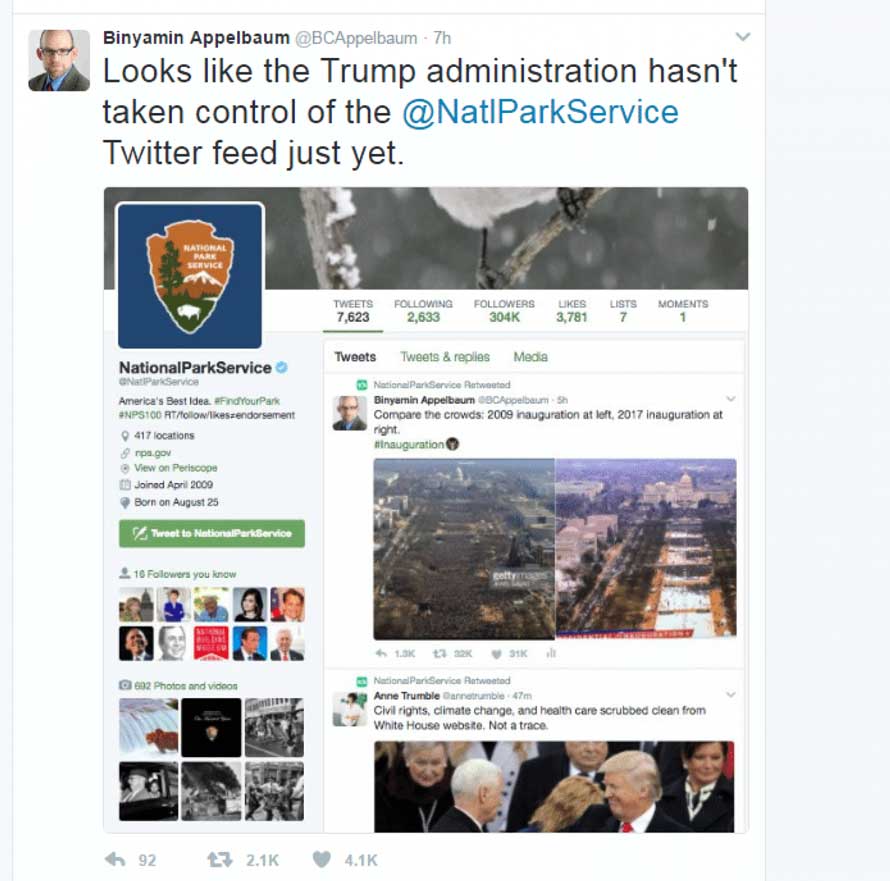 They administer the National Mall, they took the pictures, and so it can be argued that it was wholly within their remit to record the facts of history.

Alas, this was deemed way too much for some, and so the tweet was pulled and they officially apologised.

As you might anticipate, some suggested they should not have needed to do that. Facts are facts …

bullshit! Don't you dare apologize. Not about a POTUS & Congress ready to give up NPS lands who can't handle criticism. pic.twitter.com/oOGSMyyaqn

What also happened was a complete shutdown of all Interior Department social media accounts.

Why that happened is not entirely clear, but there were reports that the new administration had ordered the Interior Department to shutdown all social media as a response to the tweets. It was however claimed later by the NPS that this decision was taken internally …

In an email, Crosson said the shares were “inconsistent with the agency’s approach to engaging the public through social media.”

“The Department of Interior’s communications team determined that it was important to stand down Twitter activity across the Department temporarily, except in the case of public safety,” Crosson said in an email.

“Now that social media guidance has been clarified, the Department and its bureaus should resume Twitter engagement as normal this weekend.”

That explanation sounds reasonable, the NPS does park related information and not politics. It is right that they should strive to be politically neutral.

The rather embarrassing fact is that the Washington Post managed to obtain an initial email that was circulated within the NPS, and that clearly stated that this shutdown had been ordered by the new administration …

“All bureaus and the department have been directed by incoming administration to shut down Twitter platforms immediately until further notice,” said an email circulated to thousands of Interior employees.

The email, obtained by The Washington Post, described the stand-down as an “urgent directive” and said social media managers must shut down the accounts “until further directed.”

So clearly the new administration did indeed interfere as a response to being embarrassed by facts.

Clearly the NPS are not in a position to officially admit that this is what happened, and so with an appropriate apology along a statement that they don’t do politics, they are back in business.

We regret the mistaken RTs from our account yesterday and look forward to continuing to share the beauty and history of our parks with you pic.twitter.com/mctNNvlrmv

On Tuesday I was seeing tweets coming from the @BadlandsNPS twitter account, but they were soon purged.

The story there (officially) is that …

The tweets were posted by a former employee and officials decided to delete them because the account had been “compromised,” a National Parks official said.

I have no idea what to make of that official response expect to perhaps think that it was the tweets themselves that flipped the employee into “former” employee mode.

If correct, then the rather disturbing observation is that tweeting scientific facts about #climate is now a career decision within the National Park Service under the new administration.

That naturally leads to two items.

Do you need help to leak information?

A rather worried about the trend that is starting to take shape.

If you are inside the EPA, the Department of Agriculture, or some other branch, have a gag order in place, and have important information that needs to be in the public domain, then there are ways.

Do you need help because you now face being fired from a Government position?

If you are a government scientist who now faces being fired, and are not sure how you can reach out for help, then perhaps this might help …

I'm building a network of scientists to help government scientists & sci communicators who inevitably will be fired https://t.co/MruHqKcMgn pic.twitter.com/jdlLXWnpbK