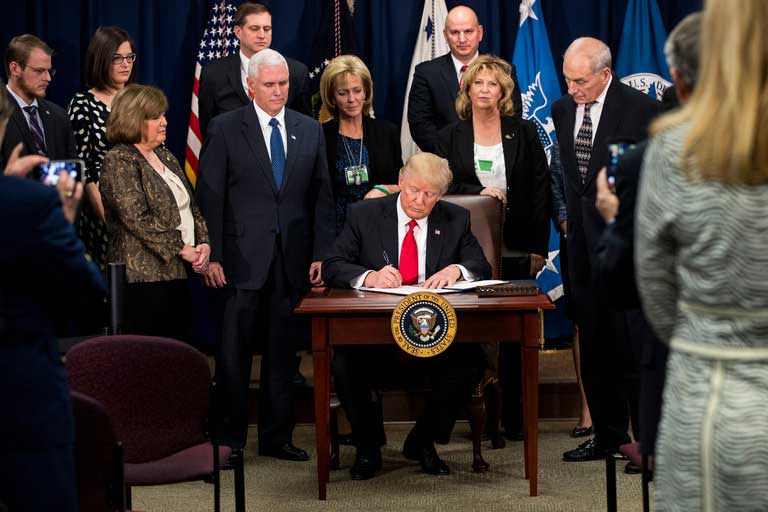 In these “interesting” times, I do wonder if I need to send a thank you note to Mr Trump because if he was not around I might have nothing to write about.

OK, so let’s ponder over Mr Trumps latest folly, a wall that will cost billions.

Why is it being built?

It is basically a con job designed to appease many into thinking that some meaningful action is being taken.

The fear being pandered to is a belief that illegal immigrants are pouring over an open border into the US.

The statistics are hard to verify, but they are out there.

Of the 11-12 Million illegal immigrants that are in the US today, it has been estimated that many did not actually sneak across the border …

The Pew Hispanic Center has previously estimated that there are between 11.5 and 12 million unauthorized migrants in 2006.1 The calculations reported in this fact sheet suggest that roughly 4.5 to 6 million or 40 to 50% of the total entered the country legally through ports of entry. Of them, some 4 to 5.5 million entered with nonimmigrant visas, mostly as tourists or business visitors, and another 250,000 to 500,000 entered with Border Crossing Cards.

In other words, building a physical wall does not really address the issue that it claims to address. Millions of People with short stay cards or tourist visas simply arrived legally and then failed to go home.

Will Mexico Pay for this wall?

Officially the response to that question from Mexico can of course be summed up with just two words, of which the second is “off”.

So what is the plan here?

As noted by journalist Gregory Korte, probably something like this …

Per his executive order, here's how President Trump intends to make Mexico pay for the border wall: pic.twitter.com/iA51qd7cLm

So how much aid does Mexican get from the US?

The actual cost of the proposed wall will far exceed that, (some estimates put it in the range of $7-15 billion), so simply threatening to cut off aid takes you right back to Mr Pena Nieto utilising diplomacy to in effect quite understandably deploy the two word phrase of which the second word is “off”.

What is also rather obvious is that this will greatly damage the existing US-Mexico relationship, and that will have potential economic implications for the US. It has already led to Mr Nieto cancelling a previously planned state visit to the US on 31st. That cancellation is not really a surprise after Trump more or less told him via Twitter to F*** Off if he did not intent to pay for the wall.

Needless to say, this is not exactly a great way to nurture a productive relationship with a neighbouring state. No doubt such blunt and brutal exchanges between nations do happen, but generally not via twitter.

Associated with all this is a proposal to ban on entry for individuals from specific nations, namely … Iraq, Syria, Iran, Sudan, Libya, Somalia or Yemen.

It is perhaps worth noting that acts of terror have been committed by individuals from distinctly different nations, namely …

of the 21 terror attacks that are listed by Wikipedia as having taken place on US soil since (and including) September 11 2001, the nationalities of known perpetrators, based on country of birth, have been:

Thus of the around 40 known perpetrators of terrorist attacks on US soil since September 11 2001, only one was born in a country on Mr Trump’s current list, and even he became a naturalised US citizen aged two

There have been no terrorist attacks on US soil by individuals born in Syria, Iraq, Libya, Somalia, Sudan or Yemen since 9/11, and all six of these countries are experiencing humanitarian crises.

In one sense, we have been here before. It all has distinct echoes of the response to 9/11 where there was an invasion of a nation that had nothing to do with 9/11, all on the basis of a complete lie, and executed without any thought being given to what the creation of such a power vacuum might do.

The Impact of Walls … they don’t make things better, but instead worse.

A rather interesting take on it all is the observation raised by an article here, that lays out a case for not having any wall at all.

Before the wall existed, men would cross, work in the US, then return home. Once barriers started to be errected and it because hard to cross, then those that arrived tended to stay because the wall not only made in difficult to enter the US, it also made it difficult to leave again.

From 1965 to 1985, estimates indicate that 86 percent of undocumented entries were offset by departures, and the undocumented population grew slowly, rising to just under 3 million over two decades.

…Although the intent of border enforcement was to discourage migrants from coming to the United States, in practice it backfired, instead discouraging them from returning home to Mexico. Having experienced the risks and having paid the costs of gaining entry, undocumented men increasingly hunkered down and stayed in the United States, rather than circulating back to face the gantlet once more. As a result, the rate of return migration began to fall after 1986 and accelerated with the launching of the border operations in 1993 and 1994.

Because net migration equals the difference between those entering and leaving the United States, the falling rate of return produced a huge increase in the net volume of undocumented migration. Through the 1990s and early 2000s, in other words, the United States spent billions of dollars, only to double the rate of undocumented population growth. Not only that, but Operation Gatekeeper’s diversion of migrants away from California and into Arizona prompted them to continue onward to new destinations throughout the United States.

Building walls because of a threat from “them” also panders to a fear of foreigners, and just to ensure that fear of stoked up and kept simmering, Mr T has also announced that he intends to publish weekly lists of crimes committed by foreigners.

The US President issued an executive order on Wednesday titled “Border Security and Immigration Enforcement Improvements” which signed into law many of his most extreme immigration policies,.

It included an instruction that the Secretary for Homeland Security should “on a weekly basis, make public a comprehensive list of criminal actions committed by aliens” in the US.

… and so that quite naturally leads to wholly appropriate criticism …

Human rights groups have expressed alarm over Donald Trump’s decision to publish a weekly list of crimes committed by immigrants in the US, saying the “shocking” and “xenophobic” move will “terrorise communities across the US”.

None of this should be a surprise. His entire campaign was one long xenophobic rant that demonised immigrants and so that is now being incarnated into reality.

Seriously, what exactly did you expect him to actually do?

To those that actually voted for Trump because he was supposedly not as bad as Hillary, have you worked out how F**king stupid you have been yet?

Perhaps not because denial is still kicking in.