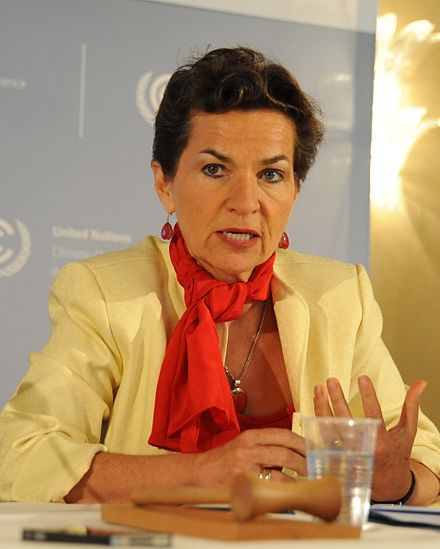 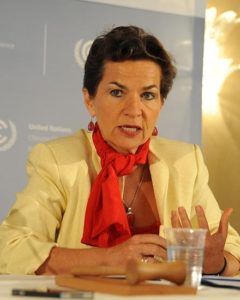 The Costa Rican diplomat Christiana Figueres is perhaps best known for one thing, the Paris Climate Agreement. In other words, in the long historical view she may actually be one of the most important humans alive today because she has potentially saved our species. In 2010, roughly about six months after the failure of COP15 in Copenhagen she was appointed as Executive Secretary of the UN Framework Convention on Climate Change (UNFCCC). After six years of dedication to not only the formal process, but to also effectively reaching out to many others to make it all happen, the truly historical Paris Agreement was signed. She has since retired from that role, but has not relinquished her passion or dedication.

A few days ago, she along with six colleagues published in Nature a six point plan to get the world out of the carbon emitting business. The big news there is that they highlight that the window of opportunity for meaningful action is fast closing and we have about three years left.

Three years to safeguard our climate …

The year 2020 is crucially important for another reason, one that has more to do with physics than politics. When it comes to climate, timing is everything. According to an April report1 (prepared by Carbon Tracker in London, the Climate Action Tracker consortium, the Potsdam Institute for Climate Impact Research in Germany and Yale University in New Haven, Connecticut), should emissions continue to rise beyond 2020, or even remain level, the temperature goals set in Paris become almost unattainable. The UN Sustainable Development Goals that were agreed in 2015 would also be at grave risk.

That’s why we launched Mission 2020 — a collaborative campaign to raise ambition and action across key sectors to bend the greenhouse-gas emissions curve downwards by 2020 (www.mission2020.global).

The timing of this makes it clear that the specific audience for this is the G20 summit that will soon take place 7–8 July in Hamburg. They are the decision and policy makers who can make this happen, and so this is a message for them.

Is this date political hype or is there some substance to it?

The thinking is this. The 1.5 C / 2 C limit is perceived to be a tipping point and if we go beyond that then we potentially face serious climate challenges. The back of the envelope calculations are as follows …

The magnitude of the challenge can be grasped by computing a budget for CO2 emissions — the maximum amount of the gas that can be released before the temperature limit is breached. After subtracting past emissions, humanity is left with a ‘carbon credit’ of between 150 and 1,050 gigatonnes (Gt; one Gt is 1 × 109 tonnes) of CO2 to meet the Paris target of 1.5 °C or well below 2 °C (see go.nature.com/2rytztf). The wide range reflects different ways of calculating the budgets using the most recent figures.

At the current emission rate of 41 Gt of CO2 per year, the lower limit of this range would be crossed in 4 years, and the midpoint of 600 Gt of CO2 would be passed in 15 years. If the current rate of annual emissions stays at this level, we would have to drop them almost immediately to zero once we exhaust the budget. Such a ‘jump to distress’ is in no one’s interest. A more gradual descent would allow the global economy time to adapt smoothly. 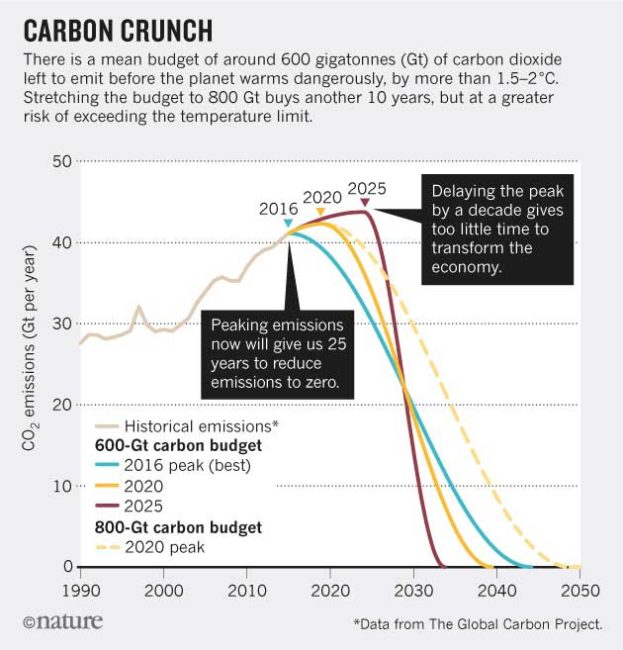 One other rather worrying observation is that these are not the pessimists, they are the optimists. Other voices are saying it may in fact already be too late …

“I have said for quite a while now that I don’t think 2C is possible, I would like to be wrong, and I am happy to aim for 2C or lower. But, I can’t look people in the eye and give them false hope.” – Glen Peters, an expert on carbon budgets and climate change at the Center for International Climate Research in Oslo

What is the six point plan that has been proposed for the G20?

Why re-hash it, when I can simply cut and paste the original (which is here in Nature, and also here on the M2020 website) …

These goals may be idealistic at best, unrealistic at worst. However, we are in the age of exponential transformation and think that such a focus will unleash ingenuity. By 2020, here’s where the world needs to be:

Infrastructure. Cities and states have initiated action plans to fully decarbonize buildings and infrastructures by 2050, with funding of $300 billion annually. Cities are upgrading at least 3% of their building stock to zero- or near-zero emissions structures each year9.

Transport. Electric vehicles make up at least 15% of new car sales globally, a major increase from the almost 1% market share that battery-powered and plug-in hybrid vehicles now claim. Also required are commitments for a doubling of mass-transit utilization in cities, a 20% increase in fuel efficiencies for heavy-duty vehicles and a 20% decrease in greenhouse-gas emissions from aviation per kilometre travelled.

Land. Land-use policies are enacted that reduce forest destruction and shift to reforestation and afforestation efforts. Current net emissions from deforestation and land-use changes form about 12% of the global total. If these can be cut to zero next decade, and afforestation and reforestation can instead be used to create a carbon sink by 2030, it will help to push total net global emissions to zero, while supporting water supplies and other benefits. Sustainable agricultural practices can reduce emissions and increase CO2 sequestration in healthy, well-managed soils.

Industry. Heavy industry is developing and publishing plans for increasing efficiencies and cutting emissions, with a goal of halving emissions well before 2050. Carbon-intensive industries — such as iron and steel, cement, chemicals, and oil and gas — currently emit more than one-fifth of the world’s CO2, excluding their electricity and heat demands.

Finance. The financial sector has rethought how it deploys capital and is mobilizing at least $1 trillion a year for climate action. Most will come from the private sector. Governments, private banks and lenders such as the World Bank need to issue many more ‘green bonds’ to finance climate-mitigation efforts. This would create an annual market that, by 2020, processes more than 10 times the $81 billion of bonds issued in 2016.

If we delay, the conditions for human prosperity will be severely curtailed. There are three pressing and practical steps to avoid this.

First, use science to guide decisions and set targets. Policies and actions must be based on robust evidence. Uncensored and transparent communication of peer-reviewed science to global decision-makers is crucial. Academic journal articles are not easily read or digested by non-experts, so we need a new kind of communication in which Nature meets Harvard Business Review. Science associations should provide more media training to young scientists and hold communication boot camps on how to make climate science relevant to corporate boards and investors.

Those in power must also stand up for science. French President Emmanuel Macron’s Make Our Planet Great Again campaign is a compelling example. He has spoken out to a global audience in support of climate scientists, and invited researchers to move to France to help accelerate action and deliver on the Paris agreement. To encourage others to speak, scientists should forge connections with leaders from policy, business and civil society. The Arctic Basecamp at Davos in January, for instance, brought scientists into high-level discussions on global risk at the World Economic Forum’s annual meeting in Switzerland.

“The fossil-free economy is already profitable.”

Second, existing solutions must be scaled up rapidly. With no time to wait, all countries should adopt plans for achieving 100% renewable electricity production, while ensuring that markets can be designed to enable renewable-energy expansion.

Third, encourage optimism. Recent political events have thrown the future of our world into sharp focus. But as before Paris, we must remember that impossible is not a fact, it’s an attitude. It is crucial that success stories are shared. Demonstrating where countries and businesses have over-achieved on their targets will raise the bar for others. More-ambitious targets become easier to set.

While this proposed course of action might of course inspire and encourage you as an individual, this is specifically designed to motivate the participants attending G20 to act boldly, decisively, and also truly meaningfully in a manner that is in the best interests of us all.

One last thought. Before I finish I can perhaps point out the truly sweet taste of the passing implicit reference to the utter irrelevance of Mr T and his pack of climate denying dinosaurs who remain completely oblivious to the rapidly descending meteor …

There will always be those who hide their heads in the sand and ignore the global risks of climate change. But there are many more of us committed to overcoming this inertia. Let us stay optimistic and act boldly together.