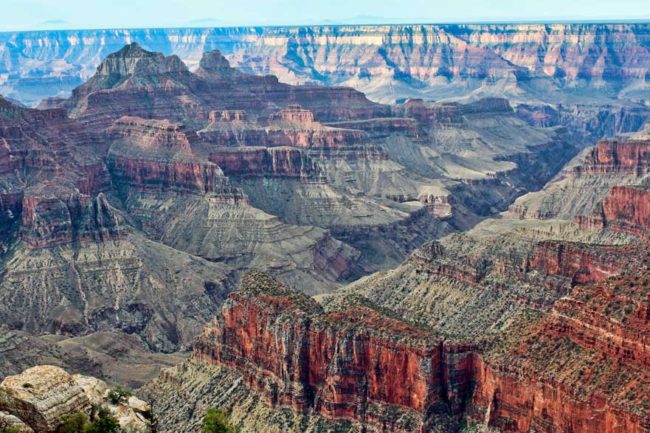 Back in 2014 a geologist named Andrew Snelling who works for Answers in Genesis, the Young Earth Creationist organisation, formally applied to the National Park Service for a permit to remove rock samples from the Grand Canyon. You can find his actual permit application buried in a subsequent lawsuit that he made when his application was rejected.

Since we know that he is works for Answers in Genesis, the folks that believe that planet earth is only 6,000 years old, then the turn of phrase “document evidence of the nature and timing of the folding” means that he wants to do the usual religious thing of claiming that Noah’s flood caused it. Turning up and gathering a few rocks is to craft the illusion of this being a “scientific” analysis, and so there is nothing that is actually scientific going on here at all.

What did the park service make of his application for a “scientific” permit?

They rejected his application.

The AiG response was that he was being discriminated against …

the civil liberties of geologist Dr. Andrew Snelling were violated when he was twice denied a permit by Grand Canyon National Park (GCNP) to continue his research at the canyon due to his religious and scientific views.

Sarah Zhang wrote up a summary within the Atlantic …

The park solicited peer reviews from three mainstream geologists. One mentioned the rocks could be found elsewhere; all three overwhelmingly denounced the work as not scientifically valid, a criterion the park also uses to evaluate proposals. Snelling, who holds a Ph.D. in geology, did not disclose his Answers in Genesis affiliation, nor did he explicitly say he wanted to prove the Grand Canyon is young

In other words, the application got bounced because what he proposed to do was nonsense and not because he was being discriminated against for holding specific religious beliefs.

Hemant Mehta wrote up a lot of detail and has the feedback provided by of one of the reviewers, University of New Mexico professor Dr. Karl Karlstrom …

My overall conclusion is that Dr. Snelling has no scientific track record and no scientific affiliation since 1982. I do not see this proposal as a scientifically valid research proposal. It is not well formulated based on current knowledge of Grand Canyon geology, the nature of microstructures of soft sediment structures in general, nor of the microstructures and mode of formation of monoclines. The proposed work does not seem to me to be of the scientific standard required for a Park research permit, and in any case, would not need to be done in Grand Canyon.

Having been rejected, he decided to sue for discrimination, and so filed a lawsuit  …

The complaint argues that because of his “Christian faith and scientific viewpoints informed by his Christian faith,” Dr. Snelling’s application for a research permit was unconstitutionally rejected by the GCNP.

… eh yes, but the problem is not his specific Christian faith, but the proposed permit application itself. It was not a legitimate proposal for some credible scientific work and he is not a credible researcher in the field.

How did the Park Service respond to the lawsuit?

The title more or less tells you what has now happened.

When faced with a lawsuit, the Park Service rolled over and approved his permit and so the lawsuit has now been dropped.

You might argue that the Park Service permit for him is not appropriate, but to be honest I do actually support their response. In a world where they have limited resources and limited funds, I would far rather see them focused on what really matters and not blow vast sums of cash on absurd lawsuits.

In other words, “F**k it, let the nut go collect a few rocks, we have better things to do” is a wholly pragmatic and sensible response.