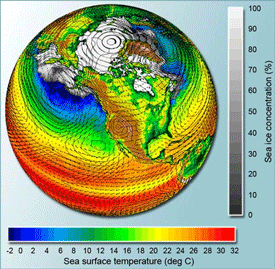 John Christy of the University of Alabama in Huntsville (UAH) is perhaps best known for his specific interest in the satellite remote sensing of global climate change. The climate change denial community love and adore him because he and several others are staunch critics of the climate models. He not only maintains the stance that they are not reliable, but uses that as the foundation for his assertion that the prevailing scientific consensus on global warming is wrong.

There are fundamental problems with the stance he takes, and I don’t mean that people do not like what he says, but specifically with the data he uses to justify it. He does however highlight something that cannot be ignored. Dana Nuccitelli sums it up in a recent Guardian article as follows …

Whenever they hold one of their frequent hearings to reject and deny established climate science, congressional Republicans invariably trot out contrarian scientist John Christy, who disputes the accuracy of climate models. In doing so, Christy uses a cherry-picked, error riddled chart, but there’s a nugget of truth in his argument. Although the discrepancy isn’t nearly as large as Christy’s misleading chart suggests, atmospheric temperatures seem not to have warmed quite as fast since the turn of the century as climate model simulations anticipated they would.

Now let’s step back a second and place all this in context. This is not a dispute about ground based measurements, but instead is specifically about a divergence between modelled projections and actual satellite data for the troposphere.

This is all a very complex area and so you need to handle the satellite data with considerable care. You can’t treat data collected by the same satellite for the same area asis, it needs to be massaged. Let me explain why. The satellites are designed to collect data at the same time, but orbits degrade and so a reading ten years ago for New York at 2pm might today be collected at 10pm and so you need to adjust for variations like this. Rather obviously this is because a reading taken at 2pm will differ than a reading for the same area taken at 10pm.

As one satellite replaces another you also need to consider instrument variations and handle that.

Assumptions need to be made to handle all that and more, so different assumptions applied to the same raw data will result in different results.

“In general, I think that the surface datasets are likely to be more accurate than the satellite datasets. The between-research spreads are much larger than for the surface data, suggesting larger structural uncertainty.” – Dr Carl Mears, the co-founder of RSS

This sets the stage for the debate regarding the discrepancy between model projections and the processed satellite data – are the models seriously flawed, or is there something else in play here that explains the discrepancies?

Why do Observed trends from Satellites diverge from Modelled projections?

Christy’s stance is that the models are flawed. He took that stance to the extreme position of a complete dismissal as follows when he testified before the House science committee as follows …

the average of the models is considered to be untruthful in representing the recent decades of climate variation and change, and thus would be inappropriate for use in predicting future changes in the climate or for related policy decisions

The basis for his thinking like this is his speculation that the climate models themselves are flawed and are too sensitive to a rise in greenhouse gases.

The discrepancy exists and so it needs to be looked into. That is precisely what has now been done.

The results of a study that looked into this very question are now available within Nature Geoscience.

The conclusion they have come to is that there is no one cause here for these discrepancies, and it is instead a combination of different things including internal variability and also that the models got some climate forcings wrong.

Prior to 2005 the climate models use actual measurements for specific things such as greenhouse gas concentrations, solar output, volcanic eruptions, air pollution. All of these impact model projections. As you simulate the future you need to guess and make assumptions about those forcings, but events happen that can alter how they actually play out. For example an uptick in pollution from Chinese coal plants. They got some of those forcings wrong.

Lessons have been learned, but then that is part of a process that never really stops, it is a highly iterative process. Your run a model, then you compare your projection with reality, if it differs, then you work out why and tune it to handle that in the next cycle.

When such discrepancies happen, those with an emotional commitment to a rejection of the prevailing consensus will rapidly grasp and then deploy them as a tool to manipulate within the political and public arena. The observed response when faced with such discrepancies is in many ways a ruler that measures how people think about things. Some will be interested in understanding what is actually going on and will honestly consider any and all possibilities. For others with a preconceived conclusion, confirmation bias kicks in and so it is interpreted as “evidence” that verifies what they have already decided.

Meanwhile, as Dana points out …

The climate models themselves are still quite accurate, and paint a frightening picture of where we’re headed if we follow the status quo scenario of burning lots of fossil fuels. But if we can reduce human carbon pollution, we’ll shift to a scenario with a long-term global warming slowdown.

1 thought on “Are the Climate Change Models seriously flawed?”