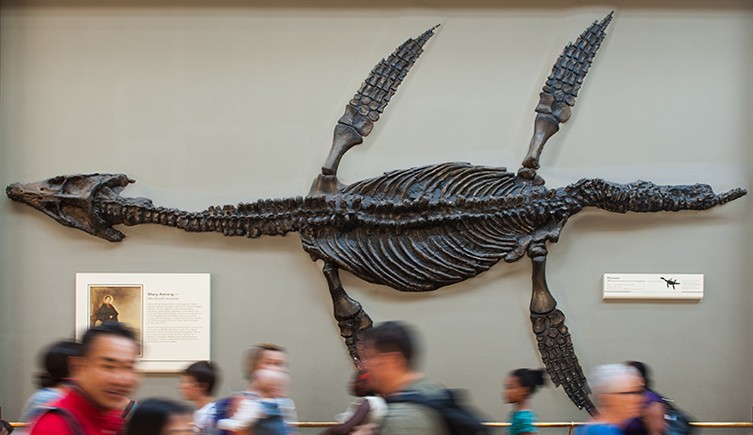 The south west coast of the UK is officially the Jurassic coast. That’s not tourist hype, it is an official World Heritage Site that stretches from Exmouth in East Devon to Studland Bay in Dorset. If you ever visit the Natural History museum in London then you will be able to view some of the amazing fossils from there such as the above ichthyosaur.

Today’s posting is not just about this, but also about a local family that kept an ichthyosaur specimen in their back yard a secret for 150 years for religious reasons.

More on that in a moment. First let me introduce you to Mary.

Perhaps the most famous individual associated with the Jurassic Coast is Mary Anning. Born in 1799, she lived on the coast in the small town of Lyme Regis. Her family was very poor, hence after the death of her father at the age of 11 she helped the family out by searching for fossils along the cost that could be sold to tourists. At that time the town had developed into a popular seaside resort. Because of the European revolutionary war, rich english tourists tended not to go to Europe and instead went to towns like Lyme Regis instead.

Over time Mary’s understanding and skills grew and flourished. Completely self-taught she poured over the scientific journals of the day and developed a deep understanding – so much so that she became well known in geological circles in Britain, Europe, and America, and was consulted by many as a subject matter expert. Sadly she was never formally recognised because she was guilty of the “crime” of being female.

Charles Dickens writing about her in 1865 is quoted as follows …

“[t]he carpenter’s daughter has won a name for herself, and has deserved to win it.”

As you can see from the picture at the top of this posting, it was not all theory. She discovered some truly amazing fossils, hence is now recognised as a pioneering palaeontologist who opened a window that helped change scientific thinking about prehistoric life and the history of the Earth.

The Idea of Extinction and the emergence of new species

Not everybody responded all that well to the discovery of specimens such as the ichthyosaur. It was very clear evidence that challenged the idea that God had created the world as we see it today. Concepts such as the extinction of a species and the slow emergence of new species over vast tracts of time was simply unthinkable for some because it conflicted with the dominant religious beliefs.

Anning’s discoveries became key pieces of evidence that struck a major blow against the prevailing religious ideas. Even when faced with the obvious, some people would still cling to the idea of a perfect creation and that these creatures were part of that, hence still lived somewhere else in some remote undiscovered part of the planet.

Publications such as Mantell’s 1831 publication entitled “The Age of Reptiles” changed minds. This was not simply because he had a good argument, but because there was physical evidence – the ichthyosaurs, plesiosaurs, and pterosaur found by Anning.

One recent bit of news concerns the emergence of a new Jurassic fossil that has been kept secret by one family for almost 150 years. Pictured above you can see that the cleaned up specimen is a truly amazing one.

…Julian Temperley knew that a Jurassic period 90 million-year-old ichthyosaurus fossil was buried in the garden at his family’s home in Thorney, Somerset….

…his god-fearing ancestors kept it hidden for years after its discovery in 1850, worried they would be ‘denying God’ by flashing it around.

What changed is that after watching a TV programme about David Attenborough digging up an ichthyosaurus with professional fossil collector Chris Moore at Lyme Regis he began to appreciate that what was buried in his back yard should be preserved, so he contacted Chris Moore in Lyme Regis (not too far from where he lived). Chris was blown away and said it was one of the best specimens he’d ever seen.

How did this ichthyosaur end up being buried in his back yard?

“It was found either by William Philosophus Bradford or John Wesley Bradford – my great-great-grandfather or his father – in around about 1850 in their lime quarry at Pitsbury near Langport.

“Not only were the two men founders of the now well-known Bradford’s builders’ merchants but they were also ardent Christians back in times when Darwin’s ‘Theory of Evolution’ had yet to hit the streets.

“They dug up sedimentary rock and burned it for the lime – and it was while they were digging in the quarry that they came across the ichthyosaurus. They took it home and buried it.

“You have to remember that fossils weren’t really explained until Darwin came along.

“Up until then, if you believed in fossils you were denying the Bible saying God created Day One, and so on.

Where is it now?

Julian owns it. He could sell it on eBay, but that is not what has happened. Instead this has …

“We will now keep it on the wall of our cider brandy bond where it will be part of the family history.

“An image of the Temperley ichthyosaurus will also go on the label of our next 20-year-old cider brandy.

“Putting it with ageing spirits seems like the right thing to do.”

Now that’s a truly good ending for such a nobel creature that reaches out to us from deep time.

I’ll raise a glass or two to that ending. His cider company is this one. Incidentally Julian is not a Boris fan and not a Trump fan, so is most definitely my kind of guy.